Initial analysis of mating live weights and BCS for the mature ewes from eight of the lowland BETTER sheep flocks is presented in Table 1. Overall ewe BCS is generally very good which is a reflection of the attention the flocks have given to assessing and managing ewes for the previous two months. Where ewe lambs are being mated the ram will be joined with these 2-3 weeks after the rams are joined with the mature ewes. All of the lowland flocks are closely following their autumn closing plan which is a vital to ensuring that there is sufficient grass available at lambing time next year. Grass growth rates and utilisation were good for the most part in October. As winter nears planning for winter feeding is also under way and silage analysis will be carried out in the next few weeks.

All of the hill flocks will have their ewes weighed and condition scored in the coming weeks prior to the ram being joined with the ewes. Gathering of these ewes has not begun at the time of writing but it is hoped that after the comparatively good weather conditions over the past few week’s ewes will be in good BCS coming in off the hills. 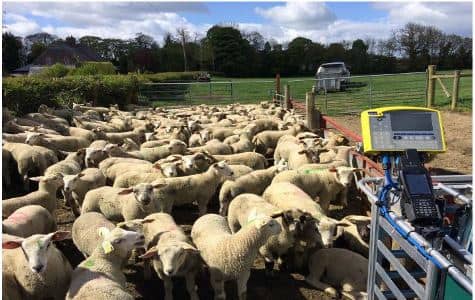 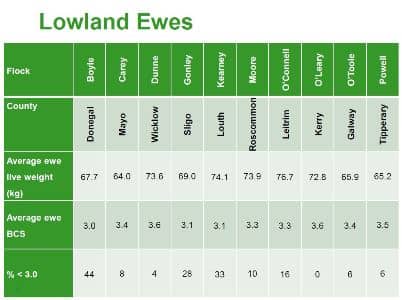 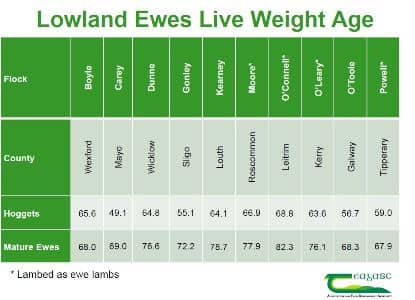 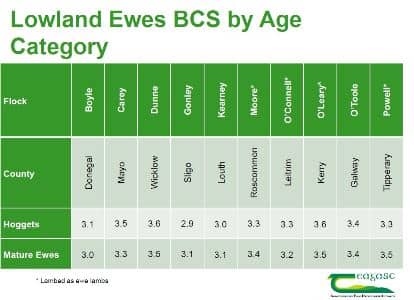 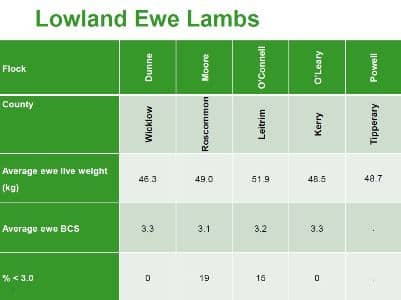 Grass growth rate have been exceeding demand for the lowland flocks throughout the end of July and into August. For the lower stocked flocks this presented a greater challenge to manage compared to the flocks at their targeted stocking rate but the strong grass growth rates has meant that silage supplied across the flocks are good after a slow start for some due to the dry conditions earlier in the year. Lamb drafting is continuing on the flocks with some of the flock’s supplementing heavier ram lambs at grass. The end of July/early August also saw a sharp increase in faecal worm counts on some of the flocks and lambs have been dosed accordingly, but the sharp increase highlighted the importance of carrying out faecal egg counts to assess worm burdens in lambs.

Table 1. Lamb performance from 3 of the Teagasc BETTER hill sheep flocks from birth to 14 weeks (weaning).

The hill flocks weaned their lambs during August and a summary of the weights is presented in Table 1 from three of the flocks. Overall, the performance of lambs was along expected lines with the farmers happy with how lambs had done since the 7 week weights. A breakdown of the lamb weights by weights category (e.g. how many are over 30kg how many are less than 25kg etc.) will be used in conjunction with available grass supplies on the farm and assessing current store lamb prices to make a decision as to how many, if any, lambs will be finished on farm and how many sold as stores.

At the time of writing nearly all of the 7 week weights from the mature ewes on the lowland flocks have been collected. Table 1 shows the mean birth weight, growth rate to seven weeks and 7 week weight for five of the lowland flocks weighed in early May. Growth rates for the lambs to seven weeks are on target with lambs generally performing well so far this year. The key for these flocks will be to maintain grass quality in front of the ewes and lambs up to weaning.

*Born as triplets and reared as twins

Grass growth rates have on average being steady at approximately 55kg DM/Ha in the first half of May on the farms but with a wide variation most weeks. Comparatively long periods of dry weather for this time of year in some parts of the country are slowing grass growth rates on some of the farms. A number of the farms made silage in early May, mainly as a result of dropping out surplus paddocks from the rotation. When the data from PastureBase Ireland for the BETTER sheep flocks is examined it shows that the total grass grown per hectare this year is very similar to 2018 and approximately ½ a tonne less than where it was at this time in 2019.

The first weighing of lambs from the hill flocks will take place in the coming weeks with anecdotal evidence from the flocks suggesting that lambs are doing well so far this year. Where possible the flocks have begun letting single rearing ewes and their lambs back out to the hill.