The GenderSMART project is a €2.9 million EU Horizon 2020 funded project which commenced on 1st January 2019.  The aim of the project is to achieve gender equality in research performing and research funding organisations operating in the agriculture and life science research and teaching fields.

As part of the project, Teagasc collaborated with other European research partners, as set out below, to develop and implement a Gender Equality Plan. Altogether, there are 9 partners from 8 EU countries involved in the project:

The above named institutions were supported in developing their Gender Equality Plans by two technical partners specialising in institutional change and mainstreaming a gender-balanced culture:

The role of Teagasc within GenderSMART

The Gender Equality Plan of every institution has four key objectives, which are also the overarching themes of the project:

The project will address these four objectives through dedicated thematic work packages (WP). Although this is a collaborative approach, each organisation will spearhead their own thematic work package. Teagasc has taken the lead on delivering Work Package 3, which centres around building a Gender Equality Culture.

In building a culture of gender equality, Teagasc will focus on:

In addition to collaboration between partner institutions, the GenderSMART project also aims to collaborate with ‘sister projects' and share knowledge.  These are other EU funded projects focusing on addressing gender equality in research and include such projects as ACT, BALTIC GENDER and CALIPER.

The final dissemination event for the GenderSMART project will take place in Brussels, Belgium on the 18th and 19th October 2022.  This will feature a joint event with Gearing Roles, a sister project with the objective of challenging and transforming gender roles and identities linked to professional careers.

Teagasc developed its core gender and diversity values using a participatory learning and action approach to brainstorm ideas on the meaning of gender equality in Teagasc.  To ensure that all voices were heard and reflected, internal workshops with staff were held across the organisation. 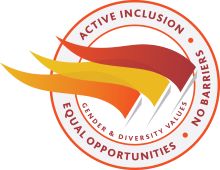 Teagasc's core gender and diversity values, which were identified as being integral to the organisation, emerged as follows:

The development of a suitable logo was very important in communicating our core gender and diversity values, both internally within Teagasc and outside the organisation.  The final logo, which will now be included on all corporate documents, is proudly displayed to the right.

The members of the core Teagasc GenderSMART project team are:

A GenderSMART Taskforce was established in Teagasc to oversee the development, implementation and monitoring of the Gender Equality Plan (GEP).

The other members of the Teagasc GenderSMART Taskforce are: