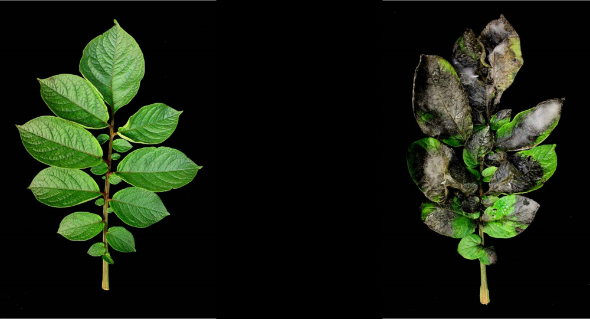 Late blight disease caused by the pathogen Phytophthora infestans led to the Irish potato famine in 1840s and remains the most destructive pathogen of potato to date. The disease is estimated to result in major potato crop losses under favourable environmental conditions. As a consequence, the current over-reliance on chemicals as control measures presents significant environmental and financial cost to potato production. An adaptive pathogen, P. infestans utilises modifications in specific ‘effector proteins’ to avoid detection by host resistance genes and to sustain its virulence. In response, the proposed project will employ novel enrichment sequencing technologies (PenSeq, RenSeq) to characterize the effector profiles of Irish P. infestans populations and the cognate resistance repertoire in potato cultivars. This will provide a unique insight into the adaptation mechanism of P. infestans, which in turn will support the identification of durable host resistance genes and hence inform their deployment strategies. The outcomes of the study will inform the Teagasc potato breeding programme as to the most relevant strategies to adopt in breeding novel varieties with enhanced disease resistance.