One step ahead: finding alternative ways to treat bovine mastitis 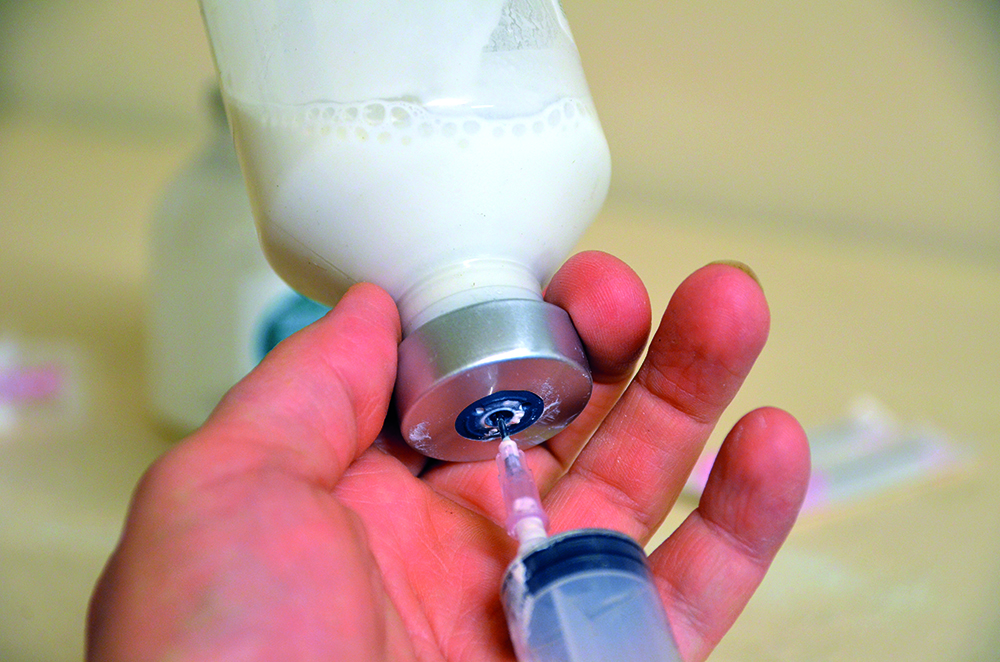 Growing pathogen resistance to antibiotics has led researchers to explore the use of probiotic and postbiotic formulations in treating mastitis in dairy cattle.

Mastitis – the infection and inflammation of the udder – is the most prevalent and economically significant disease in dairy cattle. Farms with cattle suffering from this disease are impacted by depleted milk production, discarded milk, premature culling and treatment costs.

The causative agents of mastitis are usually bacterial pathogens (disease-causing bacteria) such as Staphylococcus aureus, Streptococcus uberis, Streptococcus dysgalactiae and Escherichia coli. As a result, cows suffering from mastitis typically have a high somatic cell count (SCC) in their milk.

Currently, the treatment options for bovine mastitis involve antibiotics. However, pathogens often develop resistance to antibiotics, which frequently results in treatment failure. In light of this, researchers at Teagasc and APC Microbiome Ireland have been investigating alternative ways to treat bovine mastitis.

One alternative option to treat bovine mastitis is to use beneficial bacteria (some of which are classed as probiotics) to kill mastitis-causing bacteria. Previous field trials showed that bacteria such as Lactococcus lactis DPC3147 can produce antimicrobial peptides called bacteriocins, which kill mastitis-causing pathogens.

As a result, this bacterial strain was used in two further field trials to develop alternative therapeutic options to antibiotics. The researchers then tested these new therapeutics to see if they performed better, worse than or on par with antibiotics used for treating bovine mastitis.

Harsh Mathur, Research Officer, Teagasc, is one of the researchers who conducted the field trials. He says: “In the first of these trials, we developed a mineral oil-based emulsion formulation that included live cells of L. lactis DPC3147, and tested the formulation’s effectiveness directly against antibiotics.”

The medicines were injected into different udders affected by mastitis, and then the results were compared.

“We found that the oil-based formulation stimulated the cow’s natural immune response to fight off the infection and performed just as well as antibiotics in curing mastitis,” says Harsh. “Its cure rate was equivalent to antibiotics, and it was just as effective at reducing SCC within one week of infusion.”

The results from the first field trial prompted the researchers to further develop the oil-based formulation, in order to understand how it works in stimulating the cow’s immune response.

“In our second field trial, we aimed to find out if these probiotic cells had to be alive or if heat-killed cells (known as postbiotics) of the strain were capable of stimulating the cow’s immune response to clear the infection,” says Harsh.

“We developed an identical formulation to the above, but with heat-killed L. lactis DPC3147 cells. Both formulations performed equally well in stimulating the cow’s immune response to fight off and clear the infection.”

The fact that the heat-killed cells performed on par with the live cells was encouraging, as it counteracts the need for preparing formulations containing freshly growing live probiotic cells.

Catherine Stanton, Senior Principal Research Officer at Teagasc and project team member, says: “By including heat-killed cells of the L. lactis DPC3147 strain in oil-based formulations, we have circumvented issues relating to the shelf-life of these products. This will potentially give farmers additional options when it comes to storing these formulations, ready to use when required.”

The researchers are currently preparing for future field trials where they hope to understand the mechanisms of the oil-based formulations.

“We hope that by gathering more information on these alternative formulations, we will give farmers confidence to view them as realistic options to antibiotics when treating bovine mastitis in the herd,” concludes Catherine.

One study estimated that mastitis results in a farm profit decrease of €19,504 for the average 40-hectare farm.

We would like to thank Colin Hill (APC Microbiome Ireland) and Jim Flynn (Teagasc) for their contribution to this research.

This work was funded by the Science Foundation of Ireland (SFI) Centre for Science, Engineering and Technology (APC grant number SFI/12/RC/2273_P2) and VistaMilk Work Package TP9.