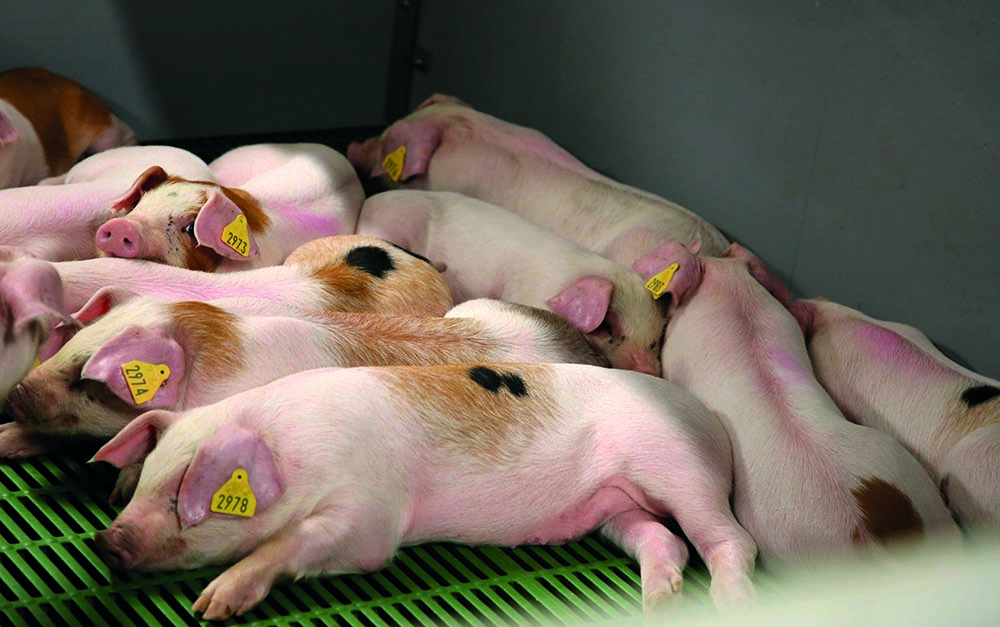 Piglets suffer stress with any manipulation, so studying their development requires non-invasive methods

Piglets are born completely dependent on the sow, but they develop very fast into independent and resilient animals. This transition is accelerated in commercial farms – it happens in just four weeks!

Accelerating a process like this involves specialised management, supplementary food that is often the same quality as baby formula and, sometimes, veterinary support through the use of antibiotics. Having a good understanding of what takes place during these four weeks is key to improving the health and welfare of piglets, and to maximising their growth without the need for veterinary support.

Milk plays a main role in this context because it is the only food that the piglet will have during this time. It is not only a source of nutrients for the piglet, but a way the sow passes all the relevant information that the piglet needs to face the challenges that are coming, e.g. pathogen exposure and organ development.

Edgar García Manzanilla, Head of Pig Development Department at Teagasc, says: “Understanding the information contained in the milk of the sow would allow us to understand the development of the piglet. This could then be optimised in commercial conditions.”

Studying this development is challenging, however, because piglets suffer stress with any manipulation. Stress changes the physiology of the animal very quickly, and many of the parameters change in seconds.

“A piglet that is handled for one minute for blood sampling may be so stressed that the CO2 in its blood reaches levels that would kill a person,” explains Edgar. “That is why using samples that are not invasive – like milk, faeces or saliva – is a more desirable alternative.”

The magic of colostrum

Colostrum is the first milk that piglets, like most mammals, receive when they are born. Mammals produce colostrum immediately following the delivery of a newborn, and it lasts between 24 and 48 hours after birth.

The Milkobiome researchers have carried out a first analysis of sow colostrum composition in detail, and found a more radical and controlled change from colostrum to milk than expected.

“We already knew that colostrum is much richer than milk in antibodies,” says Edgar, “as the piglet needs it for immune protection. However, what we also found was a surprisingly higher content of the protein lactoferrin, long chain omega-3 fatty acids and rare oligosaccharides (a special type of carbohydrate). All of these have profound modulatory effects on the immune system and functions that are still to be discovered.”

Going with the gut

The researchers have also conducted a first analysis of bacterial populations in piglets, which revealed interesting new information on the composition of the gut microbiome of the animal.

Until now, most of the research on pig microbiome has used a technique called 16S analysis. The Milkobiome project is using a more effective approach – next-generation sequencing. This technology identifies the bacterial species in more detail and allows the researchers to understand the metabolic functions of bacterial populations.

Initial results have shown that the big homogeneous population of lactobacilli previously described with 16S is in fact a group of very diverse species of bacteria with a wide range of metabolic functions. This finding opens new opportunities to optimise piglet health.

The story saliva tells us about pig health

The use of saliva to understand the physiology of animals is not new. However, the extent to which it has been used in this project is unprecedented.

“Saliva was underestimated in the past as a fluid for veterinary use, but now researchers know how much valuable information can be obtained from this fluid,” says Edgar. “All it takes to collect saliva is a piece of sponge or a rope that the piglets chew for a few minutes.”

The project team has collected saliva from piglets and sows at different stages before and after birth, and analysed 25 biomarkers for inflammation, specific immunity and oxidative status, among others.

The findings found from these non-invasive studies are promising, and help our researchers to build a clearer picture of how milk and microbiota affect future intestinal health in pigs.

The Milkobiome project has received funding from the Research Leaders 2025 programme, (co-funded by Teagasc and the European Union’s Horizon 2020 Research and Innovation Programme) under the Marie Skłodowska-Curie grant agreement number 754380.

The work on saliva and microbiome is funded by the BM-Farm project (International Co-ordination of Research on Infectious Animal Diseases).