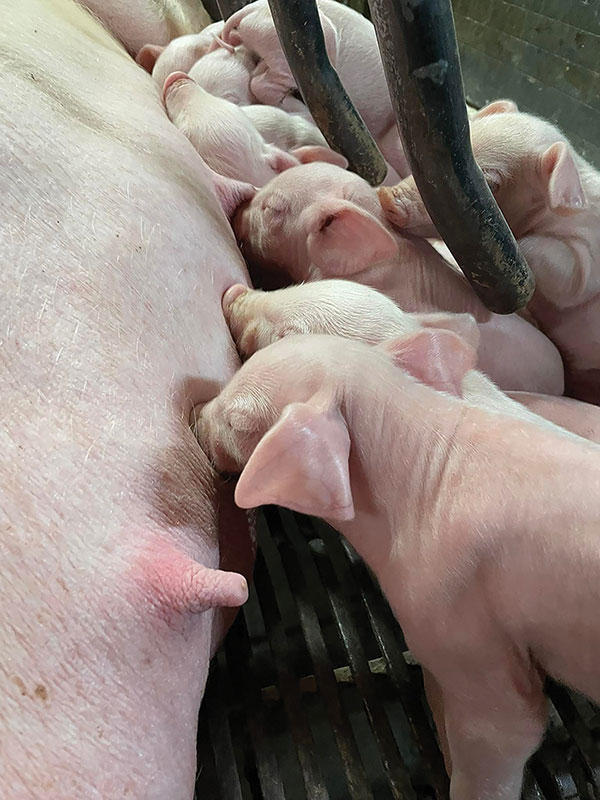 Long-term (chronic) stress negatively impacts the health and welfare of pregnant sows. This can lead
to poor sow performance, such as a reduced number of piglets produced.

Chronic stress during pregnancy can also negatively impact the development of piglets as they grow in utero. This can have life-long effects on the piglets, including reduced birth weights, and changes in their behaviour, ability to learn and the way they cope during stressful situations.

It can also impact their ability to fight diseases. Reduced immunity results in poor welfare and performance, especially when the piglets are separated from their mother during weaning – one of the most stressful events in a piglet’s life. Weaning stress makes piglets vulnerable to diseases, which require treatment with antibiotics. However, overuse and misuse of antibiotics contribute to the current growing threat of antimicrobial resistance to both humans and animals.

Reducing chronic stress experienced by pregnant mothers could play a crucial role in ensuring good piglet health, resilience and welfare, and could help combat antimicrobial resistance. To date, aspects of sow housing and management that contribute to chronic stress remain under-investigated, so researchers at Teagasc conducted a study to explore this area in more detail.

Two factors in sow housing with the potential to reduce chronic stress are: the improvement of physical comfort whilst lying, and satisfying motivations to explore and forage.

As part of this study, our researchers improved pens for housing pregnant sows on commercial farms by providing rubber lying mats (to improve physical comfort) and straw and natural fibre ropes (to satisfy sows’ exploratory needs). They then evaluated the effects these improvements had on chronic stress and the welfare of sows, as well as the health and welfare of their piglets.

Gestation in sows lasts 3.75 months. For the study, one month into this gestation period, 120 sows were assigned to either conventional (control) or improved pens.

All pens had full length feeding stalls and a fully slatted floor. The conventional pens were typical of gestating sow housing in Ireland; they were equipped with two blocks of wood and two chains suspended within the group area as enrichment. The improved pens also had this, as well as rubber mats, a length of manila rope in each feeding stall and straw provided in three racks: one in the middle and one at each end of the pen.

Sow locomotory ability (their capability to move independently from place to place) was assessed using a visual analogue scale at different stages of pregnancy: one month into gestation (at the start of the study), around day 57 (the middle of the gestation) and at the end (one week before birth).

The behaviour of the sows was observed at similar times. The first category of behaviour was oral stereotypical behaviours – repetitive, invariant behaviours, indicative of a lack of satiety. Examples include sham chewing, mouth stretching, palate grinding, sucking and tongue flicking. Aggressive behaviours were also recorded.

Right and left eye tear staining – a chronic stress indicator – were scored a week before farrowing (the process of birthing a litter of pigs). The number of piglets born alive, dead and mummified were also counted at farrowing, and throughout lactation the amount of diarrhoea in the farrowing crate was scored approximately every second day, as an indication of piglet health.

Effects on sows and their piglets

Sows housed in the improved pens had better locomotion scores in mid- and late pregnancy than sows housed in the conventional pens, reflecting the beneficial effect of the rubber mats on their leg health and reduced lameness. They also had a better right and left eye tear stain score, which indicated they were less stressed.

These findings were supported by the fact that sows in the improved pens performed fewer oral stereotypes in mid- and late pregnancy than those in the conventional pens. In fact, they tended to perform fewer stereotypical behaviours just 72 hours after entry into the improved pens. This confirms previous findings on the beneficial impact of straw on oral stereotypical behaviours in sows.

Levels of aggressive behaviour were lower in improved pens than in conventional ones upon entry to the pen, likely related to the initial novelty of the enrichment, which acted as a distraction and ameliorated aggression. Interestingly, however, levels of aggression in improved pens were higher than conventional pens in late pregnancy. This occurred in the loose area of the pens, indicating it was likely due to competition for access to straw enrichment devices.

High maternal stress levels during early to mid-pregnancy are associated with piglet losses. Any piglet that dies after the formation of its skeleton (anytime between day 38 and 45) is not reabsorbed by the sow’s body, and persists as a mummy.

As expected, sows in the improved pens – whose stress levels were believed to be lower – had fewer piglets mummified than those in the conventional pens. In addition, the fact that fewer piglets were born dead from the improved pen sows indicates a smoother farrowing process, a possible consequence of lower chronic stress levels in late pregnancy.

Diarrhoea scores were also lower for piglets born to sows from improved pens. 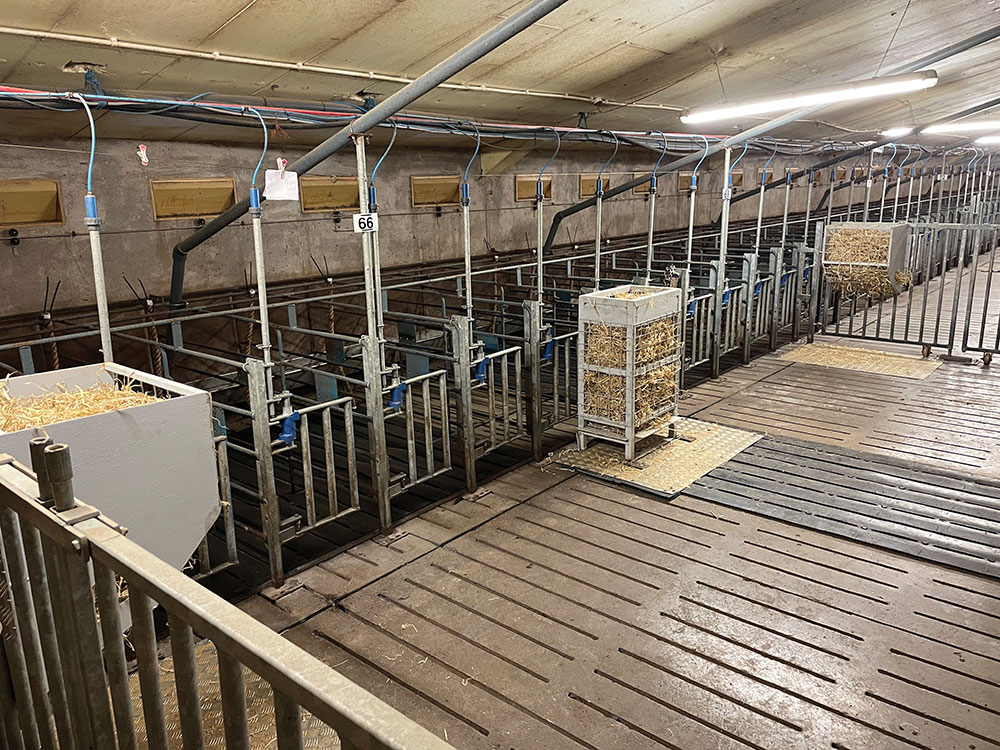 Highlighting the link between housing and welfare

Our researchers’ study confirms that good welfare acts like a preventative medicine for health conditions in both sows and their offspring, and offers additional benefits to sow reproductive performance. The improvements implemented to pen design are easy to install on typical commercial farms in Ireland, and as such are easily transferrable to commercial situations.

These findings are crucial in improving the sustainability of pig production and in addressing the grand global challenges of antimicrobial resistance, and offer important information on an area in which previously little was known. 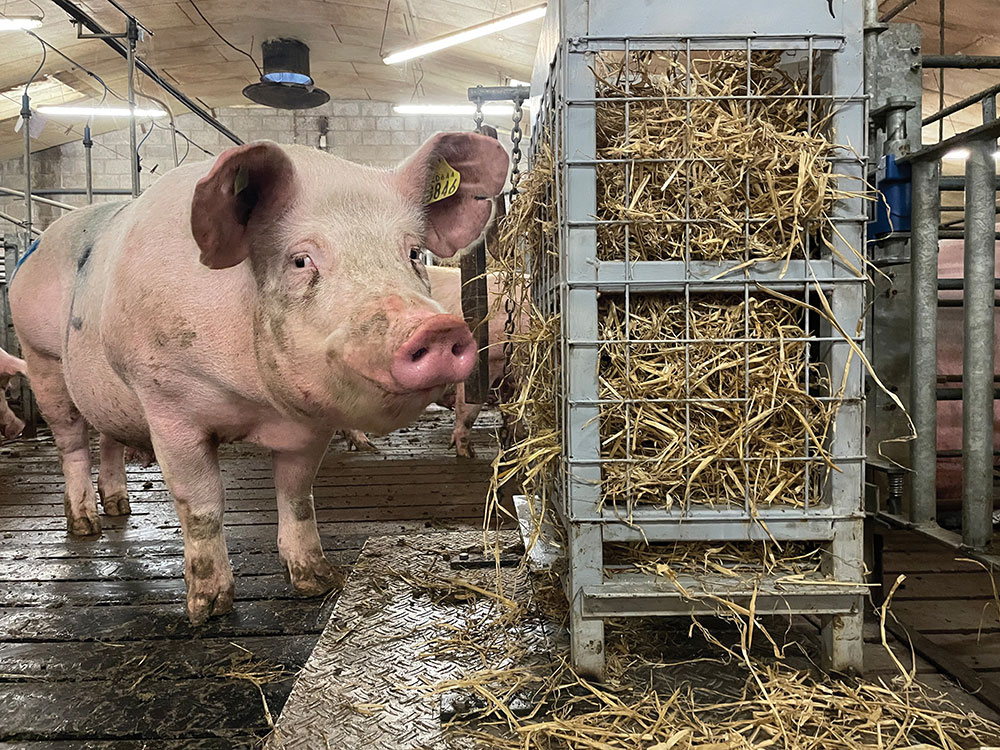 We’d like to acknowledge Joanna Marchewka (IGAB PAS), who supervised this work.

We’d also like to thank the farm owner and staff at the Ballylough Piggeries for facilitating our work.

This study was funded by the Teagasc Walsh Scholarship (SowWeanWel 0370).