You are what you eat

The statement ‘You are what you eat’ is well-known in food science. It refers directly to the bioactive compounds that we ingest when we eat healthy foods, and how much of them our bodies absorb.

Bioactive compounds are substances that have a biological activity, such as omega-3 fatty acids and flavonoids (found in fruit and vegetables).

They are important, as they have essential functions for maintaining human health. For example, omega-3 fatty acids help to reduce the risk of coronary disease and is a precursor of anti-inflammatory mediators. Quercetin – one of the most abundant flavonoids – has several health benefits, such as antioxidant, anti-inflammatory and anti-obesity properties.

However, the absorption of these compounds by the organism in which it has entered into depends on many factors, including its physical and chemical characteristics and the structure of food, often referred to as the food matrix. In addition, most bioactive compounds have limited accessibility to the organism, making their ingestion more challenging.

In collaboration with Germany’s Technical University of Berlin (TUB) and microencapsulation experts EncapProcess, France, Teagasc researchers are investigating how to improve the bioaccessibility and bioavailability of omega-3 fatty acids when ingested as a small capsule, using a combination of plant proteins and polysaccharides (the most abundant carbohydrate found in food) as the delivery material.

The benefits of pea protein

Encapsulation is a coating technique in which biopolymers surround bioactive compounds to protect them against external factors such as oxygen, light and moisture, and promote their controlled release when ingested. This method (known as complex coacervation) consists of forming a delivery structure (microcapsule) through the electrostatic interaction of two biopolymers.

Talita Comunian, Marie Skłodowska-Curie Fellow, Research Leaders 2025 Fellow and project lead, says: “Previously, the main biopolymers used as carrier materials for complex coacervation were animal and dairy proteins and polysaccharides. In recent years, however, many of these proteins have been replaced due to dietary restrictions, food allergies and consumers’ preferences.

“Pea protein is considered a promising plant protein alternative, due to its low cost, wide availability and excellent amino acid profile. Gum arabic – a natural tree gum and polysaccharide – is also widely used by the food industry as an encapsulating material, as it has low cost, broad availability and good emulsifier properties.” 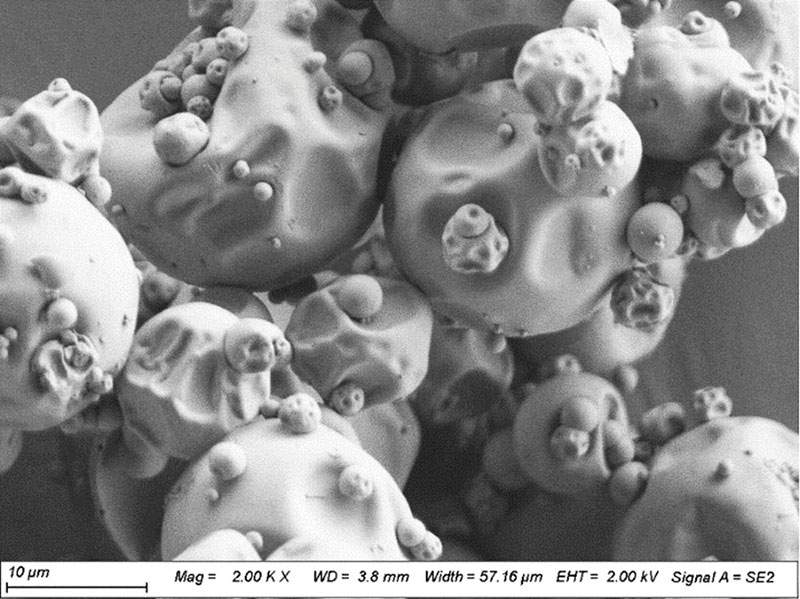 The best conditions for creating microcapsules

The complex coacervation process is carried out in an aqueous solution, therefore a drying step is necessary for feasible handling and food application of the microcapsules. There are many drying techniques, but spray-drying is the most widely used method in the food industry, due to its low cost and simplicity. Spray-drying consists of the atomisation of the sample using hot air at a specific temperature and pressure.

Electrospraying is also a promising technique for encapsulation; it is similar to spray-drying but doesn’t require a high temperature, and the drying is performed with the application of voltage.

As part of her research, Talita analysed the best conditions for forming the microcapsules.

“The microcapsules were dried by both spray- and electrospray-drying,” she says, “with the help of colleagues at the University of Nantes and spray nozzle technology experts Fluid Air, respectively.

“The results were interesting. The different drying methods promoted the formation of different particles and, consequently, different behaviour for the protection and release of encapsulated compounds.”

Besides the use of plant proteins for the protection of bioactive compounds, an innovation of this project is the investigation of controlled release during in vitro gastro-intestinal digestion. Since microcapsules obtained by complex coacervation are stable at low pHs, the researchers expect the compounds to be released and digested mainly during the intestinal phase.

“What this study shows is that pea protein could be a viable alternative to animal and dairy proteins as a carrier material for complex coacervation,” says Talita. “Furthermore, this is the first step towards developing a structured delivery system with pea protein and gum arabic, for the encapsulation of bioactive compounds, with a controlled release of omega-3 fatty acids and quercetin.”

Sources of bioactive compounds that help to maintain health:

We would like to thank Laura Gómez-Mascaraque (Teagasc), Audrey Maudhuit (Fluid Air) and Guillaume Roelens (University of Nantes) for their collaboration on this project.

This project is funded by the Research Leaders 2025 Fellowship programme (co-funded by Teagasc and the European Union’s Horizon 2020 Research and Innovation Programme), under the Marie Skłodowska-Curie grant agreement number 754380. André Brodkorb is a funded investigator by Science Foundation Ireland (SFI) and the Department of Agriculture, Food and Marine on behalf of the Government of Ireland, under grant number (Vistamilk 16/ RC/ 3835).

Department of Food Chemistry and Technology

Department of Food Chemistry and Technology