Martin Davin farms at Eglish near Rathdowney in Co Laois. Joining the panel of farmers in the Teagasc Glanbia Monitor Farm Programme in 2015 helped him to focus his priorities and since then he has expanded his farm based on a solid plan.

There is a big emphasis on milk quality on the farm. Martin’s partner, Lena Sheahan, is a vet and actively helps on the farm during the busy calving period.  Martin and Lena also work with Glanbia’s vet Shane McElroy on herd health planning and vaccination Programmes, using an online facility which sends text reminders to him in advance of vaccinations.

Prior to 2017, cows on the Davin farm were blanket dried off using antibiotics and teat sealant.  Figure 1 below shows the bulk milk Somatic Cell Count (SCC) levels on the farm since 2011.

We started reducing our use of dry cow tubes four years ago.  In the first two years we were very careful about the cows we chose to try it on. For the last two years half of the herd was dried off without antibiotics.  We don’t have a number in our head.  The decision is based on the milk recording results and cows with a SCC of less than 100,000 are picked out to get a teat sealant only.

You’ve got to be a lot more careful when drying odd without antibiotics.  It’s like surgery.  Before we start we’ll have clipped tails and trimmed udders a couple of days in advance.  We do a maximum of two rows a day (24 cows).  You need plenty of help.  We use surgical spirits to thoroughly clean the udder, someone to restrain the cow, one person with clean gloves administering the teat sealant and another to record and pass the tubes to me.  At the start of the drying off season we put freshly dried off cows in a paddock away from the parlour. Later on the cows are dried off and go directly into the cubicle shed.  The beds are limed twice a day for a week until cows are fully dried. 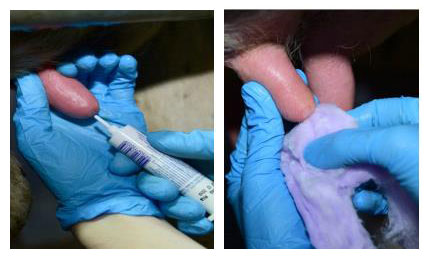