Producer Eugene Sheehan from Ireland has reduced pig production costs per kg slaughter weight by 9.3% and lowered antibiotic use by 90%, having been the first to use a new biosecurity scoring tool, Biocheck.UGent®. This tool helps farmers review their unit management as it scores different aspects of biosecurity and allows farmers to identify areas of weakness to address.

Eugene’s 300-sow farrow-to-finish unit was positive for PRRS, APP, Mycoplasma and influenza and previously had other problems, including diarrhoea, respiratory disease and meningitis. Teagasc adopted the University of Ghent Biosecurity Scoring Tool as part of its Advisory Services package to enable farmers to review biosecurity and improve performance on their farms.

Eugene has implemented a series of management and biosecurity practices that have helped improve pig health and performance and reduce costs. Improvements enabled:

Review and identification of problems on farms is important prior to taking action. Veterinarians, advisors and nutritionists, along with the farmer, were involved in the discussions to find the most cost-effective way of addressing issues on farm. As a result of these discussions, changes to Eugene’s farm included:

A key change was to build extra accommodation to have the right proportions between the different production stages and allow pigs the right space. Thus, the ‘all-in-all-out’ system is undertaken correctly and re-mixing of pigs is now avoided. Although this change required an initial investment, it paid off very quickly –seen in the 9.3% decrease in production costs per kg slaughter weight. It took almost two years and lots of hard work to see the benefits of all the changes but running the farm is now easier and more profitable. 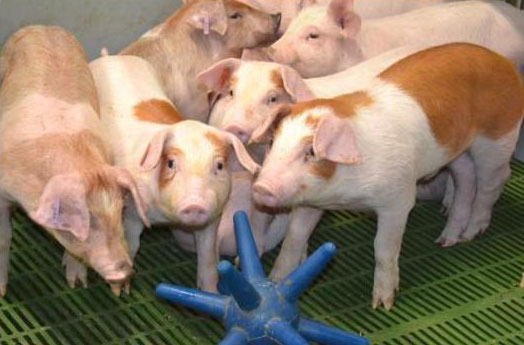