The Teagasc Derrypatrick Herd is a 100 suckler cow to beef research demonstration herd located in Grange, Dunsany, Co. Meath. It is on 65ha with a stocking rate of 2.7LU/ha. The primary objective of this herd is to evaluate alternative suckler calf-to-beef production systems. The cow herd consists of Limousin × Friesian and ¾ beef breed Simmental and Limousin sired animals. From 2013 to 2016 these cows were bred to either Angus (early-maturing; EM) or Limousin/Charolais (late-maturing; LM) bulls. Progeny have been finished as 16-month bulls, 20-month heifers and 24-month steers. 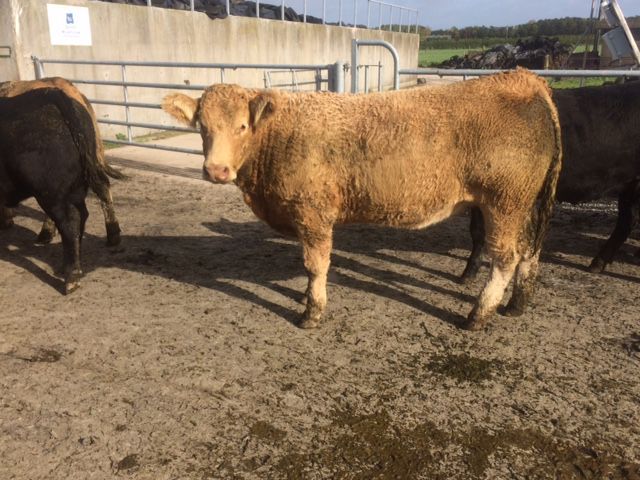 As of 2018, to coincide with a grazing study, all male progeny will be slaughtered as steers. There will be a higher stocking rate (3 LU/ha). Data collection for the grazing and breeding research projects will commence in 2018. Read more about this research

In 2017, turnout of yearlings and cows with calves at least 10 days old occurred on March 10th, due to good weather conditions. Urea was spread at 28 kg N/ha (23 units/acre) across 70% and slurry (2,500 gallons/ac) on 30% of the farm at the end of January. A combination of a high closing farm cover in the autumn of 2016 and a good response to early fertiliser/slurry application in spring resulted in a high opening average farm cover of 1,200 kg DM/ha. In an attempt to achieve our spring-rotation target of 100% of the farm grazed by the 3rd week in April, lighter covers were grazed first followed by strip-grazing heavier covers. However, due to poor ground conditions, and the high opening pasture cover, the first rotation was not completed until early May. 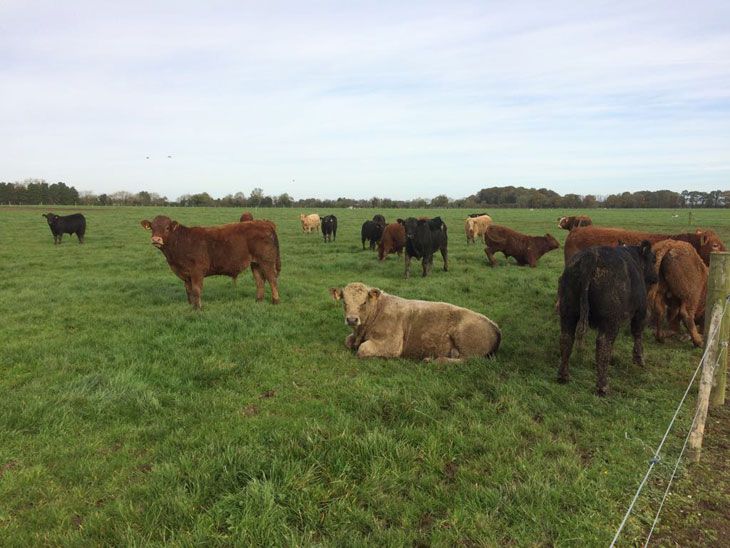 Thirty-four hectares (52% of the farm) were closed for silage at the end of the 1st week in April. Despite initial good weather and early turnout, high levels of rainfall in late March resulted in very difficult grazing conditions. It was not possible to graze 16ha of silage ground. First-cut silage was harvested at the end of May in excellent conditions and yielded 6.5t DM/ha at 72% DMD and 30% DM. Twenty hectares was harvested for second-cut silage on July 17th and yielded 5t DM/ha at 69% DMD and 20% DM.

Reseeding was carried out on 2.5ha (6.5 acres) in 2017. Round-up was applied on June 22nd and silage bales removed on July 5th. Fertiliser (3 bags 10:10:20/ac), granulated lime (1.5 bags/ac) and slug pellets (2kg/ac) were applied ahead of sowing. The late-maturing tetraploid variety Abergain was sown (14kg/ac) using an Erth agri-seeder. Herbicide was applied on August 14th to kill weeds, mainly chickweed, docks and thistles. Grazing of this reseed took place on August 21st and was grazed 3 times before closing for the winter period.

The closing of paddocks in autumn began on October 10th. Paddocks were grazed quicker than expected resulting in 70% of the farm grazed by the end of the first week of November, 10% more than the 60% target. Being mindful of the situation encountered in spring 2017 (high opening farm cover), 10% of the farm was re-grazed. Subsequently, the closing farm cover was on target at 550 kgDM/ha. Hopefully, with these closing covers and earlier turn out next spring, we will be better able to fully graze our pastures, even in poorer ground conditions.

In 2018, we aim to improve the spring grassland management. The first step to do so has been to close paddocks in early October near the farmyard to facilitate earlier turn-out.

A summary of calving performance 2017 is presented in Table 1.

Calving was spread over a 13-week period due to one early calf born at the end of January, 11 days before the next calf. In total, 105 cows calved-down producing 106 calves. Unfortunately, there were 5 calves dead at birth (4.7% mortality) with one other calf being put-down due to a deformity. Following laboratory analysis, there was no causative effect identified for these deaths or the deformed calf. According to ICBF national data, the percentage of calves dead at birth in the Derrypatrick Herd is similar to the national average whereas, the dead at birth figure for the top 15% of herds is 2.2%. As a result of regular cleaning and disinfecting of calving pens there were no further calf mortalities. Of the 105 calvings, there were 3 caesarean sections, all of which were a success. In total, 24 calvings occurred after April 1st. Cow live-weight and BCS at calving were on average, 627kg and 2.75, respectively.

Targeted improvements for calving in 2018 include a reduction in the number dead at birth and fewer calvings after April 1st.

Table 2 gives a summary of the sires used and a summary of the breeding performance is presented in Table 3. A 12-week breeding season commenced on May 1st and finished July 24th. The cow herd grazed in 4 groups while replacement heifers grazed in a group of their own. A teaser bull accompanied each group. All breeding was carried out using A.I. only and the AM:PM rule was applied. Cows were bred to 1 of 12 (4 from each breed) Charolais, Limousin and Simmental sires, whereas heifers were bred to 1 of 4 Angus sires. In 2017, all heifers were inseminated in the 1st 8 weeks of breeding season and only 3 heifers were bred after the first 6 weeks. Aids to heat detection included teaser bulls with chin-ball, tail paint and visual observations (3 times daily).

Table 4 summarises calf performance. All male calves were castrated in mid-September. Gradual weaning began on October 10th and was carried out by housing a third of the cows from each grazing group every 3 days. Hence, weaning was completed over a 10 day period. This weaning method has been a success for the Derrypatrick Herd over the last number of years. On average, cows weaned 43% of their body-weight in calf-weight. Due to poor weather conditions, cows remained housed following weaning. Calves were offered 1 kg/head/day of a barley-based concentrate ration from 10 days prior to weaning until housing, 4 weeks after weaning. Unfortunately, a weanling heifer had to be put-down under veterinary advice following a fracture of the leg, the only mortality encountered following calving. Cow live-weight and BCS at weaning were on average 668kg and 3.0, respectively. 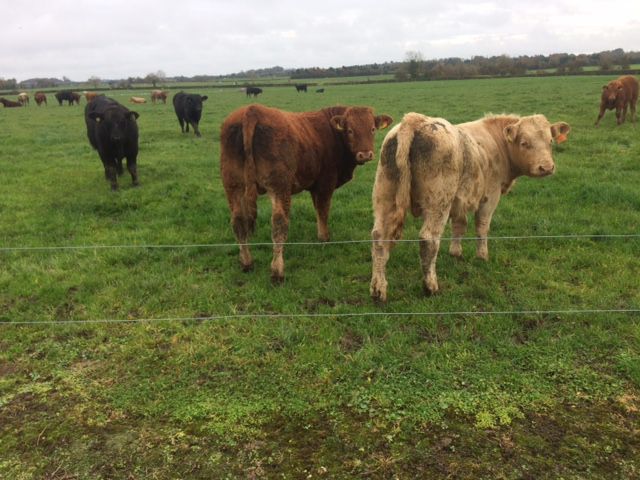 All calves were dung sampled July 24th with results indicating a low worm burden. Dung samples were taken again on August 21st revealing a work count (~200 eggs per gram) that required worm control. All calves received a Levamisole based treatment and a subsequent dung sample revealed a large reduction in worm burden. This was the only worm control calves received until housing. Shortly after housing, all calves received triclabendazole and ivermectin based products for fluke and worm control, respectively. Weanlings were housed on November 16th in dry conditions. The following Wednesday, 36mm of rain fell so we were quite happy we opted to house. An independent evaluator valued the weanlings at housing. According to this evaluation, weanlings were worth €725 and €781 for heifers and steers, respectively.

A summary of slaughter performance is presented in Table 5. Having implemented the Teagasc 16 month bull beef system, all bulls were offered a barley-based concentrate ration (2 kg/head/d) from weaning. When housed (Nov 11th 2016), bulls were offered 1st cut silage (72% DMD) ad-lib plus 2 kg/head/d of concentrate. Concentrate was gradually increased with all bulls receiving ad-lib by the 1st week in January. Bulls were slaughtered in mid-June 2017 at 16 months of age achieving a lifetime ADG of 1.35 kg with an overall concentrate input of ~1.3t/head. Finishing heifers and steers were offered a barley-based concentrate from September 1st that gradually increased to 4kg/head/day over a 2-week period. The aim was to finish all heifers from grass at 20 months and steers before the second winter. In total, 16 heifers and 12 steers were slaughtered following supplementation at grass. 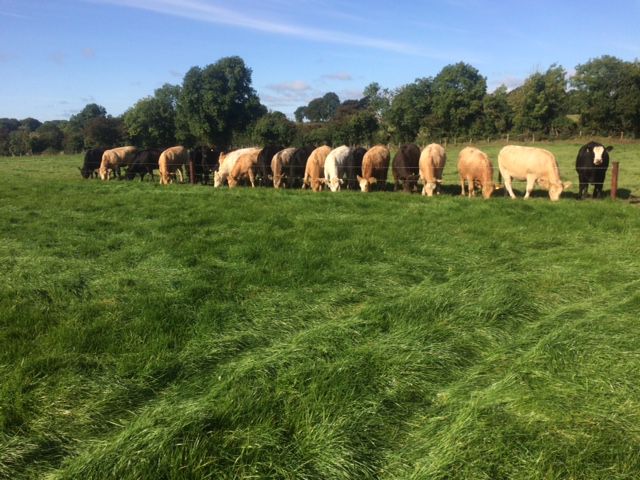 Due to poor weather conditions, animals (17 heifers and 8 steers) were housed on November 1st for a final finishing period. Some animals were drafted for slaughter on November 16th whereas the remaining animals were slaughtered on December 7th with only a 5-week indoor period required. Steers achieved the targets required for a 24-month steer system, but did so 3 to 4 months early. In 2017, a total of 28 cows were culled with chronic lameness and poor performance being the main factors for culling. Arguably the best cow in the herd was culled due to chronic lameness; first calving at 23 months, this 9 year old cow produced 7 calves resulting in 2,600kg of beef with an average calving interval of 365 days. At slaughter this Limousin (Rocky sired) cow weighed 860kg and left a 467kg U-4- carcass.

The Derrypatrick Herd gross margin for 2017 is €1285/ha compared to the 2016 gross margin of €1054/ha. Despite purchasing 18 in-calf cows (to replace 18 cows not in-calf in 2016), gross output was higher in 2017 than 2016 aided by a positive inventory change (cow numbers). In comparison to 2016, fertiliser costs were €65/ha greater and purchased feed costs were €146/ha lower, resulting in overall direct costs being €59/ha lower in 2017. Increased fertiliser costs were due to investment in soil fertility by using more compound fertiliser. Lower feed costs were due to shorter finishing periods for cull cows, heifers and steers.

Replication and improvement of the animal and economic performance outlined above is a key target for 2018.

White clover (Chieftain and Aberherald) was incorporated into half the farm (every second paddock) during 2017. The aim was to evaluate the effect of incorporating white clover into perennial ryegrass swards on herbage production, utilisation, clover persistency and animal performance of a suckler to beef system. Clover was over-sown into existing pastures at a rate of 5kg/ha (2kg/ac) after a tight grazing or silage harvest using an Einbock pneumatic seeder. Fertiliser (0:7:30) was spread at sowing at a rate of 5 bags/ha (2 bags/ac). To aid clover establishment, pre-grazing herbage yields were typically less than 1,300 kgDM/ha for the next 3-4 grazings. Half of the cow herd and their progeny will graze perennial ryegrass only swards while the remaining animals will graze mixed swards consisting of white clover and perennial ryegrass. 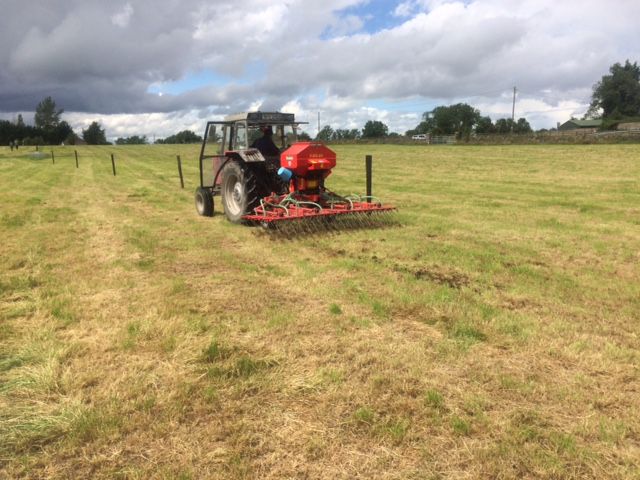 Breeding 2017 was the 1st year of the High Replacement Index vs. High Terminal Index sire comparison. A team of sires, across breed, are being selected on high maternal traits and high terminal traits for the duration of this comparison. The calves from these sires will be managed to slaughter in a 20-month heifer or 24-month steer production system. The aim of this study is to determine the effect of selecting high replacement sires in comparison to high terminal sires on animal performance and carcass output.
Within the replacement index, sires were selected on the following traits:

Within the terminal index, sires were selected on the following traits:

Maximum sire calving difficulty used on the cow herd was 8%. All heifers were bred to Angus sires using high maternal and high terminal bulls with the same criteria as mentioned above.

Paddocks and animals involved in this research programme will be on display at the Teagasc Beef Open Day June 26th 2018.