Targets for weanlings at 200 days of age

James received his Sustainability Report for 2021 which was compiled by the National Farm Survey on behalf of the Signpost Programme.

The National Farm Survey has been conducted on an annual basis since 1972. The survey is operated as part of the Farm Accountancy Data Network of the EU and fulfils Ireland’s statutory obligation to provide data on farm output, costs and income to the European Commission. A random, nationally representative sample, of between 1,000 and 1,200 farms depending on the year, is selected annually in conjunction with the Central Statistics Office (CSO). Each farm is assigned a weighting factor so that the results of the survey are representative of the national population of farms.

From the information gathered from the participating farms farm specific figures can be generated for a variety of sustainability metrics which are specific to each farm.

Two figures which are particularly relevant for James’s farm are the Nitrogen Use Efficiency figure and the nitrogen balance figure.

The Nitrogen Use Efficiency (NUE) is the quantity of nutrient recovered by a crop relative to the nutrients supplied from soil, applied fertilisers, manures and ultimately how much is recovered in the end product that is sold in terms of milk, meat or crops. Efficient use of nitrogen is essential to achieving maximum grass/crop growth and achieving a greater return on each kg of fertiliser you invest in. Planning helps to optimise the use of farm nutrients, maintain and improve soil health, reduce excessive nutrient build up and lessen environmental losses.

James’s figure is 12.9% and the target is 35% so there is huge scope for improvement on the farm. As the farm is still in the development stages this is expected to improve over time. Achieving this will indicate improved sustainability of our farming systems in three ways:

James is taking the following steps on his farm to help improve his NUE:

In the coming years as soil fertility improves on the farm, James may consider incorporating white clover into his grazing paddocks to increase animal performance and to reduce chemical nitrogen requirements on the farm.

The other figure which is linked to NUE is the Nitrogen balance or surplus. This is calculated by subtracting the total nitrogen outputs (kg beef) from the total nitrogen inputs into the farm (ration, fertiliser). The figure for James’s farm is 121 kg N/ha and the national average of the NFS was 61.9 kg N/ha. A higher nitrogen balance indicates higher potential of leaching. This can be improved in line with NUE by less nitrogen coming into the farm (improving soil fertility, more effective feeds and fertiliser) and more nitrogen out (in the form of beef through more efficient cattle). Nitrogen leaching can be reduced by good timing of fertiliser applications, good grazing practices and using protected urea instead of CAN which James is also doing.

James updated his cost control planner from January to April 2022. So far his fertiliser purchases are over 400% this year since 2021. This is as a result of higher fertiliser prices and a higher demand for compound fertiliser from soil sample result recommendations. The ration bill is expected to be higher than 2021 due to higher feed costs. The contractor bill is 65% higher than 2021. James has decided to postpone reseeding 2 fields from this year to spring 2023 which will reduce his costs for this year. As a result of higher input costs James is expecting that his costs will exceed the 2021 figures and this leads him to making a winter sales plan.

As the farm is still in the development stage, it is difficult to balance cash flow and making a profit as there is a lot of investment in a paddock system on the out farm, handling facilities and building soil fertility.

Typically James would sell his yearling bullocks and buy back in weanlings. However as it is difficult to predict autumn store and weanling prices he will hold off making a decision on this until October/November. In the meantime the target is for James to break even on the cattle enterprise and retain all of his direct payments for the year. The most saleable cattle are the forward store LMX bullocks on the out farm, of which there are 14 cattle over 470kg (average weight of 503kg on 6th August) which are suitable for sale. According to national mart prices, these cattle have been making an average price of €2.61/kg for the last 3 weeks. Grass growth on the out farm declines sharply from mid-August so James could balance growth and demand by selling some of these over the coming weeks. It may be an option to sell more cattle into late autumn/early winter, but as James has excess fodder made and has good housing facilities, he will be in a good position to house these for the winter if necessary.

James has extra silage made this year and will decided if there is a market for selling some of this to boost farm income. 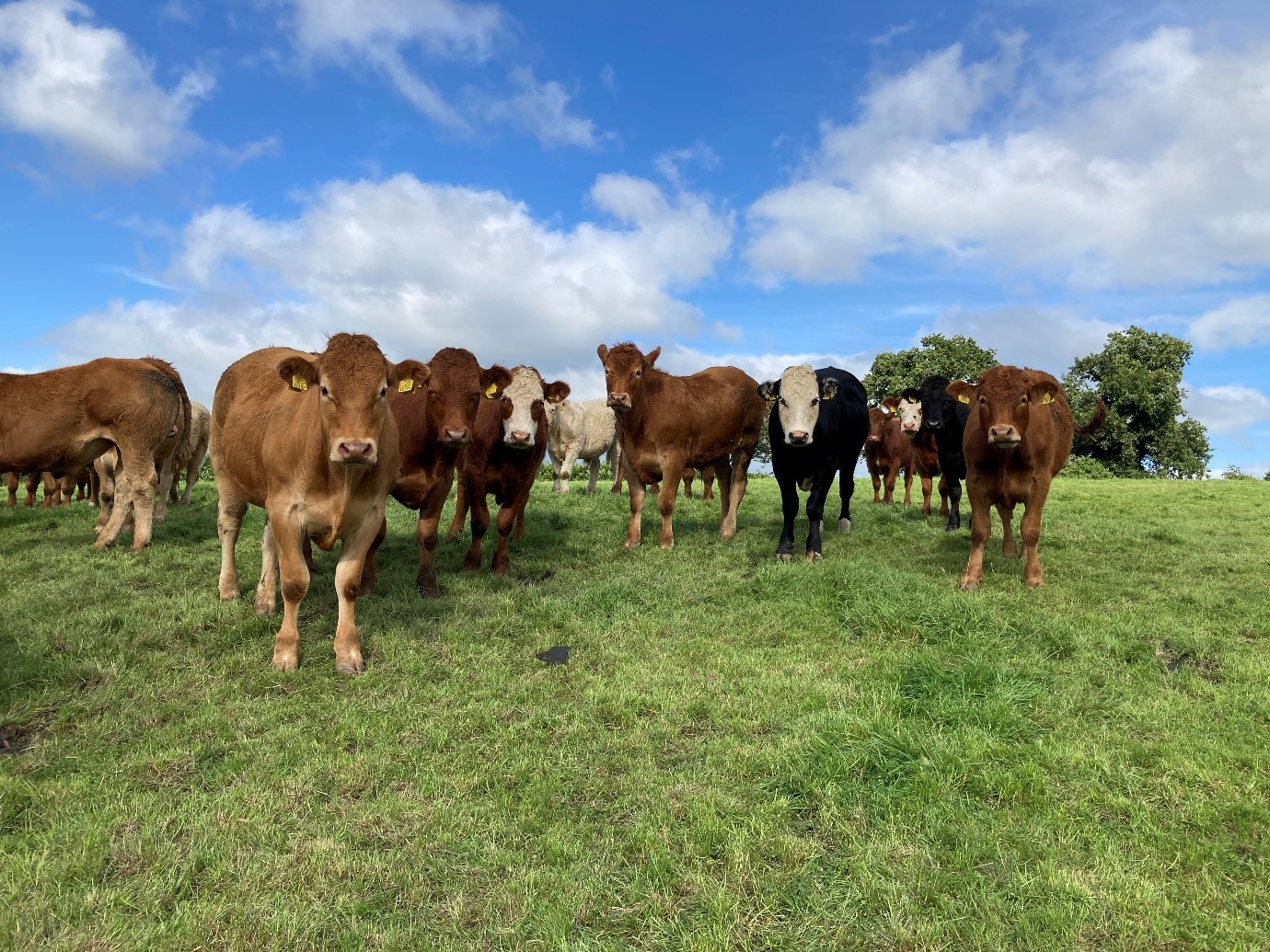 The cows and calves were weighed on the farm as part of the BEEP scheme. The average weight of the cows was 639kg. The heifer calves averaged 190kg and the bulls/bullocks averaged 220kg on the date of weighing.

The ICBF weaning performance report calculates an adjusted 200-day weight for each calf. It shows the heifer calves (11) at 248kg which is close to the target of 250kg. The male calves had a 200 day weight of 285kg which is below the target of 300kg. After examining the individual weights of the claves, it showed that two of the bottom males are twins which have gained 0.77 and 0.89 kg/day on average and this is dropping the group average. It is interesting to note that 8/10 of the bottom male and female calves are from 1st calved heifers, some of which were in calf to other bulls before arriving on James’s farm. The weaning efficiency (calf 200 day weight as a percentage of cow’s weight) was on target at 42%, so it is expected that the cows will wean a calf that is 50% of their body weight in the autumn.