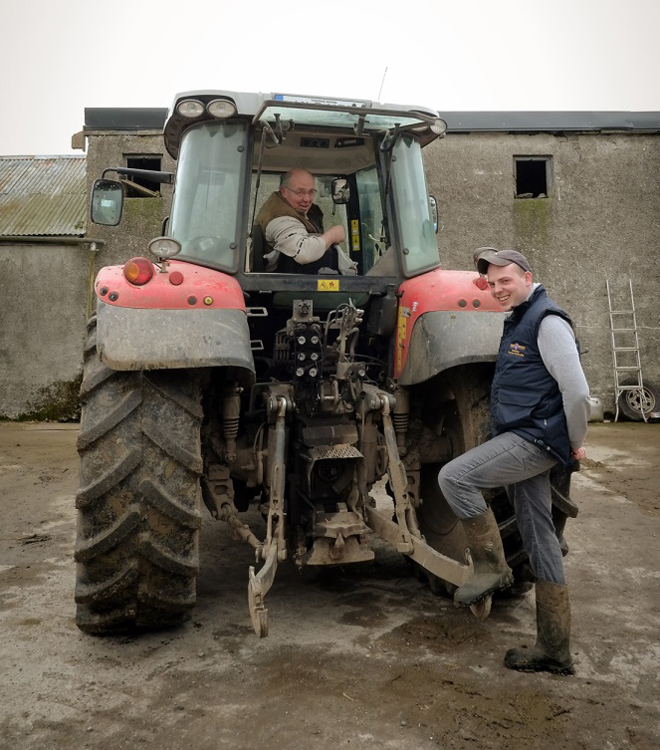 Pat and his son Eddie farm outside Ballingarry. Eddie is a recent graduate from Dairy Business and works off farm. They are currently milking 147 cows (Overall SR = 2.6, Milking platform SR = 2.7) and Eddie would like to milk 160 in the next few years. A small number of beef calves are kept and reared on the farm and sold as bull beef in November/December at 20-21 months of age while the dairy heifers are reared by Eddie on an out-farm. In 2015 the farm sold 434kg MS per cow (1060kg MS/ha, 5,400 ltrs/cow at 4.22% fat, 3.57% protein).

Last year the farm utilised approximately 11 tonnes of dry matter/ha and fed 550kg of meal per cow. The Kennedys have dry land that allows cows to have a long grazing season. Last year the cows were housed the last week of November and let out to grass from the 4th of February onwards (housed intermittently thereafter). The six week calving rate this year was 82% and all cows were calved within 11 weeks. The breeding season lasted 13 weeks and the three week and 6 week submission rates were 77% and 96% respectively.  . All heifers were bred within 4 weeks and then let off with the bulls. The herd EBI is €168 (2016 calves - €221) and cows have the genetic potential to produce milk with 4.26% fat and 3.6% protein.

The goal on Kennedy’s farm is simple; to produce 450kg of milk/cow at 3.6% protein and 4.3% fat on less than 500kg of meal. However to achieve this, all performance targets have to be met all of the time. Completing budgets, pre breeding scans, milk recording etc., allows the Kennedys to track performance and identify and rectify issues on the farm before they impact production. As the herd expands to 160 cow’s improvements in grass growth and utilisation will be required. More than 12.5 tDM/ha of grass will have to be grown to sustain the higher milking platform stocking rate if meal intake is to stay below 500kg.