Over 100 farmers visited Charlie Whiriskey’s farm last Friday. Charlie is a development farmer on Arrabawn’s Milk for Profit programme. Topics discussed on the day were land drainage, grassland management, breeding and farm yard development. Charlie milks 100 cows on a 52ha milking platform. Soils are heavy, which require additional management compared to some of the drier soils in Galway. Currently, 19ha of the platform is currently closed for first cut silage.  In 2016 the milking platform grew on average 10.5 tonnes/ha and there is potential to grow a lot more on the farm. Though the pH on the farm is adequate almost all of the land falls in Index 1 and 2 for P and K. James O’Loughlin from Teagasc Moorepark highlighted that this is a common feature among all the farms on the Heavy Soils Programme and that addressing soil fertility is the first step to developing land. He emphasized that compound fertilisers with low percentages of P and K provide far too little of the key nutrients no matter how often they are spread. Charlie has already begun to address his poor soil fertility and spread 2 bags of 0:7:30 on the entire platform in April.

A test pit was dug on part of the farm (7ha) that was bought 14 years ago. This land has never been developed and falls well below the average grass growth for the farm. Given the significant cost associated with drainage, James highlighted the importance of digging test pits to plan an appropriate and effective draining strategy. In this case James recommended that the land should be subsoiled as it is compacted and that deep drains should be dug on the targeted wet areas. Twenty to thirty metres between each drain is usually sufficient.

Last year was the first year that grass growth was formally measured on the farm by doing weekly grass walks and making appropriate decisions from the wedge that was subsequently generated. Due to the timely removal of paddocks with surplus grass as bales the cows were consistently offered grass at the appropriate cover of 1400kgDM/ha right through the summer season and this positively impacted milk production. Cows peaked higher than previous years at 1.84kgDM/ha and across the year produced an extra 27kg of milk solids compared to 2015. While this figure may sound small it amounted to €7,650 in additional income for Charlie last year.

In the midst of breeding this year Charlie so far has bred 96% of his heifers (a synchronisation programme was followed) and 42% of his cows within 14 days, a significant improvement on last year (25%-cows; 48%-heifers). Last year the decision was made to stop bulling cows a month earlier to shorten the calving season which had spread from January to July. This time last year there were nine cows left to calve on the farm while now there is only one. In addition, a batch of heifers were synchronised last year.  As a result, the six week calving rate has jumped from 59 to 69%. Charlie also remarked that because cows calved sooner this spring they had more time to recover between calving and breeding which has reflected in greater submission rates.

While significant improvements have been made in grassland and breeding management, priority must now be given to develop adequate milking facilities for an expanding herd. Currently the cows are milked in a seven unit herringbone. With over 6 hours each day spent milking Charlie has little time to do anything else.  Currently Charlie is planning to build a new milking parlour and options were discussed by John Fitzpatrick of Earls engineering and Pat Clarke of Teagasc on whether to expand the parlour in its current position or move it out to a greenfield site. Either way John emphasised the importance for farmers in the same position to spend considerable time researching and visiting other parlours to make the best decisions. John also advised farmers to set aside 24 months from start to finish for any substantial farm yard development. He advised that many farmers underestimate the amount of time needed to get planning permission, loan approvals and grant approvals.

Targets for the farm going forward are to improve soil fertility and grow more grass (13t) to reduce the amount of meal used (from 1.1t to <1t), aim for a six week calving rate of more than 80% within two years and to have a distinct calving and breeding season and finally to have new milking facilities by the end of 2018.  For more information see our handout available on the Arrabawn website. Special thanks to our speakers on the day James O’Loughlin, Tom Murphy, Pat Clarke and John Fitzpatrick and to Charlie and his family for participating in the programme. 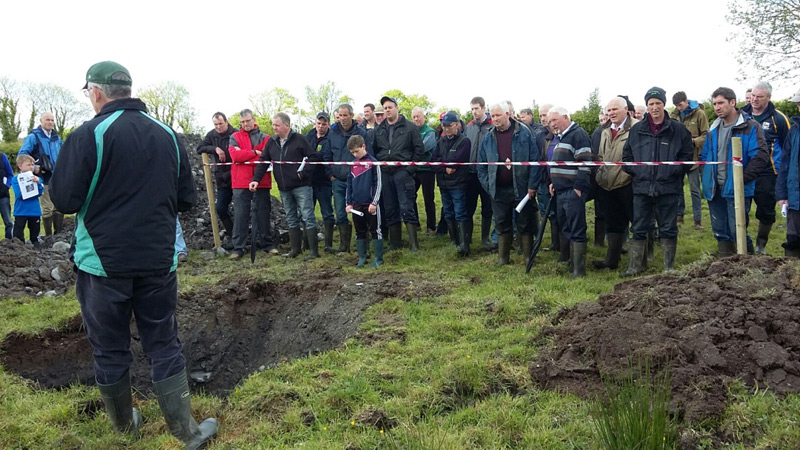 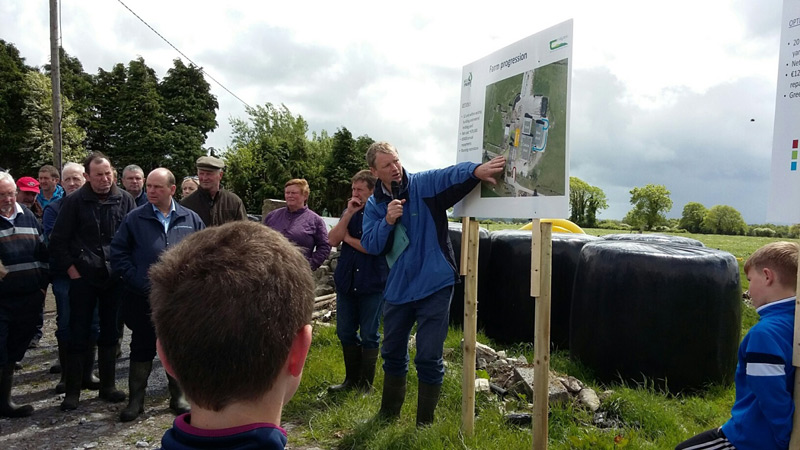 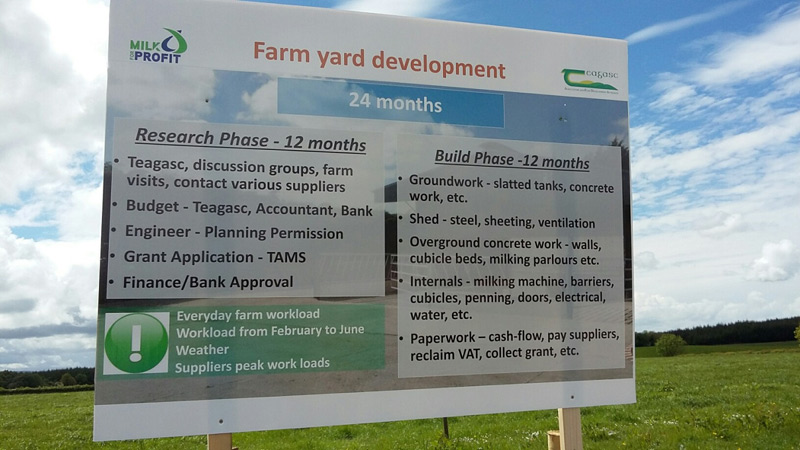 Timeline for farm development as outlined by John Fitzpatrick

Handout from the farm walk