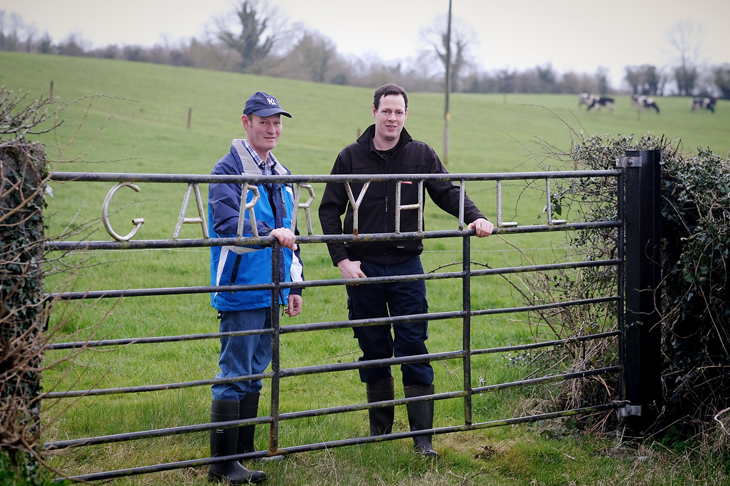 Trevor and his son Steven farm in a partnership in Aghancon, Co. Offaly. They are currently milking 110 cows with the potential to expand the herd to 150 cows by 2020. All beef calves are reared on the farm and the majority are kept to 24 months. The beef herd will be scaled down to accommodate the extra cow numbers. In 2015 the farm sold 342kg MS per cow (915kg MS/ha, 4357 ltrs/cow at 4.08% fat, 3.54% protein).  Milk solids per cow was quite low but given that, 48% of cows were in first and second lactation we expect that this figure will increase as the herd matures. Utilising more grass in the spring will also increase milk solids. Last year the farm utilised approximately 9.6 tonnes of dry matter/ha and fed less than 500kg of meal per cow. In early lactation cows are fed pit silage as a buffer as access to paddocks can be quite difficult which hampers milk solids production. In future high quality surplus bales will be kept and used to buffer feed milking cows in spring. In addition, particular emphasis will be placed on building appropriate grass covers in autumn and creating cow tracks within difficult paddocks so cows can get out earlier in spring. This spring cows were let out on the 11th of February and out fulltime by the 11th of March. This year the six-week calving rate increased substantially from 69% to 80% and the median calving date was the 20th February. This improvement will contribute to achieving greater milk solids per cow as lactation length increases.

There are plans for the phased development of additional slurry storage and for a cubicle house over the coming years. However, the main goal of the farm is to improve milk solid production before any substantial development is undertaken.  Since joining the South Offaly discussion group Trevor and Steven have seen the benefits of getting advice from other farmers and can see the benefits of improving the technical performance of their own farm. Continued improvements in six week calving rate, spring grassland management and soil fertility will improve grass utilisation and milk solids production on the farm and ultimately increase farm profit.