Feeding and Breeding for winter 2016

The message was clear and simple for the 80+ suppliers that attended last month’s workshop at Michael Freeneys  – We have to calve heifers down at 2 years old and then make sure that they calve down every 365 days thereafter. Why? To reduce costs and maximise profit.  Rearing heifers to 2.5 years instead of 2 years costs an extra €10,000 (based on rearing 17 heifers) with the majority of this cost attributed to increased feed costs. To make matters worse when heifers calve down at 2.5 years they end up having a lower lifetime milk yield and take longer to get back in calf. Maintaining a 365 day calving interval is equally important to maximise profit.  Though perceived to be less important for farmers supplying liquid milk there is significant losses endured when calving interval stretches to over 400 days. For a herd with one hundred 7000L cows the loss in milk revenue when calving interval is over 420 days was estimated to exceed €13,000. Ideally we want to calve all spring cows between February and April and all the winter cows between Oct and Dec. When the calving spread extends to most months in the year we end up supplying more winter milk than what’s required for our liquid quota (subsequently paid at manufacturing price) and have higher feed costs (don’t maximise grass). Not to mention the increased labour requirement to manage cows and young stock throughout the entire year. The average calving interval among liquid milk herds in Arrabawn is 409 days while only 34% of heifers calve down at 2 years of age. There is plenty of scope to improve profitability on farms by tackling these two parameters alone.

Cows need to calve down with a body condition score of 3.25 in order to optimise her chances of going back in calf. Calving down thin or fat cows brings its own issues and reduces the chance of getting cows back in calf. The majority of metabolic issues experienced at calving can be prevented by proper nutrition =, Doreen Corridan emphasised. “Too many farmers are caught up with treatments rather than preventing the issues in the first place” Ensuring sufficient supplementation of Magnesium (dry cow mineral must contain more than 24% Mg) and avoiding high K silage (>2.0%) in the weeks before calving will mitigate most issues. When formulating diets Joe Patton highlighted that in order to be cost effective we must feed to a realistic milk yield rather than feeding the herd based on the production of the top 10% of cows. Silage analysis is a must to determine quality. Silage offered to milking cows should have a DMD >70%. Knowing the DMD of silage offered to dry cows will tell you how much, if any, concentrate is needed to maintain/gain condition.

Special thanks to our host farmer Michael Freeney and the speakers Pat Clarke, Tom Murphy, Doreen Corridan and Joe Patton. 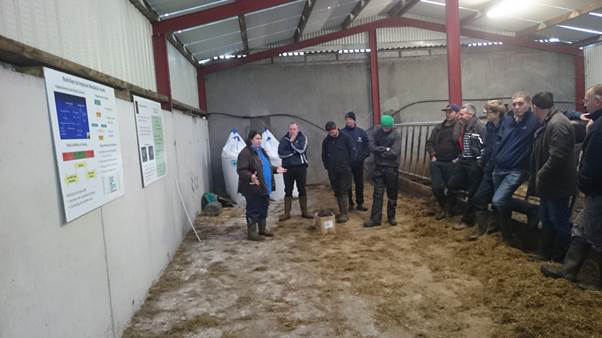