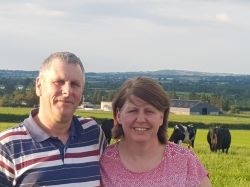 James and Nora Kennedy milk 150 cows on their family farm in Bawn, Nenagh, Co. Tipperary on a milking platform of 120 acres. Their cow type is a three way cross between Holstein Friesian, Norwegian Red and Jersey producing on average 1600 kg milk solids per hectare, with a herd EBI of 154 Euro. The land is a good brown earth soil known as an Elton soil type. His grazing season length extends from early February to mid - November. James plans to maintain his current stocking rate and instead concentrate on improving his nitrogen use efficiency and reducing his overall carbon footprint. James has already taken steps to ahieving these targets by switching to using protected urea products over the entire grazing season and spreading all his slurry with a dribble bar system.