For effective disease control in barley it is important to utilise all available control measures as part of an integrated pest management system. Over reliance on any one tool will be ineffective and unsustainable. Key to good disease control is the reduction of inoculum by all available means: cultural, varietal and chemical. The avoidance 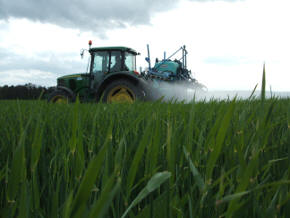 of a ‘green bridge’ through the early destruction of volunteers from previous crops will reduce inoculum carryover. Varieties should have good disease resistance (Refer to DAFM recommended list) and seed should be certified and disease free. Fungicides have a key role, the timing and choice of which is important to ensure optimum control.

Fungicide timing: Early season disease control in spring barley is essential to protect developing tillers and reduce the potential for disease epidemics, especially in early sown crops. The greatest response to fungicides is achieved at mid-late tillering and GS39/49. These applications protect tiller survival and green leaf retention. Delaying the final application timing until GS59 can lead to a reduction in the yield potential of the crop. 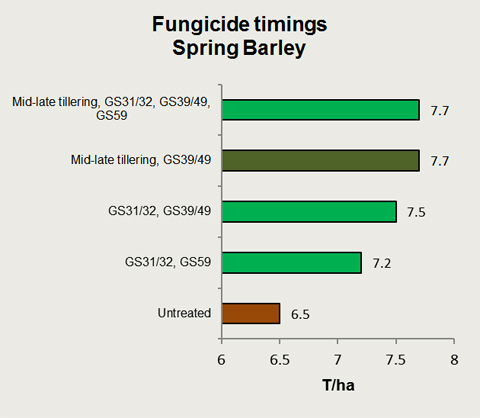 T1 should be applied around first node stage (gs 30/31) with the growth regulator. Mildew is the main disease threat early on spring wheat but Septoria may be present also.
The T1 will be based on triazoles +/- a mildewcide. Include Chlorothalonil (e.g. Bravo) with the triazole as an anti-resistance strategy.

T2 at flag leaf (gs 37/39) will be based on triazoles + SDHI 75-80% rate. Where necessary a mildewcide should be included at about ½ rate on mildew prone varieties. Include chlorothalonil (e.g. Bravo) with the triazole as an anti-resistance strategy.

T3 will be applied at heading and is important to reduce ear diseases.
It will be based on triazoles.

Use a disease control program similar to winter oats but rates of T1 & T2 may possibly be reduced.