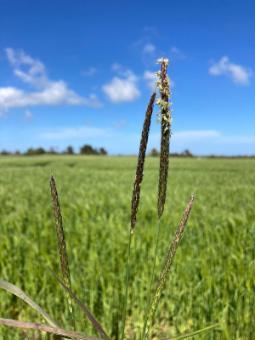 The webinars gave an insight into farms from across Ireland who are converting to non-plough based systems and also how these farmers are dealing with grass weed challenges.

Details of the webinars are as follows:

Host Ciaran Collins, Teagasc Tillage Specialist was joined by ECT focus farmer Simon Neville, along with his Teagasc Adivsor, John Pettit and ECT Project Manager Jimmy Staples to give an insight into his current cultivation system, some of the issues that he's had with grass weeds throughout the years and some of the plans he has in place to overcome these issues.

Garrett Browne, ECT focus farmer and his Teagasc Advisor Ciaran Hickey also joined the webinar to give an insight into how weather and soil conditions dictate what cultivation methods he uses, wild oat resistance, sterile brome on the farm and what he does to overcome the challenges on the farm.

Michael Grace who farms with his father Shay in Clane, Co. Kildare was joined by his Teagasc Tillage Advisor Ivan Whitten to discuss the sterile brome problems that they've experienced on their farm over the last number of years. Michael gives an insight into changes and practices that they've put in place on their farm over the past 10 years to control sterile brome on the farm.

Conor O'Callaghan, who is a Teagasc Crops Advisor based in north county Dublin discusses the issue of blackgrass on a couple of farms in the area, how it has impacted on those farms and the control measures that they've put in place to try and deal with that problem.

The final Enable Conservation Tillage (ECT) project webinar looked at blackgrass and sterile brome control on three ECT focus farmers and how the identification of resistant grassweeds on these farms will affect their management strategies.

Watch back the webinar below

ECT Project is a European Innovation Partnership (EIP) co-funded by the Department of Agriculture, Food, and the Marine (DAFM) under the Rural Development Programme 2014-2020.