The goal of the potato genomics research programme at Teagasc is to identify genes controlling traits, such as disease resistance and quality characteristics, which are important targets in the genetic improvement of the crop. This information can then be exploited in the breeding programme in order to develop better potato varieties.

A major limitation in our endeavours to understand the genetic control of important characteristics in potato was the fact that the sequence of the potato genome was largely unknown. This made it time consuming and difficult to identify genes underlying traits such as disease resistance and quality characteristics. Recently however, the potato genomics research group at Teagasc participated in an international project to sequence the potato genome, the results of which were published in the prestigious journal Nature.

Watch a clip of Dan and Denis talking about potato genome sequencing. 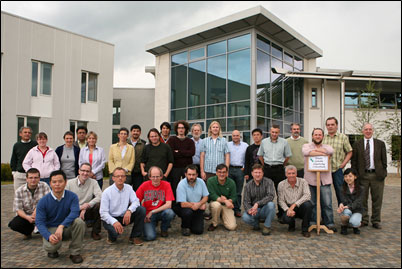 Sixteen research groups from fourteen countries came together to form the Potato Genome Sequencing Consortium. Pictured are some of the members on a visit to Oak Park Research Centre in 2011

Currently, our main focus is the exploitation of the genome sequence of potato for the identification of genes conferring resistance to important diseases of potato, such as potato cyst nematode (PCN or eelworm) and late blight. One of our biggest successes to date has been the identification of a region of the genome containing a gene that confers resistance to the problematic eelworm species Globodera pallida Pa2/3.

Eelworm is a serious problem in potato production, capable of seriously reducing yields, and control of the pest has become more challenging as the main agrichemicals used to control it have been banned in recent EU legislation. Consequently there is a renewed emphasis on the development of resistant varieties in breeding programmes by selection of progeny from crosses in which one or both parents express resistance due to the presence of particular variants of some key genes.

The main way in which we currently exploit the type of information generated in our genomics research is through a process called marker assisted selection (MAS). This involves developing genetic fingerprinting tests, similar to those used in human forensics and genetic medicine, which allow us to identify whether an individual potato genotype contains the beneficial variant of any particular gene.

This information can be used to choose parents for crossing in the breeding programme, and to identify potential disease resistant varieties several years earlier. Most recently fingerprinting tests have been developed for genes involved in resistance to eelworm, late blight and potato virus Y. These tests have been used to efficiently develop potato genotypes containing combinations of these genes from crosses involving parents containing individual resistance genes.

As the underlying science and technology progresses, we aim to use similar approaches to increase the efficiency with which we can breed for more complex traits controlled by networks of genes, such as quality and yield stability under adverse environmental conditions. It takes over a decade to breed a new potato variety, therefore genome-based research will become increasingly important in improving the efficiency with which we can respond to challenges such as climate change, a necessity for the reduction of inputs, and evolving consumer preferences.