At present there is a wide range of herbicides available for weed control in potatoes.
Herbicide selection will be dictated by three guidelines:

In general, potato herbicides may be divided into three main groups - contact, pre-emergence and post-emergence.

These include Retro, and Spotlight which are used to kill early emerging weed seedlings. These herbicides have no residual effect, and are often applied in combination with other residual herbicides to give season long control.

These are generally soil-acting and require rainfall soon after application to get the best effect. Metribuzin (Sencorex), and Defy are typical examples of these groups. They persist in the soil for 6-8 weeks after application, and create a chemical barrier to any subsequent weed growth. Any form of soil disturbance after application will break this barrier and allow weeds to germinate.
Be sure to read the product label very carefully, as the rate of herbicide to be applied will depend on soil type. Always check varietal restrictions when using metribuzin (Sencorex).

This group has definite foliar action as well as soil acting abilities, and is very useful in situations where an earlier application has been delayed due to bad weather. This groups includes Metribuzin (Sencorex), Rimisulfuron (Titus) which may be applied to crops up to 15 cm high.
The best results are achieved when the majority of the weeds are at the cotyledon stage of growth. Be sure to read the product label carefully, as these products cannot be used safely on every variety.

Volunteer potatoes are derived from leaving tubers in the ground after harvest, and from true potato seed, which can last in the ground for over 8 years.

Control of volunteer potatoes starts with the harvesting of the crop. Do not sort in the field, and do not even leave cracked and split potatoes behind. Make sure that harvesters are set up as to lose as few tubers as possible.

Volunteer tubers, or groundkeepers, mostly emerge in the season after the potato crop. The numbers emerging can be reduced by winter kill. To get good frost kill, do not plough until the spring. Nevertheless, it does require a total of 50°C freezing below -2°C to kill tubers, and winters have not been that cold recently.

Volunteer potatoes from seed can come up in summer or autumn. They are killed by over winter frosts. They are controlled by cereal herbicides, but often emerge after the herbicides have been applied. If they are not controlled, they produce one or two mini-tubers in the first year.

Potatoes in cereals - control with Fluroxypyr 0.75 - 1.0 l/ha + Harmony Max 100g/ha. Potatoes should have adequate foliage, 2 - 3" high. Thus winter cereals should be treated at G.S. 33 - 39.
The risk of disease carry-over and contamination of subsequent crops can be minimised by using set-aside as an opportunity for effective control.
Many growers, however, rush out with a glyphosate herbicide at the earliest opportunity; and fail to achieve the levels of control possible with a planned herbicide strategy.

Late application with glyphosate at 4l/ha. achieve better long-term control of the tubers. Whilst early-treated tubers can survive and may regrow the following season, the volunteers treated later in the season are more inclined to rot and be completely killed off.
Growers often spray the volunteers just two to three weeks before the end of the permitted set-aside spraying window, possibly as late as mid-August. By that time the plants could be in full leaf or flowering, but the overall level of control will be better.
The potato plants should be killed off before there is any significant threat of blight being a problem.

Use of sprout retardants in the crop

The use of maleic hydrazide (Frazor)in ware crops can delay growth and reduce vigour of volunteers in following crops, but timing is critical.

Potato damage from other herbicides 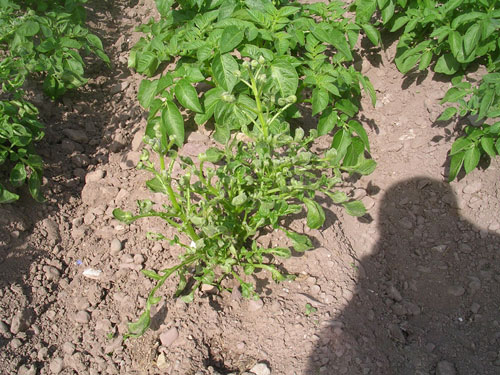 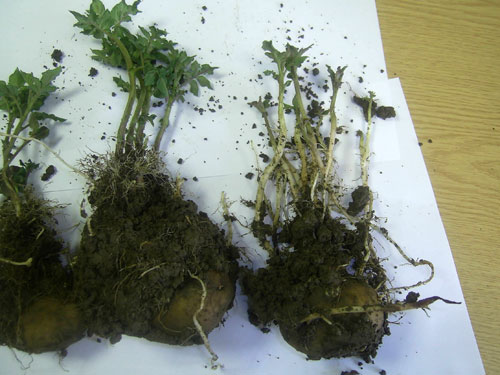 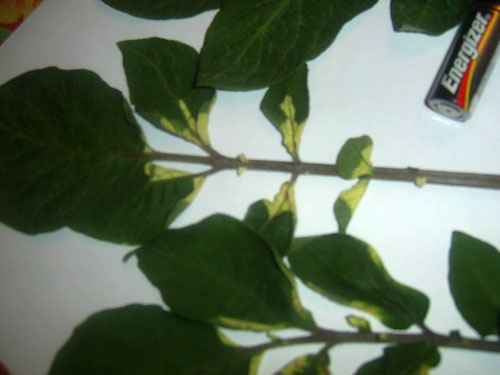