The potato breeding programme initiated in 1962, screens 100,000 seedlings each year. Thirty varieties for both national and international markets have been successfully developed. Rooster the best known of the Oak Park varieties due largely to its excellent taste and cooking quality.

The original objective of the breeding programme was to breed a high-yielding, late blight resistant variety for the Irish market to replace the traditional varieties such as Kerr’s Pink and Record. The introduction of plant breeders’ rights in the 1970s, increased demand for export varieties and the aims of the programme quickly diversified. Soon after, a commercial partnership was formed with IPM Potato Group Ltd. to exclusively market Teagasc varieties. Potato is the third most important food crop globally and is being promoted by the FAO as a hunger busting crop. The area under potato cultivation is increasing globally particularly in third worlds countries and this will fuel demand for new potato varieties with suitable traits and disease resistance. 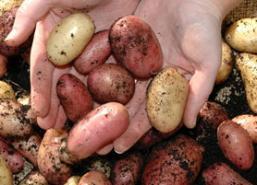 The potato breeding program at Oak Park has been in existence since 1962 and has released over 40 varieties since its foundation. Fourteen varieties have been released since 2002 and over 25 of these are still in commercial production today with a further five undergoing market development. Rooster is the best known of the Oak Park varieties due to its status as the most popular potato variety in Ireland. Since its release in 1991, the area under production has grown to over 55% of the total potato ware area in Ireland today. A list of varieties released to date is included in the table below.

Over fifty different traits are evaluated in the breeding of new potato varieties. Potato is unusual as many of the primary traits (tuber shape, colour, drymatter, taste etc) are influenced by the consumer. In most staple food cereal crops the consumer usually only sees the end product of flour or beer. Potato breeders must also satisfy the agronomic and disease resistance requirement of the primary producer or farmers. This precludes breeders and scientist from selecting new varieties very intensively for a single trait such as tuber yield as the other traits such as taste or disease resistance would decline. Cultivated potato is tetraploid (four sets of chromosomes), which complicates the breeding process compared to other food crops. Potato breeding relies on producing very high numbers of seedlings (over 100,000 new genotypes each year) to ensure the correct combination of traits are present with significant improvement in some specific traits. Over the next ten years breeders attempt to select out the best genotypes to make the next new variety.

The ability to identify traits of interest such as disease resistance traits at an early stage is key to the breeding process. This can be hindered by the destructive nature of testing for these traits whereby to discover if a potential new variety is resistant you must infect it and hence destroy it. This requires several generations of multiplying enough seed to enable destructive testing take place. By using markers associated with the gene governing these traits many of these limitations can be overcome by testing small amounts of plant material for the presence of the gene hence identifying resistant material at an early stage in the breeding process. Teagasc has invested in this marker assisted technology over the last decade though the Potato genomics research programme.

Details of the breeding process are outlined in the presentations and documents below:

Denis Griffin is a Teagasc researcher based in Oak Park Crops Research Centre. He is helping to develop different varieties of potato each year, which are marketed by Irish Potato Marketing. Here, he explains how recent advances are speeding up the breeding process.