How can it spread? 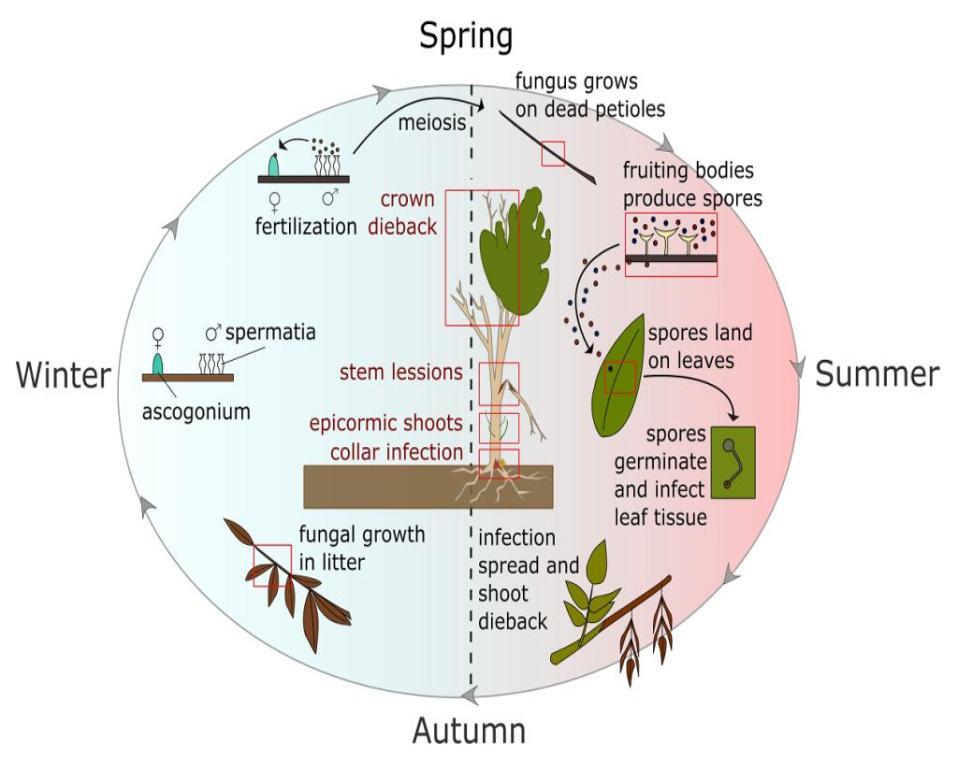 Infection first makes its way into a tree when the spores of the fungus are carried in the air and land on healthy leaves over the summer months. The spores germinate and the fungus then grows into the leaves and down into the leaf petiole (or rachis), and progressively into twigs, branches, and the stem. This progression causes the tree to lose a part of its crown and, in some cases, to collapse.

Once the leaves of ash trees fall on the ground in autumn, they are colonized by the fungus, which produces a characteristic blackened 'pseudosclerotial plate' on the rachises. These blackened rachises are further sheltered by the litter in the forest soil, allowing the fungus to survive overwinter.

In the sexual reproductive stage of the fungus, which takes place over the course of the summer and autumn months (June to October), very small mushroom-like fruiting bodies develop on the blackened rachises and decaying leaf litter from the previous autumn and winter. When mature, these tiny fruiting bodies release large quantities of microscopic spores into the air, some of which will land on the leaves of both healthy and previously infected ash trees to begin the cycle again.

Where the disease is already present in a locality, further local spread is likely to be caused by spores borne on the wind, each year travelling many kilometres from the original source. There is also a risk of introducing the disease into a locality where it is not yet present (and where that locality is at a considerable distance from an existing source of infection) by bringing already diseased ash seeds or plants into that area for the first time.

However, movement of larger diameter ash logs from infected areas is considered to be much lower risk as long as certain phytosanitary measures are properly implemented. These include ensuring the larger diameter logs have no evident signs of the disease (e.g. lesions or staining) and that all leaves and foliage (whether living or dead) are completely removed on site before transportation.