Forest owners may notice -especially in spring and early summer- browning and needle loss in Sitka and Norway spruce.

The culprit is a small insect called the Green spruce aphid (Elatobium abietinum). These aphids are 1.0 to 1.5 mm long, olive to dull green with red eyes and are generally wingless. It is different from other aphids in that it is active during the winter months, usually from October through to March and not during the summer. 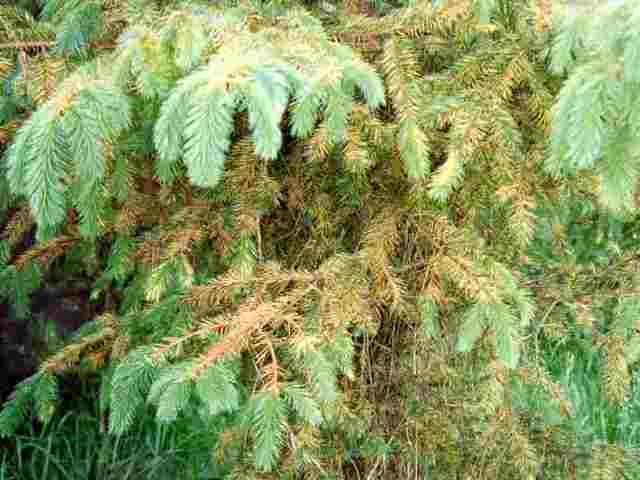 The aphids feed on the sap of older needles which develop a pale mottled discolouration during the winter. Black sooty moulds can also develop on some needles. Damage is most noticeable by June as many of these needles fall. New growth is unaffected and the contrast of the old sparse needles and the green new needles is striking.

Control of the aphid is limited; chemicals are really only effective in nurseries or in garden centres. There are natural enemies like the ladybirds, hoverfly larvae and parasitic wasps but they can only provide limited control. Fortunately, trees seldom die, but increment can be reduced. Infestations really only last for a year and the trees tend to recover. Mortality can occur in some cases particularly if the trees are under stress from some other cause e.g. water logging, nutrient deficiency etc.

Cold winters keep the aphid populations down; a period of cold temperatures -7Cº will kill off the aphids.