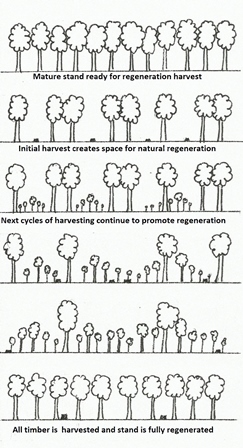 Under this system, and following decades of progressive re-spacing and thinning, the trees in the stand are brought towards a uniform target sawlog size. At this stage and usually over a period of 10-15 years, the stand is felled over a number of interventions while a new cohort of trees is regenerated in the partial “shelter” of the remaining trees.

The removal of the canopy trees can be carried out as follows:

The new trees in the resulting new forest can range in age somehow but eventually merge into a uniform structure and the cycle continues.