Number of trees and volumes removed during thinning

Although the return from the first thinning of conifer crops may be marginal, thinning is a necessary management operation in order to produce quality timber. 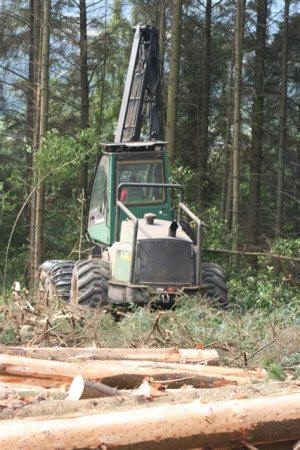 Thinning is the removal of a proportion of the trees in a crop. It is carried out to provide more growing space for the remaining trees and to provide timber and income before final harvest.

The higher the growth rate, the earlier the time of first thinning. Growth rate is measured in cubic metres per hectare per year and is known as Yield Class. Delaying thinning, to increase the timber volume harvested, may increase crop instability and the risk of windthrow. Age of first thinning for a range of species is shown in the table below.

From the Yield Class, it can be calculated how many times thinning should be carried out, how many trees will be left after each thinning, and how much timber volume will be produced each time.

Volume of production from one hectare of thinned Sitka spruce, Yield Class 20

Depending on demand and supply, Yield Class 20 Sitka spruce may be clearfelled earlier, for example at age 35 years.

First thinning may be a break-even operation, because, although the volume of timber is relatively large, it consists of low-value pulp and pallet sized timber, with some higher value stakewood.

However, the operation is usually preferable to create growing space for the remaining timber so that in the following thinnings, more valuable sawlog can be produced. It also allows access for the pruning of the final crop, where profitable. As further thinnings are carried out, the proportion of sawlog to pulpwood increases.

Without thinning, the amount of sawlog produced would be considerably lower. Sawlog is the most valuable product, followed by palletwood. Pulpwood has the lowest value.

Economies of scale result in lower harvesting costs and therefore a higher price for trees sold for clearfell.

The objective in thinning conifers is to maximise the volume of quality timber at clearfelling. As timber supply competition increases, quality will become increasingly important if farmers are to market their crop successfully.