In the period 1993-2000, ash seeds and plants were imported to fill planting demands. Although trees were imported in good faith as common ash, (Fraxinus excelsior), some of the imported material may have been common ash which had hybridised with a related species called F. angustifolia.

On many sites the imported plants, from this period, appear to be poorly adapted to growth in Ireland and it has produced trees with a very bad stem form. In some cases the plantations will not give a commercial crop of ash trees. Some of the hybrid material had brown buds in winter instead of black buds which are typical of common ash, and so they have become known as 'brown bud' ash. The characteristics of the hybrid ash overlap with native ash for many traits and it is difficult to identify hybrid trees with certainty. Fig. 1:

Fig. 1: Characteristics of some shoots in some 'brown bud' ash trees and in narrow leaved ash, F. angustifolia: 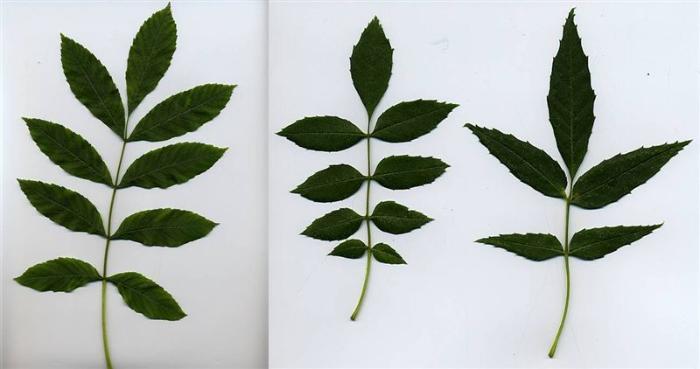 In some branches of some trees the hybrids have buds in threes rather than in pairs Fig. 2 . There is also a concern about the capacity of this hybrid material to produce seeds and to fertilise Irish ash trees. This might lead to genetic pollution of Irish stocks with an associated decline in genetic quality of seeds for the future.

This COFORD-supported research project developed criteria to clearly identify suspected hybrid ash. This involved the analyses of morphological and physiological characteristics as well as sets of molecular marker genes which helped to identify hybrid ash. An evaluation on the capacity of hybrid trees to produce viable pollen and seeds was also made.

Fig. 2 Characteristics of some shoots in some 'brown bud' ash trees and in narrow leaved ash, F. angustifolia: