Examining factors linked to windblow and if silvicultural practices can increase the stability of Sitka spruce forests.

The study –part of the WINDRISK project funded by COFORD– examined factors linked to windblow and if silvicultural practices can increase the stability of Sitka spruce forests. The project was a collaboration between Teagasc and UCD, coordinated by Dr Áine Ní Dhubháin (UCD) and Dr Niall Farrelly (Teagasc), and Master students Gonzalo González-Fernández (Teagasc/UCD) and Cian Gallagher (UCD). 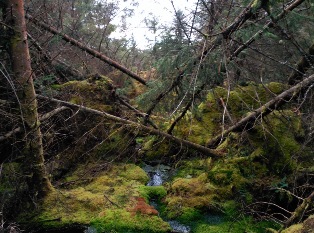 The windblow damage from Storm Darwin in February 2014 blew down 8,000 ha of forests in the southern part of the country. Loss of timber, the increase of costs (unscheduled thinning and clear-cutting) and the problems associated with forestry planning are some of the main problems, but indirectly it can increase disease attacks, the risk of fire or the erosion and the decrease on landscape quality and the wildlife habitat.

Previous research has shown (Ní Dhubháin et al., 2009) that five factors have the greatest influence on the occurrence of endemic windblow. These factors are: the height of the stand, location, soil type and altitude and whether or not the stand has been thinned.

The first part of the study being undertaken by Cian Gallagher identified if these are important factors in catastrophic windblow (windblow as a result of storms). This involved visiting areas that have been storm-damaged and recording site and crop factors and determining if certain factors are associated with higher levels of windblow damage.

The second part of the study examined if crop management (i.e. thinning) plays any significant role in crop stability. This investigation was carried out by Teagasc and by Master student Gonzalo Fernández.

The aim of the study was to determine the influence of thinning type, thinning intensity and timing of thinning and their influence on stability of Sitka forest crops on wet mineral soils.

Specific objectives of the study were:

The spread of the crown and root system for the different treatments.