The Grass10 campaign is in it's second four year phase 2020 - 2024. The focus of the campaign is to promote profitable and sustainable milk and meat production from grass on Irish farms.

Review of ’22 with PastureBase Ireland 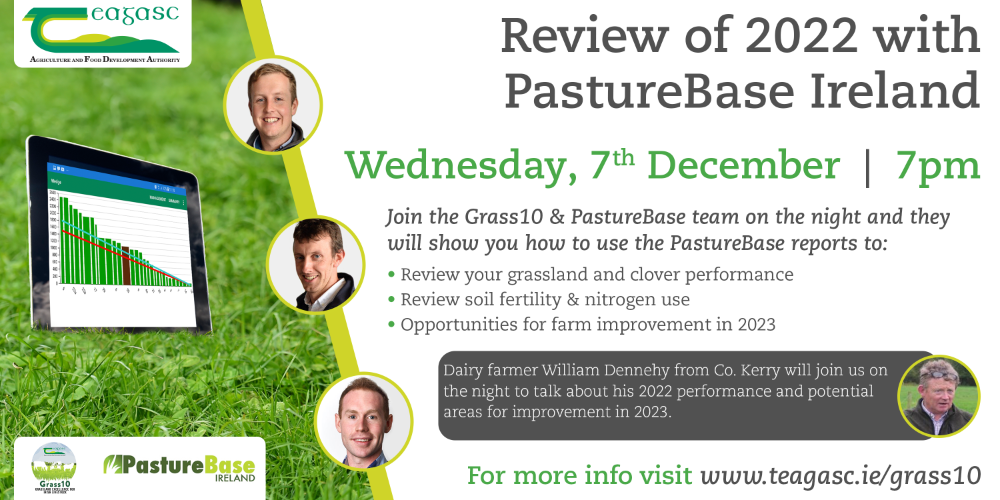 Join John Douglas & Joseph Dunphy from Teagasc Grass10 and Micheal O'Leary from PastureBase on Wednesday, 7th December at 7pm where they will show you how to use the PastureBase reports to:

Dairy farmer William Dennehy from Co. Kerry will join us on the night to talk about his 2022 performance and potential areas for improvement in 2023.

The primary objective of the Grass10 Campaign was to utilise 10 tonnes of grass DM/ha/year using 10 grazings per paddock on grassland farms in Ireland. As well as working closely with all partners and Teagasc advisory programme, the Grass10 programme worked closely with the Grassland Science Department in Teagasc.

Ireland’s natural resource of almost four million hectares of grassland, combined with our mild, moist and changeable climate, provides us with a significant comparative advantage over other international milk- and meatproducing countries. These twin advantages allow Irish farmers to grow abundant grass, and produce milk and meat naturally and at low cost.

Despite the established benefits of grass-based milk and meat production, Irish livestock farmers are currently not optimising grass production and utilisation. Indeed, Teagasc research indicates that the current levels of grass grown (and utilised) on dairy, beef and sheep farms can be increased significantly. Closing the gap between current levels of grass utilised and the Grass10 target of 10t DM/ha/year utilised, will support significant increases in milk and meat production. Achieving this will require changes in farm practices associated with both grass production and utilisation, including soil fertility, sward composition, grassland measurement and grazing infrastructure.

The Teagasc Grass10 campaign is supported by:

The potential reward of utilising more grass in livestock production is huge – for farm families, rural Ireland and the national economy. Teagasc estimates that if grass utilised were to be increased by one tonne DM/ha/year, the benefit to dairy farmers would be €181/ha and €105/ha to drystock farmers.

The Grass10 campaign will feature activities in four broad areas:

Grass10 will develop a body of agreed resources, tailored to the needs of various user groups, that is research based. This will be gathered into one single, easily accessible resource available to all. Actions will include the review of existing materials, the development of new materials, and the design of a training module.

A key objective of Grass10 will be to build the capacity of three groups of people: (1) farmers; (2) students; and, (3) advisors/teachers/consultants. Training courses will be delivered with the aim of upskilling livestock farmers in best practice in grassland management. Additional actions will relate to supporting the rollout of the revamped PastureBase Ireland website, which will assist livestock farmers in making precision grassland management decisions.

A comprehensive communication strategy will highlight Grass10 messages to all grassland farmers and their advisers. Actions will include the delivery of events/demonstrations, the creation of a network of ‘Grassland Champions’, the launch of a new Grass10 website, and the provision of regular newsletters/timely updates.

Grass10 will establish targets and measure progress in terms of both grass production and utilisation. Actions will include the production of an annual progress report, the launch of a ‘Grassland Farmer of the Year’ competition and the launch of ‘Annual Grassland Awards’.

Grass utilised (measured in tonnes DM/ha) can be increased on farms by either increasing the amount of grass grown and/or improving the utilisation rate. How much grass is grown is influenced by soil fertility, sward composition (ryegrass/clover content of swards) and grassland management decisions (including measurement). The utilisation rate is influenced by grazing infrastructure, grazing management and grassland measurement. The Grass10 campaign will focus on each of these areas. 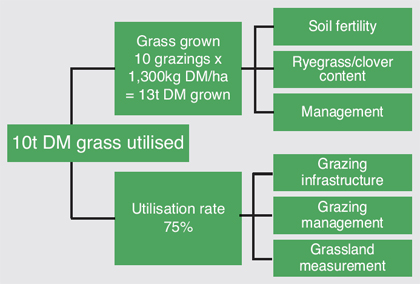 Better grass use on grassland fams

Teagasc recognises that the collaboration of a number of organisations in the Irish agri-food industry is required to achieve the Grass10 objectives.
Currently the Grass10 campaign is supported by the Department of Agriculture, Food and the Marine; AIB; FBD Trust; Grassland Agro; and the Farmers Journal. As the campaign progresses, we will look to involve and collaborate with further industry partners to assist with the design and delivery of a range of Grass10 activities.
For further details, contact Dr Tom O’Dwyer at tom.odwyer@teagasc.ie or tel: 076-111 2499.

Increasing grass utilised by 1.0t DM/ha/year would be worth €173/ha to dairy farmers and €105/ha to drystock farmers.

Eddie O'Donnell #Grass10 - Grassland Farmer of the Year winner 2017. He has increased his dry matter production steadily from 2013 - 2017. Eddie uses Pasturebase Ireland to help him determine the level of grass supply on his farm. Watch this short clip to find out more.

Grazing management training courses for farmers will commence around the country this spring.

Find out more and express an interest here