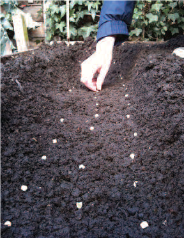 Peas are one of the most ancient and nutritious vegetables. There are three main types: shelled peas, mange tout and sugar snap. The traditional pea is the shelled type where you extract the peas and discard the pod; the more modern types are the mange tout and sugar snap where both peas and pod are eaten. The difference between the latter two lies in the development of the individual pea – the mange tout is underdeveloped in a flat pod, whilst the sugar snap has a developed pea in a thicker pod. The shelled peas can be divided into two types – round and wrinkled seeded – in the dried form. The round are hardier and used for early and late crops and wrinkled are less hardy and generally sweeter.

Sow from March to June, every two to three weeks for succession if required, in flat bottomed drills 5 cm deep, 15 cm wide, spacing the seeds roughly every 5 cm apart. Allow 90 cm between the rows. Could also be sown on a bed at a density of 50 per m2 (seeds sown about 14 cm apart). Extra early crops of peas may be had by sowing first early varieties in pots placed in frames, early in February and planting them out in April. Takes 7-15 weeks from sowing to harvest depending on sowing date.

On poor soil, where it is necessary to apply manure at the time of sowing, a trench should be opened 30 cm wide, and of the same depth, in which a layer of well-rotted manure should be placed, dug in and mixed with the soil from the trench. No nitrogen is required as pea roots develop nodules on their roots that fix nitrogen from the soil air.

Generally peas require some sort of support for the leaf tendrils to hold on to and for ease of harvest but the newer varieties are shorter than the older and easier to support. This is particularly the case with the semi-leafless varieties. Traditionally tree branches (especially Elm) were cut in winter and used to stake the pea crop. Nowadays it’s more likely that plastic pea netting or sheep fencing will be used. Whatever you choose it’s important that the support be placed to the peas before the stems bend, i.e. before they have reached a height of 10cm. Having said all that peas can be grown without staking but it’s messier.