For years spinach was a less than popular garden vegetable until rescued by the arrival of baby leaf spinach on the supermarket shelf. Baby leaf is the exact same as standard spinach just harvested at a small plant stage. It likes rich ground and is one of those crops that will benefit from the addition of compost or manure to the soil. 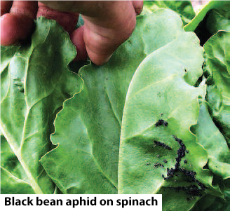 Spinach is one of the most sensitive plants to long days. Just one summer’s day of 13 hours will induce flowering (bolting) in certain varieties. Hence traditionally the best time for spinach production was autumn, winter and spring, along with the oft repeated advice that summer sowings should be made little and often.

However modern varieties have been bred to be much more bolt resistant. Sow in 30 cm rows eventually thinning to 5-15 cm apart. Ensure the variety you pick is sown at the correct time.

Correct variety notwithstanding, dry hot weather can trigger bolting so shade will help and water during dry spells. For milder areas late sowings made in August and September will yield from October to April.

Downy mildew can be an issue with this crop, and the best defence against it is to look for varieties with the greatest degree of inbuilt resistance. You may see that a certain variety is resistant to a certain number of races of downy mildew e.g. races 1-11, and the higher the number the better. If the variety you are using comes down with mildew try a different variety next time round.

Baby leaf spinach is sown from March to first week September and takes from 3-7 weeks to yield depending on time of year. Sow at a density of 500-700 seeds per sq m in rows 7.5 cm apart.