Swedes are a traditional winter vegetable, that’s now available all year round in the shops. It’s a hardy vegetable well able to withstand most frosts but can bolt if sown too early.

Swedes will grow on a wide range of soils and have a low nitrogen requirement. It’s a crop suited to slow steady growth but if conditions are too rich they will grow too fast, split, and develop soft rots. A warm wet August combined with an over fertilised crop are the classic condition for cracks and splits to develop. So it’s best not to apply any compost or manure prior to sowing the crop and watch the nitrogen. They are also tolerant of relatively low pH.

The crop is normally direct drilled but early crops can be sown under protection in modules and planted out. Single seed the cells and plant out a month later in April using a wide spacing (30 cm) and cover with fleece if extra earliness is required. The direct drilled crop is sown from April to mid-June with the main crop sown in May. At a push one can sow to the end of June. Drill 2 cm deep.

In comparison to turnips swedes are quite a slow crop to develop but will stay fit for harvest for many months. It takes about 15 weeks for the first ones to come fit. Late sown crops in June will allow the crop go out to spring harvest with reduced woodiness developing in the roots. At the tail end of the harvesting period the crop will send up flowering shoots in April – by keeping these topped the season can be extended by a few weeks.

Crop density usually varies from 10-16 plants per m2 with around 13 per m2 fairly typical for a commercial crop that requires a 0.8-1 kg head weight. Early swedes are about 500g. You can experiment with different spacings depending on your requirements but try 40x20 cm that equals 12.5 per m2. For early or late crops increase the spacing a bit to 40x25 or 40x30 cm.

Swedes are prone to a disorder called ‘Brown Heart’ which is caused by a deficiency of boron, that can be particularly prevalent on high pH soils. If you come across the problem apply 2-4 g per 10 m2 of Borax at the 4 leaf stage to prevent its occurrence in subsequent seasons. Commercial growers spray routinely for this common problem along with using a boronated compound. 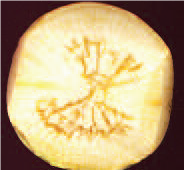 There are two pests that can cause trouble. If you notice pin-prick holes in the leaves when the plant is small, particularly during a spell of fine weather, it’s probably flea beetle. If you spot white maggots feeding on the roots it’s more than likely to be those of cabbage root fly. In both cases the best way to avoid them is to use crop covers, either fleece or bionet. Most of the commercial crop is now covered with insect nets. Egg laying by cabbage root fly begins at the two leaf stage of the crop so get on the nets before then and leave them on until the end of September.

If you delay your sowing to late May you’ll avoid the first generation of cabbage root fly, which is always significantly worse than the second generation which occurs from July to September. Swedes are also prone to downy mildew but is normally not a problem as the crop will grow out of it. In warm dry summers powdery mildew can make an appearance and if desired can be controlled with sulphur sprays.

Magres which was introduced in 1980 is the standard commercial swede variety. It’s a very versatile high dry matter variety. This means that it’s hardy in most winters but also renders it tough to chop in the kitchen when it reaches maturity. Magres is prone to downy mildew but is resistant to powdery mildew.

Marion and Invitation have good resistance against clubroot and powdery mildew. Helenor has an attractive dark purple colour with a sweet taste. Gowrie is a low dry matter Scottish variety that exhibits vigour, good resistance to downy mildew and is suitable as an early variety; prone to frost. Hybrid varieties are a new development in swedes and the best of them is Tweed which is a vigorous variety well suited to less fertile soils and produces uniform globe shaped roots.

Swede crop covered with a 1.3 mm net to keep out cabbage root fly. A 0.8 mm net will in addition keep out flea beetle and reduce aphid attack.