Soils maintained close to the target pH will have benefits of increased grass yields; more efficient utilisation of applied fertilisers and manures; and better persistence of more productive species in the sward such as perennial ryegrass and clover. Limed soils also tend to release more N from the soil organic matter. Increases in N release of between 50 and 70 kg/ha/yr of N have been estimated previously. This would be worth approximately €60-85/ha at current fertiliser N prices.

The optimum soil pH for grassland is at or above 6.3. To achieve this, Teagasc advice sets the target pH for grassland at 6.5. This allows for the slow pH changes that occur after liming and the gradual loss of lime after the target is reached. It assumes that the period between lime applications is not long. Short-term leys should be limed to the required level of the most sensitive crop in the rotation.

Liming of grassland should be done at least every 5 years. For reseeding pastures, best results are achieved by spreading lime at the time of reseeding, when the lime can be well worked into the soil.
Surface acidity often occurs in the top 50 mm in grassland soil to high rainfall and heavy usage of nitrogenous fertilisers; this reduces the availability of fertiliser P. For this reason it is better to have frequent small applications of lime than one large application. Keeping the pH above 6.0 in grassland improves N recycling and reduces total N requirements.

Very acid land should be limed immediately. There is no best time to apply lime, provided it is spread evenly on the surface of the soil. Thus, ground limestone can be spread at any time and pasture fields can be limed in rotation. Grass can be grazed as soon as the lime has been washed off the leaves by rain. If the lime advice for grassland exceeds 7.5 t/ha ;initially only this amount should be applied, and the remainder applied after two years.

In grassland soils that are high in molybdenum (Mo), it is important not to raise the pH above about 6.2, as increasing the pH above this level increases the availability of Mo and this in turn induces Cu deficiency in animals by reducing Cu absorption. High Mo soils often occur on carboniferous black shales and calp limestone. Molybdenum also becomes more available with increasing soil pH. Therefore, lime application rates on such land should be reduced up to  5 t/ha, depending on soil pH.

Lime breaks down the tough sod of old pastures on very heavy wet soils giving rise to a greater risk of poaching. A 'little and often' approach to liming should be used in such cases. 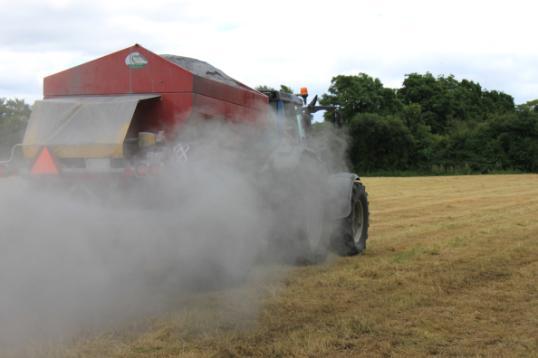