During the past century our knowledge of trace elements and their importance in crop and animal nutrition has grown steadily. More recently their role in human nutrition has been increasingly recognised. This chapter outlines the present position regarding the content and distribution of some trace elements in Irish soils. The soil status of the different trace elements is shown in a series of maps but it must be emphasised that the formulation of such maps is an ongoing process subject to continuing review and refinement consequent on emerging research findings. It is most important to interpret the maps correctly. For instance not all farms within areas designated as anomalous will have a particular trace element problem. With the intensity of sampling employed, the maps can only highlight high-risk areas, but they serve to draw attention to the possibility of a particular problem arising.

Certain geochemical and pedological tenets are taken into account when considering the likely status of any particular trace element in soils. The nature of the parent material provides a starting point and is indicative of likely total contents in soils. For instance, it can be reasonably assumed that soils formed from acid igneous rocks will have low contents of a number of biologically important trace elements because the minerals with which these trace elements are normally associated are not abundant in such rocks. Conversely, soils formed from fine-grained sedimentary rocks such as argillaceous or clayey shales will, on average, have higher contents.From the point of view of plant nutrition, however, it is not so much the total but the available content which is of greatest importance. Soils may have relatively high total contents yet the amounts available for plant uptake may be quite small. Factors such as soil pH, organic matter content and drainage status all affect the availability of trace elements to plants.

With regard to Irish soils it is necessary to recall that in the majority of cases they were not formed from the weathering of rocksin situ, but from glacial and fluvio-glacial deposits of one kind or another. This immediately explains their relatively complex distribution patterns. The nature of the glacial deposits which form the soil parent materials varies both in composition and texture. The former reflects the rock types over which the ice moved, the latter results from the interplay of various factors and events inherent both in the presence and in the retreat of an ice mass. Glacial deposits vary from coarse-textured sands and gravels which form the parent material of (for example) the Athy soil complex, to the heavy-textured tills from which many soils in the drumlin areas are formed. Fig. 1, adapted from Charlesworth (1963), shows the distribution of some glacial and fluvio-glacial deposits in Ireland. This diagram is useful in providing a rough guide to the location of heavy- and light-textured soils but the precise distribution of different soil types and information on their chemical and physical composition is only known for those counties where a soil survey has been completed. 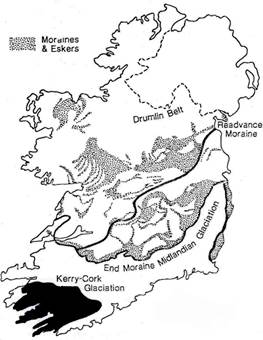 The availability of trace elements in soils is assessed by extracting the soils with reagents which purport to indicate their potential for supplying these elements to plants. It cannot be too strongly emphasised that such analyses must be correlated with field response data before they can assume any credibility. Because of the complex nature of Irish soils this presents special problems insofar as extensive field trial data are often necessary in order to achieve acceptable levels of correlation. Excessive extrapolation of soil analysis data is obviously scientifically unsound and can only result in error and confusion.