Cobalt in the form of vitamin B12 is required by animals and humans. In plants it does not appear to be required by non-legumes. It is essential for nitrogen fixation by Rhizobium and thus is indirectly required by legumes.

In practical agriculture its importance lies in the ability of different soils to supply sufficient of the element for efficient nitrogen fixation by clovers on the one hand and for ruminant nutrition on the other. In Ireland, soils with inherently low levels of the element are formed mainly from acid igneous rocks, e.g. granites and rhyolites, from sedimentary rocks such as sandstones and conglomerates and from metamorphic rocks as typified by quartzites, schists and gneisses. Peat soils are also inherently low in cobalt. Levels of cobalt in limestone soils .are very variable depending on the purity of the parent rock. Contents in shale soils range from low to quite high, depending on whether the shales are arenaceous (sandy) or argillaceous (clayey). Cobalt levels in Irish soils formed from a variety of parent materials are shown in Table 1 (Fleming, 1978). 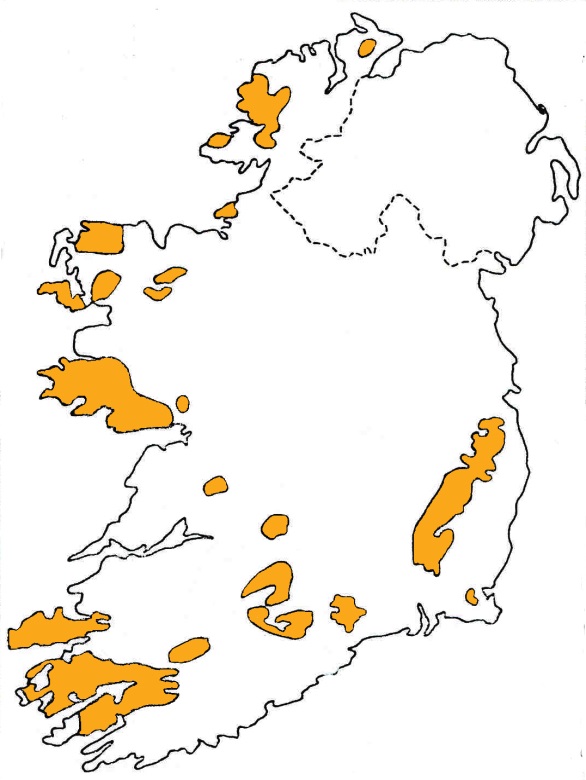 Low-cobalt soils (less than 5 mg/kg) have been mapped by Walsh et al. 1952 (Fig. 1). This serves to pinpoint areas where the risk of cobalt deficiency in stock is high. Such maps however do not reveal the true extent of risk areas. There are many soils where total cobalt contents are quite high but where the availability to the pasture is very poor. This is particularly apparent in limestone and shale soils and the factor primarily responsible is the high content of soil manganese (Fleming, 1983). Here we have an excellent example of the interaction in soils of one trace element with another. Research in Australia highlighted the significance of various forms of manganese dioxide in binding soil cobalt (McKenzie, 1967; Adams et al., 1969).

Manganese dioxide minerals often occur in soils in extremely finely divided forms which results in their absorptive capacity being out of all proportion to their mass content. The crystal structures of these compounds are such that they readily accommodate cobalt ions into very stable structures. In short, the availability of cobalt in high Mn soils is severely restricted even in soils with high total Co contents.

Podzolization strongly influences the content of cobalt in topsoils. During the podzolization process cobalt is leached from surface horizons and deposited in the iron-rich B horizon. Many hill land soils, already inherently low in cobalt, are further depleted by podzolization. Frequently these soils are overlain by blanket peat and here cobalt deficiency in mountain sheep can be a problem unless remedial measures are adopted. The effect of podzolization on soil cobalt is shown in Table 2 (Finch and Ryan, 1966).

Soil analyses for Co are of little value unless accompanied by parallel analyses for manganese. Only when both analyses are available can one predict the likely herbage content or the benefits which might accrue from applied cobalt. Various extractants have been employed in the estimation of plant-available cobalt. Some such as dilute acetic acid are very useful on acid soils but have in our experience proved of little value on limed soils

The significance of cobalt (Co) in nutrition arises because it is essential for animals rather than for plants. It is especially important for ruminants as, without Co, rumen bacteria are unable to synthesise the cobalt-containing vitamin B12. In plant nutrition, cobalt does not appear to be necessary for non-legumes but, because it is essential for nitrogen fixation by Rhizobium, it is indirectly required by legumes. The requirement by animals for cobalt varies with type of animal and age. Co requirement of common farm ruminants are in decreasing order as follows: weaned lambs > adult sheep > young cattle > mature cattle. Cobalt deficiency is therefore classically associated with sheep but in very deficient soils cattle can be affected. Apart from improvement in thrive following cobalt supplementation, improvement in fertility has also been recorded (Alderman, 1963).

Soils with inherently low concentration of Co are formed mainly from acid igneous rocks, i.e. granites and rhyolites, from sedimentary rocks such as sandstones and conglomerates and from metamorphic rocks as typified by quartzites, schists and gneisses. Soils formed from limestone vary in Co concentration depending on the purity of the parent rock. Concentrations of Co in soils derived from shales depend on whether the shales are sandy (arenaceous) or clayed (argillaceous). Peats always have low concentrations of cobalt.

Podzolization strongly influences the content of cobalt in top soils. During the podzolization process cobalt is leached from surface horizons and deposited in the iron-rich B horizon. Many hill-land soils, already inherently low in cobalt, are further depleted by podzolization. Frequently these soils are overlain by blanket peat and here cobalt deficiency in mountain sheep can be a problem unless remedial measures are adopted.

Mobilization of trace elements in soils is affected by a number of factors and in temperate regions drainage can play an important role. This is especially so in the case of cobalt and it is common to find greater quantities of extractable Co in the gleyed horizons of poorly-drained soils than in corresponding depths of well drained soils on the same parent material. Walsh et al. (1956) found that in poorly drained soil, 10 percent of the total Co was extractable with dilute acetic acid, whereas in a well-drained soil on the same parent material only 2.6 percent of the total Co was removed. Such increases in extractable Co are reflected in increased plant uptake from poorly drained soils. Mitchell et al. (1957) compared mixed and pure swards from well and poorly drained Scottish soils and found five to eight times more Co in herbage growing on the poorly drained soils. The explanation for increased availability of cobalt from poorly drained soils lies in the breakdown or weathering of Fe and Mn oxides with which cobalt is associated. The breakdown occurs readily in the reducing environment associated with poor drainage conditions.

A typical example of the effect of one element on another element is the influence of manganese (or more correctly the oxides of manganese) on the availability of soil cobalt. Oxides of Mn carry high negative charges, except under extremely acid conditions, and have large surface areas - out of all proportion to their weight,- and, because of the size and charge of the cobalt ion, have very high sorption capacities for the latter. Of the micro-nutrients Co is the most attracted to the surfaces of the Mn oxides and is ultimately trapped in their lattice structures and is thus rendered unavailable to the plant. Under poor drainage conditions the soil pores become filled with water rather than air producing reducing conditions. The stability of the oxides of Mn is thus weakened and the resultant mineral breakdown releases the trapped Co which are then ready available for plant uptake. Liming with its resultant pH increase has the opposite effect.

Different grassland species contain varying quantities of cobalt. It is generally assumed that clovers contain more than grasses. Whereas this is true when there is a plentiful supply of Co the reverse may obtain when Co supply is limiting. Among the grasses themselves, ryegrass (Lolium spp.) generally contains more Co than other species such as cocksfoot (Dactylis) and timothy (Phleum) (Reith and Mitchell, 1964) but differences are often marginal especially when the general level of Co is low (Fleming, 1963). Levels in Irish pastures typically range from 0.02 to 0.11 mg/kg. The desirable level of Co in pasture is 0.1 mg/kg for lambs. Data for the true Co content of herbage are often difficult to obtain as any soil contamination of the herbage exercises a significant effect. Unless Co levels in herbage are accompanied by a statement of the degree of soil contamination they are quite meaningless.

Evidence relating to seasonal variation of cobalt in pasture herbage appears contradictory. An autumn increase in the Co content of ryegrass was obtained by Reith and Mitchell (1964). A decrease was recorded by Fleming (1970a) when under conditions of frequent cutting and N application, the Co content of perennial ryegrass ranged from 0.06 mg/kg in spring to 0.03 mg/kg in autumn. Variation in sward management may well explain these diverse findings. In practice the onset of cobalt deficiency in sheep often occurs in late summer or early autumn especially when animals are grazing regrowth material.

A slight downward trend in the Co content of perennial ryegrasses was observed by Fleming (1970a) but was not as pronounced as in the case of copper. Cobalt tends to concentrate in the seed heads of grasses and this may account for the relatively small change in content with increasing plant maturity.

Liming decreases Co levels in pastures (Wright and Lawton, 1954; Reith and Mitchell, 1964). Pastures with mixed species often reveal variable levels of Co because of botanical composition changes occurring after liming. Care must therefore be taken to ensure that the sample is representative of the sward. Lower Co contents were found in both ryegrass (especially) and clover following liming but the effect was not as pronounced with mixed species samples (Mitchell, 1957).

Application of cobalt salts to soil can be a useful method for raising the Co status of herbage, but the efficiency with which this is accomplished varies widely between soils. On light-textured soils and peats the response in terms of Co uptake by herbage can be quite large but on heavier-textured soils the reverse is usually the case. Whereas soil pH, clay, and organic matter content all play a part in determining the availability of Co to herbage, as already stated, the oxides of manganese are more often the prime regulator of the movement of Co from soil to plant. Research in Australia (Taylor and McKenzie, 1966; McKenzie, 1967, 1970; Adams et al., 1969) leaves little doubt that this is so and that Mn oxides can be regarded as the primary sink for soil cobalt. Fleming (1983) reported on the relationship between cobalt and manganese in Irish surface soils and soil profiles, and on the effect of the application of cobalt sulphate to Irish soils of differing manganese status (Table 5).

Soil application of cobalt sulphate at a rate of 2 kg/ha is frequently employed, and if the entire grazing area is being treated the financial implications must be considered. In practice, it will probably suffice to treat one third of the area in Year 1, another third in Year 2 and the final third in Year 3. At the end of this period it may be necessary to repeat the cycle. Herbage analyses for Co should be the guide here. Where soil Mn levels are in excess of about 400 mg/kg, the application of cobalt sulphate at 4 kg/ha will probably be effective for one season at most. In these circumstances direct supplementation of animals either by oral dosing, cobalt bullet administration, addition of cobalt to the water supply, use of cobaltized mineral licks or injection with Vitamin B12 must be considered.

Soil analyses for Co are of little value unless accompanied by parallel analyses for manganese. Only when both analyses are available can one predict the likely herbage content or the benefits which might accrue from applied cobalt.