Copper is essential for plants, animals and humans. In Ireland , cereal crops are frequently affected by shortage but only rarely does grass respond to copper supplementation. It is an extremely important element in livestock production.

Areas of low copper status are shown in Fig. 1. Data (Fleming and Parle, 1986) from 10,500 soil samples (0-10 cm depth) were used in compiling this figure. These were obtained by soil extraction with 0.5 M ethylenediaminetetraacetic acid (EDTA). This reagent provides useful correlations between the amounts of Cu extracted and responses in crops such as cereals.

The low copper areas are largely associated with soils formed from granite and sandstone. These rocks are inherently low in copper. Where podzolization occurs, e.g. in many hill land areas, this contributes to further depletion of Cu from surface soil horizons. Figure 1 underestimates the extent of low Cu soils as no samples were available from some midland peats and from west Galway , north-west Mayo, mid and west Donegal and south Kerry. The figure is based on surface soil samples received from agricultural advisers over a ten-year period from 1976 to 1986. The percentage distribution of three categories is shown in Fig. 2 (Fleming and Parle, 1986). Approximately 8 percent of values are in the category where responses to applied copper in cereals might reasonably be expected. The first and second categories taken together - amounting to some 30 per cent of the total - represent values where copper contents of herbage, though generally adequate for grass growth, may not supply sufficient Cu to herbage to satisfy animal requirements. It must be emphasised that in relation to problems of Cu deficiency in animals, soil Cu figures, though useful, should not be seen as definitive. 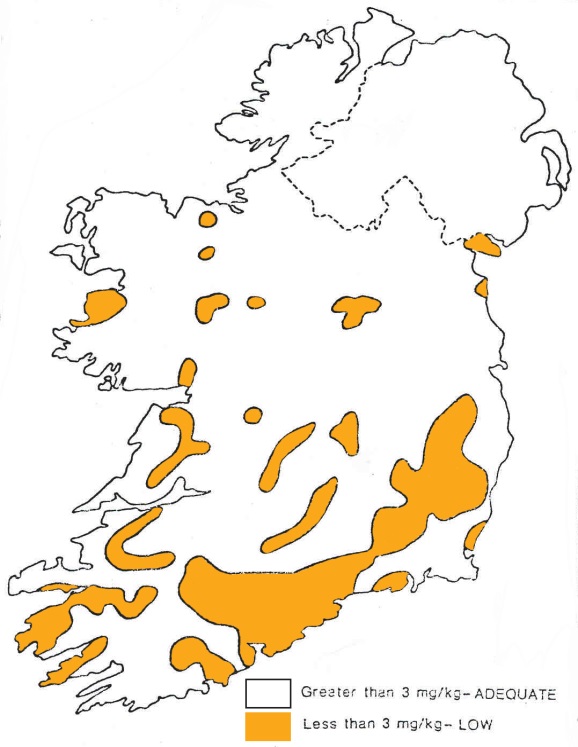 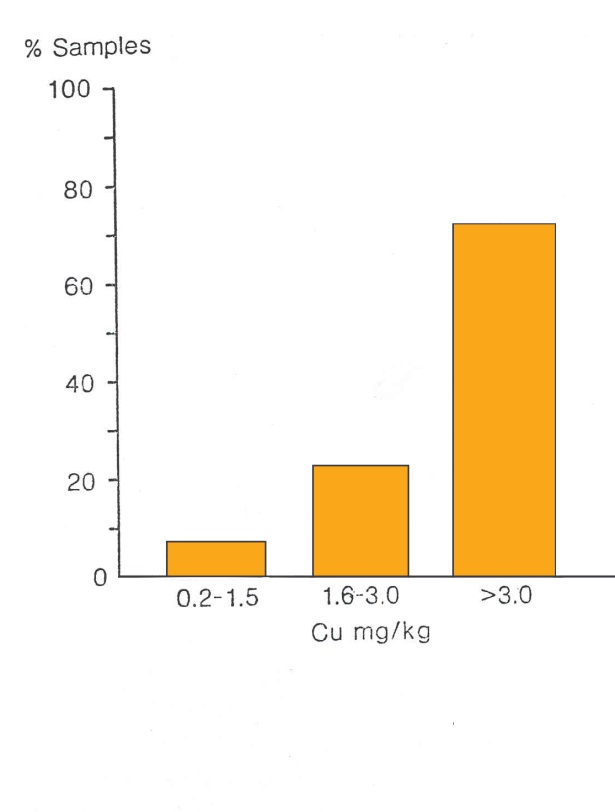 Liming reduces available soil Cu. The effect obviously varies between soils but generally it is not large and cannot be compared with, for instance, the effect of lime on manganese.

The subject of applying copper to land from slurries and sludges has received a great deal of attention in recent years and an E.E.C. Directive on the use of sewage sludge to land has been drawn up. Copper applied in this way - via soil ingestion - can be hazardous to animals, particularly sheep, unless due precautions are taken.

Copper (Cu) is essential for both plants and animals. Copper concentrations in soils are greatly affected by soil parent material. Soil parent materials derived from such as sandstones and quartzites are inherently low in Cu. Soil derived from acid igneous rocks as typified by granites and rhyolites generally contain less Cu than more basic rocks like gabbros and basalts. Whereas soils derived from shales vary appreciably in their Cu content, arenaceous (sandy) shales are much lower in Cu than argillaceous (clayey) shales. Copper contents of limestone depend on the degree of purity of the rock - the purer the limestone the lower the Cu content. Peats generally have a very low Cu status and require the addition of Cu as normal fertiliser practice. Where leaching and podzolization have occurred copper is frequently lost from surface soil horizons. Peaty podzols formed from parent materials low in copper often support pastures with inadequate levels of Cu for optimum animal production.

The Cu content of Irish soils is usually measured by an extraction technique using EDTA. This extractant is widely used for assessing the soil copper availability from both an agricultural and an environmental point of view Clayton and Tiller (1979). Brogan, Fleming and Byrne (1973) found that in Irish pasture soils EDTA extractable Cu ranged from 1.3 - 44.4 mg/kg with a mean value of 7. 9 mg/kg. In a survey of over 10,000 mineral soil samples Parle and Fleming (1985) obtained a mean value of 6.0 mg/kg in the range 0.2-172 mg/kg. This survey, which was performed on a county basis was also used to generate Fig. 1 (page 7) and delineates areas with low soil Cu values, i.e. <3.0 mg/kg. County values are given here (Table 1) for a subsequent survey (Coulter et al., 1999) and reports mean values for soils received for analysis at Johnstown Castle over a period of 10 years before 1998. A value indicative of adequacy varies depending on whether crop or animal requirements are being investigated. Generally, values of less than 1.5 mg/kg EDTA extractable Cu are insufficient for cereal crops. The exact requirement for grass growth is uncertain, but it is important to realise that though a soil may have sufficient Cu reserves for healthy pasture growth, the levels in the pasture itself may not be adequate for animal needs. Soil values of less than 3 mg/kg Cu are regarded with suspicion in the latter respect. Recommended advisory practice in Scotland is to apply copper to arable and pasture soils when the levels of EDTA-extractable Cu are less than 1 mg/kg and 3 mg/kg, respectively (Berrow and Reeves, 1985).

The levels of Cu in pastures generally vary from 2 to 15 mg/kg, with the range in grasses being much narrower than that in clovers. Lowest values are found in pastures on peatland and on mineral soils formed from such parent materials as sandstones, quartzites and granites. Reclaimed hill-land soils frequently support pastures of low copper status consequent on leaching, podzolization and peat formation.

On mineral soils copper is rarely limiting to the point where actual grass production is affected but on some peats this can occur. Grennan (1966) obtained yield increases in both grass and clover following the application of copper sulphate to Irish peat. These increases were generally greater in the clover component of the sward but in the first year increases in grass production of up to 17 per cent were recorded.

The copper content of pasture is a result of the interplay of a variety of factors including soil parent material, herbage species, stage of maturity, season and nitrogen application.

Variations in uptake by different grass species can be appreciable. Generally Yorkshire Fog (Holcus lanatus), rough stalked meadow grass (Poa trivialis) and Agrostis spp contain higher levels of Cu than does ryegrass (Lolium perenne). Ryegrasses, in general, are not particularly rich in Cu and the ploughing up of old pastures and reseeding with ryegrass mixtures can result in a general lowering of the Cu status of the sward. This will be particularly so if the original pasture contained clover.

Apart from species, stage of growth (Table 2) and season can affect the Cu content of pastures (Fleming, 1965). Assuming an adequate soil supply, the level of Cu in mature herbage is much lower than in young leafy material. In perennial ryegrass Fleming and Murphy (1968) noted a sharp decrease in Cu content as the grass matured, the levels at senescence being approximately half those at the young leaf stage. In perennial ryegrass cut at approximately the same stage of growth and at several times during the growing season Cu contents ranged from 7 to 15 mg/kg. A similar seasonal pattern was reported by Hemmingway (1962) over the course of four silage cuts but nitrogen application affected actual levels. In the absence of nitrogen (N) Cu levels ranged from 4.5 to 8 mg/kg whereas, in pasture receiving N, Cu ranged from 2 to 4 mg/kg between first and last harvests.

In grazed swards the rise in Cu levels with season does not appear to be as sharp. Here seasonal samples will inevitably contain material at different stages of growth and of changing botanical composition. McGrath (private communication) has noted a slight rise in the Cu content of grazed swards with advance in season but evidence of a decrease in Cu levels in the July-August period was apparent. In general the effect of season is less predictable in grazed swards.

Conflicting results have been obtained on the influence of N on herbage Cu content. Where soil Cu levels are adequate, applications of N can enhance Cu uptake by stimulation of root development, but where soil Cu reserves are low herbage Cu contents will be depressed due to the dilution effect produced by the extra growth. The effect of N on Cu uptake by a ryegrass sward growing on a soil with adequate Cu levels is shown in Table 3 (Fleming et al., 1988). It is interesting to note that applications of N had a greater effect on Cu uptake then had application of copper.

The addition of lime as ground limestone results in a slight lowering of the Cu status of grasses. In mixed grass/clover swards and assuming an adequate Cu supply, its effect will usually be in the opposite direction insofar as after liming, an increase in the clover content of the pasture can occur. The higher Cu levels in clover will then result in an overall increase in pasture Cu levels.

Raising the copper status of pastures

Although the copper content of pasture is rarely low enough to affect grass growth, the level may sometimes be insufficient to meet the requirements of grazing animals. These requirements vary both with type and age of animal. Cattle require more Cu than sheep and the young bovine requires more than the older animal. For dairy cattle a Cu content of at least 10 mg/kg in herbage dry matter is necessary. In ryegrass pastures this level is frequently not attained.

The application of copper sulphate at sowing time is a reliable and effective method of raising the Cu status of pasture to an acceptable level and its effect is long term. A dressing of 20 kg/ha of copper sulphate is adequate. On established swards it may prove difficult to apply this rate without causing some scorching and half this amount will suffice, albeit for a shorter time. The effect of 20 kg/ha CuSO4, 5H2O on a newly sown pasture, cut three times during 7 subsequent growing seasons, is shown in Table 4 (Fleming, 1984).

Availability of copper to the animal
It has been estimated that Cu deficiency is the most frequently occurring of the micronutrient deficiencies worldwide (Mills, 1985). Recommended dietary allowances do not accurately relate to the animal’s copper requirements on all diets as the bio-availability of copper varies with differing diets and with molybdenum and sulphur contents of the diet (Price, 1989). The bio-availability of Cu from herbage can be less than 3 percent of the total Cu content, whereas the availability of Cu from silage and hay can be of the order to 3 and 7 percent, respectively (Suttle, 1983).

Soil ingestion is a significant factor influencing the Cu status of grazing animals. It would seem that ingested soil can contribute useful quantities of such micronutrients as cobalt, iodine and selenium (Healy, 1970, 1972), but in the case of copper, availability is reduced. Differences in the Cu status of herds grazing similar pastures may be accounted for in part, at least, by differences in stocking rate and thus in the degree of soil ingestion. The release of Fe from soil in the rumen can inhibit the absorption of Cu by the animal. Contamination of silages with soil, thereby raising their Fe content, can also reduce Cu bio-availability.

The major factors governing soil ingestion under Irish conditions have been identified as stocking rate and rainfall (McGrath et al., 1982). Soil type and herbage on offer appear to be of lesser importance. With regard to the availability of a particular micronutrient however, soil type can never be totally ignored.