Iodine is required by animals and humans but not by plants. Because of problems with goitre in humans, investigations into the iodine content of some Irish soils were conducted in the 1940's (Shee, 1940;O'Shea, 1946). Goitre was quite sevand Old Red Sandstone averaged 3.1 mg/kg I, whereas those from the Spiddal area of Co. Galway, where goitre was not known, averaged 40 mg/kg. In the case of the Galway soils seaweed had been freely used as fertiliser. Subsequent investigations (Anon, 1956) by the Iodine Education Bureau, in collaboration with veterinary practitioners, animal nutritionists and agricultural advisors led to some delineation of iodine deficient areas in Ireland (Fig. 1). The investigations involved the provision of iodized mineral supplements to stock on over three hundred Irish farms and observation of resultant effects on animal health and performance.ere in parts of south Co. Tipperary and here much research effort was concentrated. Soils from the area formed from limestone, 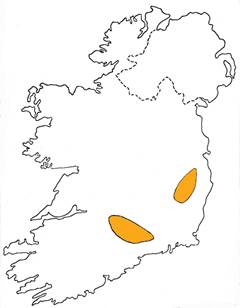 As iodine is readily leached from soils it is natural to focus on coarse-textured, freely-drained, soils as sources of low iodine. Such soils are frequently associated with glacial and fluvio-glacial deposits as may be found in morainic and outwash plain sands and gravels. It is interesting and probably not coincidental that the areas designated as low in iodine by Shee (1940) and O'Shea (1946) lie on the end moraine of the Midlandlian glaciation (Fig.1). Examination of glacial deposit patterns could prove very useful in endeavouring to locate other low iodine soils in Ireland . Where counties have been soil surveyed, information is obviously more precise and the task of identifying low iodine areas should be that much easier.

It is remarkable that since the studies of the 1940s little investigation of iodine in Irish soils has been undertaken. A partial explanation is the fact that human and animal goitre can be prevented by supplying iodine. In practice this is achieved by the use of iodized table salt by humans and by providing iodized salt licks and mineral mixes for animals.

Soil iodine and distance from the sea

It is generally recognised that atmospheric precipitation is the most important source of soil iodine (Fuge and Johnson, 1986). Because of its solubility, iodine is relatively enriched in both surface and sea waters and onshore winds carrying sea spray contribute to the iodine content of soils near coasts. Areas of iodine deficiency are classically associated with areas remote from the sea but, whereas this may hold for large continental masses,it is not necessarily so for relatively small islands such as Ireland . Fleming (1980) has drawn attention to the importance of soil type in any assessment of iodine in soils. Levels of I in heavy-textured inland soils can be higher than those in light-textured soils closer to the sea. A recent study (McGrath and Fleming, 1988) has borne this out (Table 1).

Soil analysis is not a good guide in the assessment of plant-available iodine. Herbage analysis is preferable and even here there may be considerable variation due to soil contamination, plant species and season. The latter may reflect changing amounts of atmospherically-deposited iodine. In the absence of a satisfactory test for plant - available iodine, soil analysis serves as a rough guide in indicating areas of low pasture iodine.

Iodine (I) is not an essential element for plant growth, but is required by humans and animals, and is a component of the thyroid hormones. Iodine deficiency is a primary cause of goitre. The term “goitre” it is suggested can be replaced by the term “iodine-deficiency disorders” as goitre does not adequately represent the current knowledge on the number of conditions occurring as the results of I deficiency (Hetzel, 1983).

The geochemistry of iodine is related to its association with biological processes. The I content of soil varies to a large degree, and, in general, soils are richer in I than are their parent rocks. The amount of I in soils depends greatly on their silt and clay content, the organic matter status and on their location. Atmospheric precipitation is by far the most important source of soil iodine (Fuge and Johnson, 1986). A considerable amount of I enters the atmosphere from the oceans and from the burning of fossil fuels. It is estimated that annually up to 400,000 tonnes of I escapes from the surface of the oceans (quoted by Hetzel and Maberly, 1986). The I content of soils near the sea have been shown to be higher than inland soils. This effect is more likely to be seen with the larger land masses, and is not apparent in Ireland (McGrath and Fleming, 1988) or in Britain where Whitehead (1973) found no significant correlation between I and distance from the sea. Some coastal soils, however, can have elevated I values resulting from the use of seaweeds as fertiliser source.

Areas in south Tipperary , west Wicklow and south Antrim have been associated with I deficiency in humans (Anon, 1956).

The I content of pasture herbage, in general, falls within the range 0.10-0.35 mg/kg, with the higher values reflecting the amount of clover in the sward. The I content of herbage bears little relationship to the soil content (McGrath and Fleming, 1988). Butler and Johnson (1957) reviewed the concentrations of I in New Zealand grasses and noted that the soil and seasonal effects were subordinate to variational differences.

McGrath and Fleming (1988) obtained no effect from the application of N and lime on the I content of herbage on two Co. Wexford soils, whereas Hartmans (1974) obtained decreases in I content of herbage with the application of calcium ammonium sulphate caused by “dilution” as plant growth rate outstripped the uptake of I from the soil. There appears to be little effect of P and K fertilisation on the uptake of iodine. Farmyard manure has been shown to reduce I levels by more than tenfold irrespective of the form of I applied to the soil (Whitehead, 1975). It would be of interest to know what effect cattle slurry might have on the uptake of iodine.