Zinc is required by plants, animals and humans. Studies on the zinc content of Irish soils commenced only recently as, in the past, it seemed that zinc deficiency of crops was not a problem here. Some years ago zinc deficiency in onions was reported on peatland (Gallagher, 1969) but this occurred on a site which in the previous year had been heavily fertilised with phosphorus for a celery crop. Phosphorus is an antagonist of zinc in plant nutrition and in areas of the world where zinc-sensitive crops such as maize are grown, this fact is well recognised. In the absence therefore of crop or animal disorders suggestive of zinc deficiency, the element received little attention. In 1984 however, reports on an unidentified disorder in cereals in Co. Louth emerged, and following some preliminary investigations, zinc deficiency was identified as a possible causative factor. Full-scale field trials confirmed this (Mac Naeidhe et al., 1986). 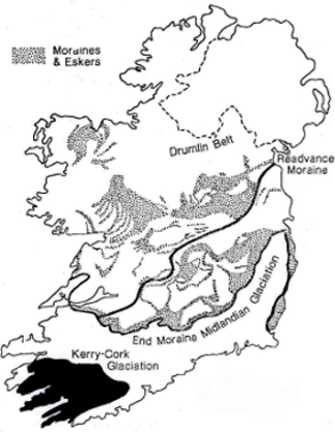 Zinc status of Irish soils
The cereal problem mentioned above occurred principally on hillsides on relatively stony soils, and closer inspection of the area revealed that the soils coincided with morainic deposits associated with the Midlandian glaciation. These particular deposits form part of the (Kells) Re-advance Moraine (Fig. 1). Recognition of this fact provides a directional approach to the search for other possible areas of low-zinc soils.

Examination (Mac Naeidhe et al., 1987) of some 500 soils (0-10 cm depth) from countrywide sources has revealed a number of areas small in size and rather well scattered (Fig. 2). The largest area occurs in Louth and north Meath. Some of the remaining areas are certainly associated with soils formed from glacial and fluvio-glaclal deposits and in this respect the comparison between Figs. 1 and 2 is interesting. More intensive soil sampling will be necessary before the true extent of the association between low-Zn soils and fluvio-glacial deposits can be established. Such an investigation will inevitably be easier in those counties for which a soil survey has been completed.

Zinc availability in soils
The availability of Zn in soils to plants is reduced by liming. Zinc is absorbed by iron and manganese minerals in soils and also by certain clay minerals. The intensity of absorption by iron minerals increases as pH rises and this in part accounts for its reduced availability.

Under conditions of high soil moisture the availability of zinc is increased. Pore spaces which are normally filled with air are now filled with water giving rise to a scarcity of oxygen. Under such reducing conditions the stability of zinc-binding minerals becomes less.

Potentially zinc deficient soils can be defined as follows;

Frequency distribution of Zn in Irish soils
The frequency distribution of Zn in Irish soils based on the analysis of the 500 surface soils (0-10 cm depth) is shown in Fig.10. Diethylenetriaminepentaacetic acid (DTPA), the extractant used, is a well-recognised one. Values of 1 mg/kg and less are indicative of deficiency in sensitive crops. Approximately 15 percent of soils fall into the risk area. Obviously more effort needs to be concentrated in tillage areas where cereals will form part of a rotation. 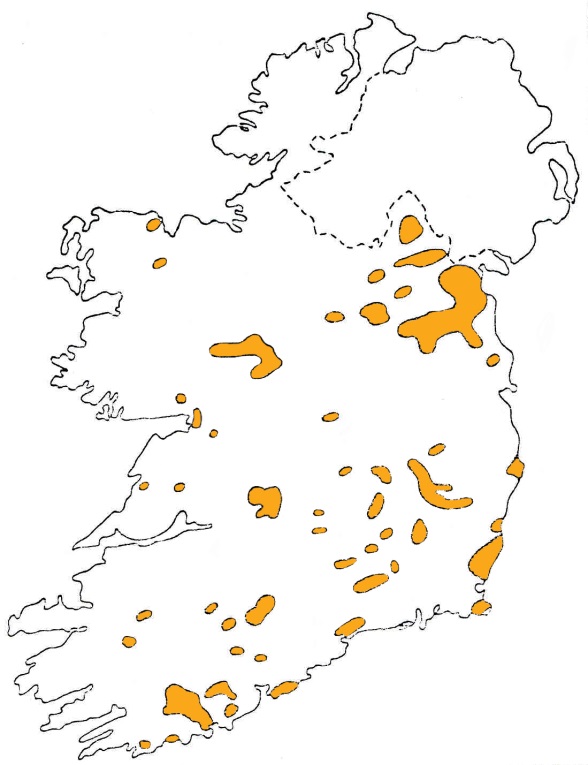 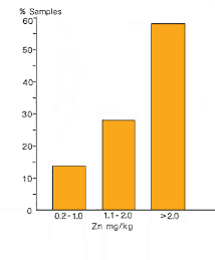 Zinc (Zn) is an essential element for plants, animals and humans. It is a component of many enzymes and it functions as a specific activator in numerous biological reactions.

In igneous rocks zinc substitutes for both ferrous iron and for magnesium and therefore it occurs in greater quantities in the more basic rocks. Typical analyses are as follows; basalts 100 mg/kg, diorites and andesites (intermediate basicity) 70 mg/kg, and granites (acidic) 50 mg/kg. In sedimentary rocks it is more abundant in shales than in sandstones or limestone, 90 and 20 mg/kg Zn respectively being typical contents. Zinc exhibits a chalcophylic nature and is frequently found as the sulphide - sphalerite (ZnS). It may also occur as the carbonate (ZnCO3) e.g., in the mineral smithsonite. Zinc from sulphide minerals goes into solution more easily than it does from silicate minerals and during soil formation may be absorbed on to clays, hydrous oxides of aluminium, iron and manganese, and on to organic matter. Montmorillonite is capable of absorbing quite large amounts of zinc.

The concentrations of Zn in soils are a reflection of the composition of the parent material from which the particular soil is derived. In world soils Zn concentrations range from 1.5 to 2000 mg/kg with a mean value of 59.8 mg/kg (Ure and Berrow, 1982). Zinc values for non-polluted Irish agricultural soils fall within the range 10-200 mg/kg, whereas the EDTA extractable values are generally in the range 2-15 mg/kg with a mean value of the order of 6.5 mg/kg. The distribution of EDTA extractable Zn values below 2.0 mg/kg in Irish soils are shown in Fig. 3 and such values must be considered to be suspect. Inherently low levels of Zn can be expected in sandy soils and in coarse-textured glacial deposits. Deficiency of Zn in susceptible crops can be anticipated on such soils.

Some factors affecting zinc availability
Zinc mainly occurs in soil on surfaces of clays, hydrous oxides and organic matter, rather than the soil solution (Armour et al., 1990) but is taken up by plants from soil solution.

The availability of soil Zn to plants is less under high pH conditions than under acid conditions and Zn is particularly unavailable when free calcium carbonate is present in the soil. However, plant species may vary in their response to soil pH as shown by Williams (1977) who by decreasing soil pH increased the uptake of Zn by red clover but not that of oats grown on the same soil.

Soil microbial activity can release Zn from relatively unavailable sources and it is known that mycorrhizal plants can absorb more Zn than uninfected plants.

The enhancement of Zn requirements by P has been produced in plants grown in sand and water culture experiments, with very high levels of P supply (Parker, 1993). Lonergan and Webb (1993) stated that it is likely that “P enhanced Zn requirements” are an artefact of glasshouse trials and have little relevance in crop production. However, Zn deficiency has been reported in Ireland in onions grown on sphagnum peat with a high P content, but there was no deficiency at lower P levels (Gallagher, 1969). The levels of Zn in the peat were, no doubt low, and the deficiency may have been a reflection of a dilution effect brought about by a response to phosphorus.

The Zn requirements of grazing animals are poorly understood and recent data suggest that requirements were formerly over-estimated (White, 1993). A Zn value of 40 mg/kg has been proposed for the diets of calves and dairy cows (NRC, 1988). The typical range for Zn in non-polluted Irish pasture is 20-60 mg/kg with a mean value of about 30 mg/kg, with 25 percent of herbage samples analysed at Johnstown Castle falling below 25 mg/kg the minimum requirement suggested by Rogers et al. (1989) for Irish dairy cattle. In a study of the trace element content of Irish stud farm pastures Parle et al. (1995) found that 30 percent of herbage samples had values of <25 mg/kg on a national basis: on a county basis 80 percent of samples from Co. Tipperary had herbage Zn values of <25 mg/kg.

There appears to be little variation in levels of Zn in Irish pasture herbage over the grazing season, April to October.

MacNaeidhe and Fleming (1988) reported a response in spring cereals to foliar sprays of Zn in an area in north-east Co. Louth. The soils where the response was obtained are formed from material deposited by the drumlin re-advance moraine. Other areas in the country with soils derived from glacial and fluvio-glacial deposit have also been identified as being low in zinc. Such areas have EDTA extractable values of <2.5 mg/kg Zn.