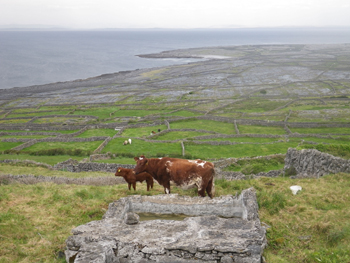 The Irish countryside is rich in ancient archaeological settlements and ritual monuments. These are the result of generations of farming communities who have made their living from the land. Most townlands contain at least one ancient monument, many contain several. Some are constructed of earth or stone and may appear as banks of earth or humps and hollows on the ground surface, others are buried and have to be reveals by aerial photography or by excavation. A series of maps called the Record of Monuments and Places has been produced for each county in Ireland. All archaeological monuments are protected under the National Monuments Acts 1930 to 1994.

Traditional buildings enrich the Irish countryside. Old farm buildings provide a direct link to the farming methods of previous generations. The materials and craftsmanship displayed in the buildings, gates and walls are a testament to the ingenuity of our ancestors in making the most of the resources available to them. The traditions followed were founded on experience; of the climate; the locality and its resources. Thus these buildings appear very much in harmony with their local setting. Regional differences in walling or flooring materials used in buildings are echoed in features of the farmed landscape.

The landscape of Ireland is predominantly an agricultural one, and farmers have been its guardians. The most visible signs of ancient farming on the landscape, dating from the Early Christian Period (500-1200 AD), are the many thousand ringforts whose circular enclosures were essentially protected farmyards. Most of the lowland landscape was laid out in the eighteenth and nineteenth centuries when landlords forced tenants to enclose common land by establishing earth banks, stone walls and hedgerows.  Enclosure of millions of hectares of land created the ‘patchwork-quilt’ appearance of the present rural landscape. Agriculture always has and will continue to mould the landscape. The landscape as we know it needs farming activity.