Nitrous oxide (N2O) is a powerful GHG with a global warming potential 265 times greater than carbon dioxide (CO2) and has a lifespan of 100 years. Over the last 150 years, atmospheric concentrations of N2O have reached unprecedented levels, increasing from 270 parts perbillion (ppb) to 335 ppb. View Global N2O Levels

Agriculture produces 90% of N2O emissions in Ireland.The main contributions are:

N2O is produced in the soil through microbial processes which utilize nitrogen (N) from the above agricultural practices. The rate of N lost from pastures in the form of N2O is stimulated by environmental conditions which favour microbial activity such as:

Where multiple factors which promote N2O  production exist in one space, hotspots of N2O occur where the potential for N2O losses greatly increases.

To mitigate against N2O emissions in agricultural systems potential N2O hotspots must first be indentified and treat these areas accordingly. Potential hotspots of N2O  within agricultural landscapes could be water-trough areas and gateways i.e spaces that cows may spend more time congregating. Reducing the number of gateways per paddock and/or locating gateways on well-drained soils could reduce N2O emissions.

By actively avoiding spreading N fertilizer and farm effluent/manure near potential hotspots of N2O such as gateways or water troughs, farmers can limit high N losses from managed pastures. Where possible, nitrification inhibitors and protected urea should be applied to gateway areas and other potential hotspot areas, to reduce N loss and the availability of N for N2O production.

Protected urea is urea which has been treated with a urease inhibitor which prevents the conversion of urea to ammonium. Studies investigating the performance of protected urea versus calcium ammonium nitrate (CAN) have shown the same yield output with lower N2O emissions (Fig. 1) (Forrestal et al., 2017). 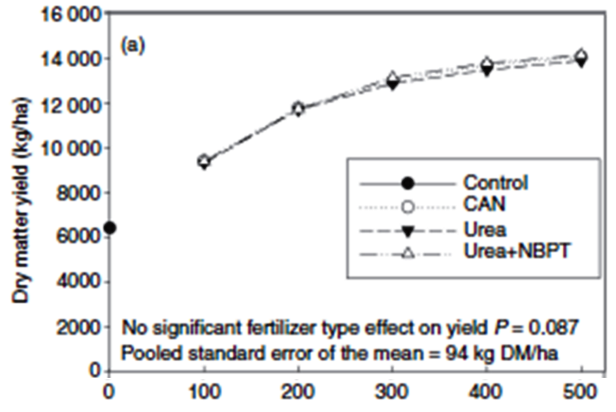 An alternative to synthetic fertilizers is the use of legume crops. Legumes contain symbiotic rhizobia bacteria that fix N from the air in the soil and release that N slowly, meaning plants can optimize the N inputs more effectively for growth. By incorporating legumes into cropping systems, farmers can reduce loading rates of N fertilizer applications and therefore lower N2O-N losses.

The Nitrates Directive (91/676/ECC) is primarily concerned with improving water quality which is complimented by a reduction in atmospheric N2O emissions (Leahy et al., 2004). Each EU member state is required to create National Nitrates Action Programmes (NAPS) which highlight the rules for the management and application of livestock manures and other fertilizers. Irelands third NAP came to an end in 2017 whereby farmers were limited to using 170 kg N per hectare per year from livestock manure and the last date for spreading synthetic fertilizers is the 14th September.