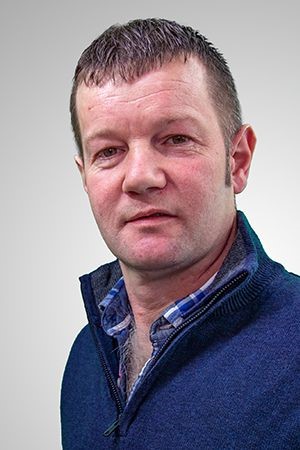 Situated just outside Ballymacarbry, Co. Waterford, Richard Long operates a calf to beef system where all animals are carried to slaughter under 24 months of age.

A participant in the Teagasc’s Signpost and Dairy-Beef 500 programmes, the Waterford native is implementing technologies to reduce the overall carbon footprint of his beef farming enterprise, while at the same time improving profitability.

A key focus on the farm has been to reduce the age of slaughter. This not only has benefits in terms of greenhouse gas emissions – particularly methane – but it has positive consequences in terms of profitability.

To shed some light on the progress been made to date, calves purchased on the farm in the spring of 2016 had an average slaughter age of 26 months for steers and 23.7 months for heifers, producing respective carcass weights of 287kg and 250kg.

By placing an increased focus on animal performance, which is being monitored by regular on-farm weighing, the age of slaughter for steers and heifers born in the spring of 2019 has reduced substantially. Of these animals, an average age of slaughter of 22.8 months was recorded for the steers, while the heifer age of slaughter reduced back to 22.1 months.

Although a reduction in the age of slaughter nationally will be one of the key tools required to meet the challenges facing Irish agriculture in terms of climate change over the coming years, it has to be achieved without having negative impacts on carcass performance.

Richard’s farm is an exemplary example of just this; steer and heifer slaughter age has reduced by 3.2 months and 1.6 months respectively between the 2016 and 2019 calf crops, while the carcass weights produced have increased by 11kg for steers and 13kg for heifers.

With all calves being sourced from his brothers’ dairy farm in Co. Tipperary, Richard, along with Liam and Mike, have implemented a breeding strategy that allows for sires with increased carcass weight and conformation scores to be used without having negative repercussions on the calving, fertility or milking performance of the dairy herd.

This breeding policy has seen an increased usage in continental sires such as Aubrac, Belgian Blue, Limousin and Charolais, along with early-maturing sires, which will improve animal production traits at the point of sale in the future.

Along with the focus on animal performance, improvements in soil fertility and grassland management will also be targeted. Soil fertility is challenging on the farm located in the Nire and an approach targeting the correction of soil pH, P and K levels will become a main target. The use of LESS slurry spreading techniques has also been adopted and protected urea will become the main source of straight artificial nitrogen to be used on the farm over the coming years.

Clover will also be incorporated into swards once soil fertility has been improved and weekly grass measuring and budgeting will continue. The focus on making excellent quality silage will also not weaver, with a target of producing a winter feedstuff with a dry matter digestibility value of 72 becoming an annual aim.

Unlike many farms in the southern half of the country, we’ve been relatively unaffected by the drought so far. Sometimes the hills have their benefits; the rain kept coming here – albeit at low volumes - at times when other areas remained dry. However, things have slowed down considerably over the past week or two and I’m hoping that the rain that’s promised at the time of writing materialises.

Growth rates over the last week have been just hovering above demand, which means we have been able to hold the average farm cover on the farm but it has made it very difficult to build covers into the autumn. Ideally, I’d like to be in a position now where I could be increasing average farm cover to allow the grazing season for the weanlings to be extended until late October / early November – weather depending.

On the finishing front, 38 heifers and 12 steers – mainly all early-maturing types - were started on concentrate feeding in the middle of August.  Currently being offered 4kg/head/day of a high cereal finishing ration, the target is to have these animals moved off farm by the middle of October at the latest.

At that point, the remainder of the stores will be housed and finished indoors on grass silage and concentrates. The feeding rate of concentrates over the winter months will depend largely on the quality of silage available which will be determined from the results of silage samples taken and delivered to the lab last week.

In terms of this year’s calves, they are currently split into two groups – a stronger, earlier-born group and a later, smaller group. Both groups of calves are still receiving concentrates and will do so until housing. However, the bigger group is only receiving 0.5kg/head/day, while the strong group are on 1kg/head/day.

September will hopeful provide an opportunity to apply lime and I’m targeting spreading 100t. Improving soil fertility here is providing a slow burner. At the commencement of the Teagasc Green Acres Programme, the predecessor to Teagasc’s DairyBeef 500 Campaign, soil testing indicated that 0% of the farm was at the optimum level for pH and just 10% was at index 3. Through an intensive liming and fertility programme, which is still ongoing today, this is slowly improving. 50% of the farmed area is now at either index 3 or 4 for P. 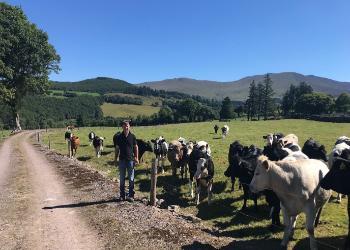 Away from the activities of farming, I will be hosting a farm walk as part of Teagasc’s DairyBeef 500 Campaign this Thursday, September 8th. On the day, we will be looking at the changes made on the farm over recent years, with a particular focus on emissions targets, genetics, reducing the age of slaughter and health. The event will take place on the farm here in Ballymacarbry, Co. Waterford (Eircode: E91 VH67) at 3pm.

Last week, I hosted a group of students from Colegsirgar in Carmarthenshire, Wales, as part of a brief study tour of Ireland.

What was interesting is that the challenges Irish agriculture is facing in terms of our climate action targets are almost being mirrored a few hundred miles across the water in the south-west of Wales.

What was disheartening to hear, however, was how multinational companies are essentially swallowing up large areas of productive farm land and turning it into forest to enhance their green credentials. At the same time, farmers were facing into a scenario where a large chunk of their income – the basic payment scheme – will be ceased and were not able to compete in the acquisition of new lands, making the pathways into farming even more challenging for the next generation.

The Welsh parliament sanctioned its carbon reduction targets in March 2021, Ireland was eight months behind. Let’s just hope a similar practice does not become evident in Ireland over the coming years, where large corporations essentially use farmland as a means of improving their green image.

Now back to the world of farming – the main part of the topic of discussion on the evening. The changes that have occurred on the farm here were detailed to some of the next generation of Welsh farmers and agri-professionals. None of these were ground-breaking, but rather little tweaks that helped improve the efficiency and viability of the farm here.

A key focus has been placed on improving animal performance from the day the calf arrives right through to finish. And, by ensuring target weight gains have been achieved, we’ve seen the age of slaughter reduce significantly.

I was questioned on how this performance was achieved and there is not one massive area of change, but more so a plethora of tweaks or fine tunings that has allowed animals to finish earlier. Not only are we now purchasing a better quality calf – due to the maturing of my brothers’ dairy herd - but I’m buying an animal with improved genetics for beef production.

The nutrition of the animals has also improved with a greater focus now being placed on making better quality silage to reduce concentrate input over both the first and second winters, while a greater focus has been placed on managing the calf during the rearing period.

Although these changes are nice on paper, they wouldn’t have been worthwhile unless they left a return for the activities undertaken. Thankfully this has been the case, resulting in improved net margins. It’s all a matter of repeating the system that works and hopefully beef prices and rising farm input costs will balance to leave a margin at the end going forward.

Now that we have the back pathing out of the way, back to the focus of farming. The last of the calves are currently being weaned off milk, while this year’s silage group will hopefully be saved and in the pit by the time this is published. Grass growth has been exceptionally strong here over the past months, so an additional five paddocks will also be taken out for surplus bales.

The month of May marks the time here when things really start to kick into gear. Not only are calves turned out to grass, but we’ll be busy in the fields saving next winter’s feed.

The calf rearing season has been relatively straightforward and is now all but complete, with the exception of a couple of late arrivals. As always, there have been one or two setbacks but that’s to be expected when you’re working with livestock.

The latter weeks of April and the early weeks of May traditionally mark the period when calves are turned out to pasture to commence their lives as a grazing animal. As always, the aim for these animals is to gain 0.7-0.8kg/head/day between now and when the shed doors are closed behind them next winter.

To make the transition from an indoor animal, dependent on milk, to a grazing animal as straightforward as possible, there’s a couple of steps I follow ever year.

Firstly calves are allowed settle for a week or two after being weaned before being turned out to grass. This period is critical as it allows me to assess if a calf is correctly weaned and consuming adequate quantities of meal before venturing outdoors.

And sheltered paddocks closest to the yard are generally their first point of call, once the weather settles and no changeable weather is forecast.

Once outdoors, meal feeding will continue at a rate of 1kg/head/day for 4-6 weeks for the earlier-born calves, while the late March-born calves will remain on meals for the summer.

This not only avoids a sudden and sharp change to the diet, but it allows me to see if every calf is adapting to outdoor life. If a calf is slow to come to the trough in the morning, it’s a sure sign there’s something amiss. Calves on the farm here are also offered hay indoors and this will continue for a couple of weeks post turnout to ensure that they settle in on their green diet.

Along with calves taking the change of scenario in their stride, it’s important to keep one eye on health. Coccidiosis has been a problem in calves on the farm here in previous years and so treatment for this ailment will more than likely be needed this year, along with the control of stomach and lungworms.

From an animal performance point of view, it’s vital that we avoid setbacks from any of these three parasites, as it is next to impossible to achieve the targeted levels of weight gain if a burden is present.

Away from the exploits of calves learning to be grazing animals, the other main job on the list for the month is to complete the silage harvest.

The plan is to have it all wrapped up and covered by the 20th of May. It’s in the lap of the gods now and all it has to do is grow. All we can hope for is the weather comes in our favour and we’ll have the pit covered before it rains. All going to plan, we’ll have a 72-74DMD silage to feed next winter.