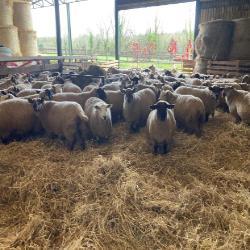 Brian Keane farms 96 hectares in conjunction with his father John, Uncle Aidan, brother Eoin and fiancé Blathnáid. The farm is situated in Davidstown near Enniscorthy,Co. Wexford and is a sheep, cattle and tillage farm with approximately five hectares of commercial forestry and a further 10 hectares of land taken up by disused quarries, groves, rivers, streams and lanes.

The 81 hectares of productive farmland is split roughly 50:50 between grassland and tillage. The tillage area is dedicated to winter wheat, winter barley, spring malting barley and beans. And with the exception of the beans all the crops have been harvested at the time of writing. Apart from some machinery issues harvest went well on the farm and overall yields were goods. All of the stubble ground apart from those identified for planting winter crops have been sown with cover crops. Brian has split up the sown area between forage rape and hybrid brassica and the plan will be to graze finishing lambs, dry hoggets and prior to housing for lambing the in lamb ewes on these crops. The yield of crops will potentially be lower than anticipated this year though in getting going due to dry weather being experienced in this part of the country.

Lambs are being checked regularly and drafted for the factory as they are ready. The lambs are divided into 3 groups with the ewes lambs separated from the rams. Also a ‘finishing group’ has been set up on the farm heavier lambs (>38kg) being offered 500g/hd/day of concentrates at grass to try and increase drafting rates and reduce grazing pressure as grass supplies are very tight due to the soil moisture deficits in the area.  The lighter lambs will remain on grass only for now and will be drafted into the finishing group as they reach the weight targets.

The ewe flock has been assessed ahead of mating in October and cull ewes have been removed. Brian has been marking and recording culls throughout the year and from the remaining ewes any thin ewes have been marked and are been given preferentially treatment. Any of these ewes that fail to recover body condition will be culled prior to mating. The ram team has also been assessed ahead of mating and new rams being purchased are being bought on a combination of breed and being physically correct but also using the Sheep Ireland breeding indexes to select high genetic merit rams.