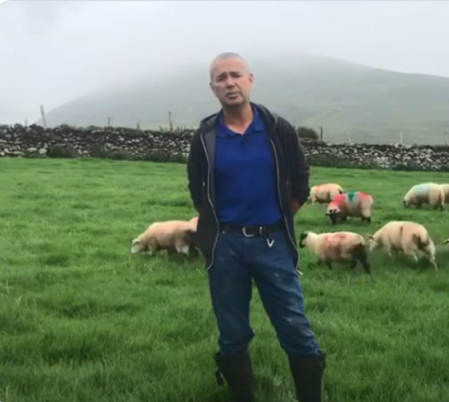 John Joe is a hill sheep farmer based west of Dingle and farms with his wife Karen and their five children Shannon, Aoife, Colm, Aodhán and Tadhg. The farm consists of approximately 12ha of improved ‘’green’’ ground and a share of approximately 80ha of open commonage on Mount Brandon along with a half share, 11ha of an enclosed section of rough ground at the base of the commonage.

John Joe started lambing on the 10th of April with all the ewes lambing outdoors on the enclosed rough ground where they were being supplemented with hay and concentrates prior to lambing. Once lambed the ewe and her lambs are brought indoors into individual pens for 24 hours. This allows ewes and lambs to bond and ensure the lambs get sufficient colostrum and the lambing data from both the ewes and lambs is recorded. This data along with lamb weights recorded during the year is helping John Joe identify poorer performing ewes in the flock and track lamb performance to try identify any causes of flock performance issues.

A lot of work has been put into improving the green ground in recent years with soil fertility issues being addressed. Some areas have been reseeded and a big emphasis was put on improving grazing infrastructure. This has allowed John Joe to increase the amount of grass he is able to grow. A big part of this has been using temporary grazing divisions in the spring to allow for shorter residency periods, also grouping ewes and lambs up quickly into larger grazing groups once turned out.

This green ground grazed after lambing was closed up in rotation last autumn and ewes returned to the hill after mating to allow the ground rest during the winter months. The first round of fertiliser was applied to this ground in mid-March with 15 units/ac of nitrogen applied, there was an opening cover of 850kg DM/Ha when ewes and lambs were being turned out to grass in April.

Getting ewes back to hill is vitally important for the sustainability of hill farming systems. This has been challenging for John Joe in recent years as improvements in grass growth and supply on the green ground have happened quicker than ewe numbers have been able to increase. This has meant John Joe has had to hold ewes and lambs off the hill for longer than desired in recent years. This keeps grass supplies under control but increasing hill ewe numbers and the plan to establish a small, prolific lowland flock next year will help address this issue.