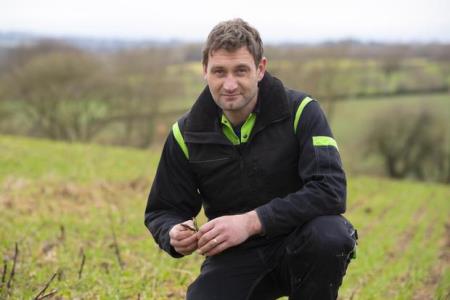 Don is a tillage farmer from Enniscorthy, Co Wexford who farms collaboratively with his uncle James Somers sharing both machinery and labour resources. (photo Patrick Browne)

Crops are established on the farm via non inversion with a tined cultivator with a small area of winter barley direct drilled in autumn 2021 autumn.

Crops grown on the farm include:

Previous soil samples taken in the years 2017 and 2019 show soil fertility on the farm to be good.  On average results across the farm show soil pH to be 6.6, soil phosphorus to be in the higher end of index 2 and soil potassium to be index 3. Winter 2021/2022 has seen the farm soil sampled with a much more targeted soil sampling approach using soil variability, combine yield map data and an average soil sample area of 2 hectares to identify potential soil fertility variability within fields.

Organic manures such as chicken litter, dairy sludge and farmyard manure are imported to both offset the use of inorganic fertilisers and improve soil health. Organic manures will be used on all the spring barley drilled this coming spring.

Winter oilseed rape was drilled last week but it will require rainfall to emerge. As in 2021 earlier drilling will increase the likelihood of a large canopy next spring facilitating the use of lower nitrogen application rates and significant input savings.

All land destined for spring crops has been drilled with a cover crop mix of phacelia, vetch, crimson clover and berseem clover. I have avoided brassicas species within the cover crop mix to prevent the build up of club root in the soil as oilseed rape features strongly within my crop rotation. Considering the weather during the summer, soils should have high levels of residual nitrogen, this combined with early drilled cover crops should produce valuable green covers and good nitrogen uptakes over the coming weeks and months.

I have no plan to change my rotation in light of the cost of chemical fertiliser. I do plan to use organic manures where possible to mitigate against the cost of chemical fertiliser. I chopped additional straw outside of the straw incorporation measure considering that the demand for straw was poor and the nutrient value of straw is significant with current chemical fertiliser prices. I am hesitant to forward sell grain currently but once I have completed drilling this autumn I will consider forward selling grain to reduce my exposure to high input prices and risk. The cost of producing a ton of grain in the coming year will be significantly higher and this may be determined prior to making any decision to sell or not to sell.

I plan to apply for ACRES the new environmental scheme administered by the Department of Agriculture Food and the Marine. My establishment system is min till and I cover crop all lands that will be spring cropped so I will choose both options in the scheme. I am also interested in the hedgerow and tree planting options which would obtain me the maximum payment within the scheme.

To date has a lot of field operations is complete for the main crops on the farm.  The wet and windy weather conditions in late May have favoured the utilisation of organic manures by spring crops.  Crops have a good colour indicating a good release of manure N earlier in the season due to the moist soil conditions.  In other years gone by the organic manure N release has been later due to dry conditions therefore impacting on grain proteins especially for quality crops such as malting barley.

Winter oilseed rape crops are looking very good overall with all field work complete.  There is some club root present which is been put down to growing short term brassica type cover crops in the rotation.  My winter wheat is looking good and the last application of nitrogen was applied using an N sensor & variable rate N application and this looks to have worked well to date.  The yield monitor on the combine will tell the full story and the value of variable rate N application.   Winter wheat’s have received there leaf 3 spray and disease control look good.  Winter barley was directed drilled this year and is quite variable compared to previous crops. Crop lost a number of tillers over the winter period as there was a level of slug damage which may have been due to the heavy cover crop.

Spring barley is looking very good with the first fungicide application complete.  There is a level of BYDV present in the crop as we didn’t use an aphidicide as it was early sown plus the aphid traps (yellow bowls) showed low levels of BYDV transferring aphids plus high levels of beneficial predators at time of sampling.  I have estimated that there is ~ 1 to 2% BYDV infection which will not impact on final grain yield.  Disease levels are low in my spring barley but the T2 fungicide is not far away, crop disease levels will be assessed at awns peeping and will be the basis for my 2nd fungicide application. Currently I am looking at cover crop mixes following my spring barley for the 2nd half of August. I have had some issues with slugs in spring barley where I had cover crops of rye and phacelia.  This year I will aim to remove cover crops earlier to reduce slug issues in the following winter & spring crops.   I am looking at including more oilseed rape in the rotation due to higher margins and will consider this when selecting cover crop mixes for the coming season.

I finished drilling malt barley two weeks ago and this week will see the top dressing of nitrogen being applied. I have used protected urea with sulphur on all crops to date but I will use calcium ammonium nitrate (27% N) plus S on the malting barley. Of the straight nitrogen used on the farm this season 90% of it was applied in the form of protected area. This has enabled me to realise a financial saving while also reducing the farms carbon emissions. Getting the urea to spread appropriately involved a considerable amount of adjustment to the fertiliser spreader along with tray testing to establish the spread pattern.

A fungicide and plant growth regulator will be applied to both winter rye and winter barley this week. The last 2 weeks have seen both crops stretch considerable. Both crops received their final application of nitrogen last week in the form of protected urea.

As part of the Teagasc aphid monitoring project I will be placing aphid traps in a crop of spring barley this week. Samples will be collected weekly up to GS31 to establish the quantity and species of aphid that are migrating into the crop. This data from the aphid traps will be used to establish how valid the data coming from the suction tower in Oak Park is for crops in neighbouring counties. Information from the suction tower in Oak Park will enable farmers to make an informed decision if the application of an insecticide to crops is warranted or not.

The final dressing of nitrogen was applied to oilseed rape in liquid form last week. The fungicide Filan was also applied last week at 0.4 kg/ha for sclerotinia control. While in the crop of oilseed rape I observed weaker areas that had not progressed upon further investigation it emerged that these areas were infected with clubroot. This came as a surprise considering that the last time oilseed rape was drilled in the field was 2011 and there was no evidence of clubroot in the crop at the time. However, the field was drilled with a brassica cover crop mix from 2016 to 2019 and was grazed with sheep. In recent years I have stopped using brassicas in my cover crop mixes and it would appear I was well justified in doing so.

I have acquired the use of an N sensor and will use it to scan the winter wheat when applying the T1 fungicide next week. This will enable me to apply the final split of nitrogen based upon the colour of the crop. Areas with plants that are darker in colour will have a higher nitrogen content and will receive less nitrogen in the final split. This will result in better nitrogen use efficiency offering both environmental and financial benefits.