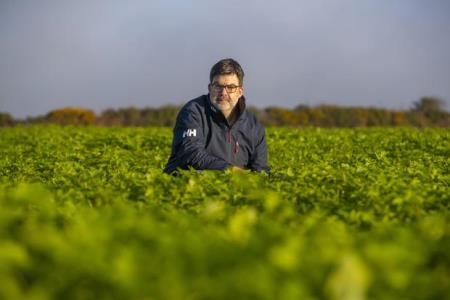 John is a tillage farmer who farms just outside the town of Ferns in county Wexford. John farms his own farm which comprises of 36ha and leases in additional 40ha of land which adjoins his farm.

The main crop that John grows on the farm is spring malting barley along with smaller quantities of winter barley and spring beans. John’s farm is quite typical of the area around the Slaney valley in Wexford.

The free draining nature of the Clonroche series soils that are found across the area are ideal for the production of quality crops of spring malting barley. Regular soil sampling and completion of an accurate Nutrient Management Plan are key for John in order to produce high yielding crops.

The free draining nature of the soil means that it can be difficult to build nutrient levels especially Phosphorus and pH level. It is for this reason that John now imports organic manures onto the farm to try and improve soil fertility and reduce reliance on chemical fertiliser.

While these soils are perfect for the production of spring malt, they do pose challenges in relation to environmental sustainability and in particular to water quality as retention of nutrients within these soils is difficult.

John’s farm is no different in this respect and one of the main focus of the signpost programme on farm will be effective use of cover crops in the system to protect soil and reduce nutrient run off.

To combat this issue, all land that is destined for spring cropping had a cover crop established in order to trap these excess nutrients. As part of the Signpost programme a demonstration was put in place to evaluate the effect sowing date has on catch crop performance. The demo showed that catch crops drilled in mid-August yielded an additional 1 tonne per hectare of dry matter compared to crops drilled in early September. This would mean therefore that the earlier sown crop would have a greater ability to capture excess nutrients. This observation was also recorded in research carried out by Dr. Richie Hackett in Teagasc Oak Park.

The growing season this year has been favourable for the crops on the farm. The Clonroche series soil type that I farm on is extremely free draining and spring crops especially can suffer if they don’t get enough rainfall during the season but thankfully the rain came at the right time this year for both my spring malting barley and spring beans.

I have also competed the harvesting of my winter barley on the farm. The crop was harvested on the 13th of July which is the earliest that I have ever cut winter barley. There are a lot of mix reports in relation to yield of winter barley in my location but thankfully I am happy with the yield I achieved. The majority of my winter barley was drilled after beans and I feel that having a break crop like beans certainly benefitted my overall winter barley yield this year. The variety of winter barley I grew this year was Joyau, which is a BYDV tolerant barley, which means it will not be as affected by BYDV as other varieties on the market. The reason I choose this variety was because I want to reduce the use of insecticides on the farm and growing a BYDV tolerant variety like Joyau is a very effective way of achieving this. Given the yield performance of Joyau this year and the fact that it didn’t require an insecticide, I certainly will be very interested in growing the variety for harvest 2023.

Now that the winter barley harvest is complete and straw has been removed, the next focus will be getting my catch crops established in these fields. Half of my winter barley area this year will be going into spring barley next year so I have a really good opportunity of establishing an excellent catch crop considering I will get it drilled in July and the long growing season over the autumn/winter. The typical catch crop mix I have been using is the leafy turnip/forage rape mix that is very common with many farmers in GLAS. However, this year I am considering some different mixes to see how they will perform. After the winter barley I will be sowing a tillage radish/vetch/phacelia mix. This mix is expensive but I have seen it grown on other farms and I was impressed by the soil conditioning that the tillage radish brings and also the vetch will fix nitrogen which is a big bonus going forward. Although the mix is expensive I feel that getting it in after the winter barley will mean that I will get full utilisation of the crop because of the long growing season.

I also hope to try an incorporate an organic manure into the soil pre catch crop drilling to further build my soil organic matter level. Typically I had been applying slurry in February pre ploughing but that was getting more challenging with difficult weather conditions so hopefully this approach will work well for me.

The weather conditions in the second half of March were perfect for completing the spring crop drilling on the farm. Drilling commenced here on the 20th of March with spring beans and this was closely followed by my main crop which is spring malting barley. Ideally, I would like to get my malt crops drilled in early March to try and decrease grain protein levels, but the weather was not suitable this year. The malting barley varieties that I drilled this year are:

As with all farmers across the country, fertiliser costs for this year is major concern for me. My Teagasc advisor, Ciaran Hickey, completed a nutrient management plan for my farm over the winter and we examined a variety of aspects that I could implement on the farm in order to try and reduce my chemical fertiliser applications.

My most recent soil sample report shows that the phosphorus index across the farm is low with most fields being low index 2 for P and for the past number years I would generally apply 40kg/ha/P to my spring barley crops at sowing. This year I have made the decision to reduce my applied chemical P to 28kg/ha. The K index for most of the farm is very good with many fields being index 4 so I will only being apply crop offtake applications to these fields which will be 80kg/ha.

In addition to the chemical fertiliser applications, I am also using organic manures across my spring crop area. An application of slurry was applied to the majority of this area and this was ploughed down shortly after application. The slurry applied should supply 15kg/ha/P to the crop which in conjunction with my chemical applied Phosphorus will meet the requirement of the crop and also help build -up my soil P index.

I also have a small quantity of winter barley on my farm which received its compound fertiliser in early March. I examined the possibility of applying slurry to the growing the crop of winter barley this year, which would have greatly reduced my chemical fertiliser costs for the crop and would have been an excellent way to utilise the slurry, however, access to the correct spreading equipment and the proximity of the fields to my organic manure storage tank meant that it was not practical this year but I will certainly be instigating ways in which I can carry out in-crop slurry applications going forward.

As part of the Signpost programme, there are a number of large field demos being set up on the farm this year which are being carried out in conjunction with my advisors Ciaran Hickey and Eoin Lyons. These will include:

It will be extremely interesting to see the results from these demos and hopefully I can implement some of the outcomes on my farm going forward.