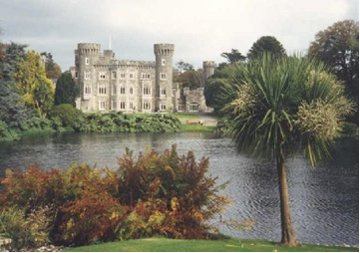 Johnstown Castle was built by the Esmonde family who had come to Co Wexford from Lincolnshire in the wake of the Anglo-Norman Invasion in 1169. The Esmondes became important landowners in succeeding centuries but they were expelled from Co Wexford by Cromwell in the mid 1600s. The Grogan family acquired Johnstown in 1682 by marriage. However, in 1798, Cornelius Grogan was hanged by the British for complicity with the Rebellion. In 1810, his brother John Grogan managed to re-possess the estate. He and his son, Hamilton Knox Grogan, went on to develop the castle, grounds, lakes and estate that we have today.

The walled gardens and hothouses were originally laid out between 1844 -1851 and retain their early deign today. They are surrounded by a high wall and contain 4 acres. The woodland garden includes two lakes; the garden lake covering about 2.5 acres and the castle lake occupies 5 acres. There are many pathways throughout the grounds around the lakes. The sunken garden is now a picnic area located close to the car park. Rathlannon castle is located in the gardens. This single rectangular tower house dates back to 1169 and pre-dated Johnstown Castle. Johnstown Castle has a subterranean passage to an old meatstore that may be seen on the grounds. The entrance to this store is topped and camouflaged by a one-roomed square turreted structure that provides access to the basement of the castle.

The public may access the ornamental gardens and grounds while Teagasc, who is responsible for the entire estate, continue to carry out its research programme on the farm lands.