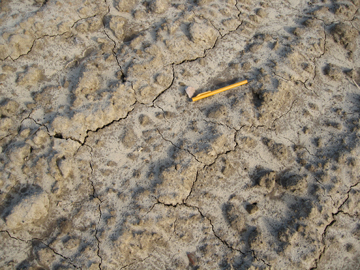 Soil compaction refers to the physical degradation of the soil resulting in densification and distortion of soil where biological activity, porosity and permeability are reduced, strength is increased and soil structure is partly destroyed (European Commission, 2014). The compaction process is generally associated with force applied by mechanised agriculture or by the passage (poaching) of animals. The climatic regime and related high levels of precipitation in Ireland mean that the potential for soil compaction is greater due to wet soil conditions. Compaction can lead to increased surface run-off, flooding, erosion and transport of nutrients and agrochemicals to open water (European Commission, 2014). Compacted soils impede root development which can reduce yields. Along with reduced plant growth, poor aeration induces the loss of soil nitrogen and produces greenhouse gases through denitrification in anaerobic sites (European Commission, 2014).Sub-soiling to relieve compaction requires long periods of dry weather. In Ireland, the wet climate limits this potential; hence prevention is definitely better than cure. 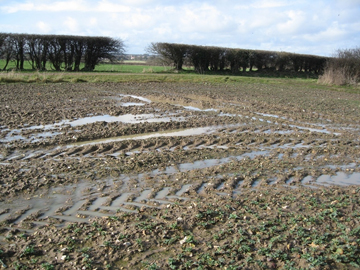 Irish agriculture is dominated by grasslands and with dairy expansion high on the agenda managing for compaction is vital and will require prudent management practices to maintain sustainability. In grasslands, surface compaction occurs due to poaching (hooves) of livestock at high stocking densities or at inappropriate soil moisture conditions. Subsurface compaction results due to passes of heavy machinery used for operations such as slurry spreading. Surface compaction can be managed by decreasing poaching potential through lower stocking densities or careful management such as timing and rotation of grazing and housing of animals. Subsurface compaction can be managed by careful timing of traffic operations and by using reduced tyre pressure. Raper (2005) proposes a soil moisture content of <60% of field capacity, however this could mean wet soils well into spring.

In tillage systems mitigation options are also driven by land management practices. Machinery loads and tyre pressure are important as axle loads continue to increase. However, this can be off-set with lower tyre pressure, increased tyre width or dual tyre systems (Batey, 2009). The number of passes of vehicle per management practice is also important and should be kept to the minimum. Increasingly farmers are utilising permanent tramlines or wheel tracks to control traffic to contain compaction to limited areas of the field. Timing and depth of cultivation/ploughing is another consideration to manage compaction. Although the contracting of machinery and labour limits farmer options, field conditions must be taken into account and especially that appropriate soil moisture conditions exist (Batey, 2009) so that the damage associated with operations is minimised.