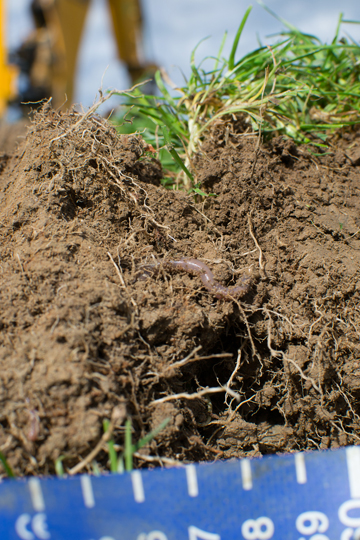 Good soil quality and structure relies on good management of soils. Soil testing is essential in getting the balance of soil nutrients right. Maintaining a pH of between 6.3 and 6.6 regulates nutrient availability and supports biological processes in the soil.

Why is soil structure so important?

Soil structure refers to the shape, size and development of soil structural units or ‘peds’. Soil structure is critical in determining the provision of nutrients, water and air in soil as this is dictated by soil structure. The benefits of good soil structure from an agronomic and an environmental perspective are plenty. These include:

The natural structure of the soil depends upon the texture and organic matter content of the soil. The texture is based on the amounts of sand, silt and clay in the soil. Soils with equal amounts of sand, silt and clay provide a loam texture and represent the optimum soil texture. A ‘crumb’ structure similar to breadcrumbs is considered the best soil structure.

Managing your soil and nutrients

Nitrogen (N) is the main driver of plant growth and protein production. N moves freely through plants, water and air. N availability for plant uptake is important but must be managed given its volatility. N mineralisation relies on soil conditions including temperature, moisture and oxygen. Good soil structure helps to maintain optimum N mineralisation rates as it controls drainage and aeration in our soil. Sources of N include: atmospheric N, inorganic fertilisers, crop residues, animal manures and soil organic matter.

Phosphorus (P) plays a central role in energy regulation of all organisms. The behaviour of this nutrient is opposite to that of N, being tightly bound to the soil particles and is largely unavailable to plants. Total P reserves must be monitored especially in dairy systems as cows invest a lot of P into milk production. Soil P is measured using the Morgan’s Index and an Index 3 is recommended. Below this level, P-reserves can become exhausted.

Potassium (K) is the third macro-nutrient required for plant growth. The behaviour lies between that of N and P. The main effect of K deficiency is reflected in a change in the botanical composition of grass swards changing from productive to unproductive species.