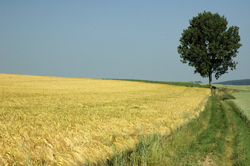 The health related importance of soluble fibre such as beta glucan has long been recognised; it has been shown that beta glucans have a positive effect on glycaemic insulin and cholesterol responses. Cereals such as barley are good sources of these functional ingredients, but to date, barley has not been extensively used as a healthy ingredient in the food industry. Researchers at Teagasc Food Research Centre, Ashtown have milled barley grains and studied the beta glucan levels in the subsequent milled fractions (i.e. endosperm, bran, middlings). As expected, the fractions with the highest beta glucan levels were the outer layers of the barley grain. An interesting finding revealed that the by-product of milling (the middlings fraction) also contained extremely high levels of beta glucan. Each fraction was then substituted for wheat flour (up to 70% levels) in a wheat bread formulation. The properties of the resulting doughs and breads were studied in relation to their rheological characteristics, chemical properties, microstructure, sensory/staling features and beta glucan levels. To date, has been found that an inclusion of 30% of barley middlings increased the beta-glucan content fivefold without negatively affecting the baked properties of the breads. A varietal study (assessing the differences between barley cultivars/varieties) is currently underway.