Martin Connolly farms part-time near Castleplunket, Co. Roscommon and runs a calf-to-beef system taking dairy-bred male calves, through to slaughter as bulls at 20-24 months of age. The farm is in the Teagasc Green Acres calf to beef programme since 2019. James Fitzgerald, Programme Advisor has more

Having now spent the last two years bettering his farming system and building his farms profitability we will take a closer look at how the farm plan is progressing, the work done to date and the plan for the next year on Martin’s farm.

This is a marked improvement in animal performance relative to the year previous when the average weight at 1 year old was 39kg lighter at 284kg. Central to achieving the very satisfactory level of performance is the focus Martin has been putting on herd health and silage quality.

Calves arrive on farm at 3 weeks old from 5 local dairy farms. While care is taken to ensure that all calves are coming from herds with good health status and good track records in calf husbandry, a lot of care still needs to be taken to ensure that calf health is not compromised at an early stage. Having worked closely with MSD on developing a calf health plan, Martin is vaccinating his calves against pneumonia, IBR and clostridial diseases – the details of which can be seen in table 2. 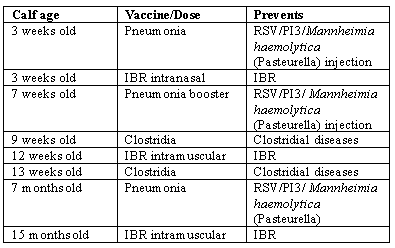 While it must be noted that the vaccination programme implemented does come as a cost of roughly €20/head, it has helped hugely in improving herd health over the last two years and has more than paid for itself. Antibiotic usage and time spent treating sick calves is significantly reduced on Martin’s farm, reducing his vet bill and spring workload. The effect on stock performance is also evident with cattle being well ahead of previous years in weight for age and evenness throughout bunches.

Following on from herd health the other major changes that have been made on Martin’s farm are in the area of animal nutrition. Huge strides have been made in improving silage quality for both the first and second cuts through earlier cutting dates. Data on the silage quality improvements made are visible in table 3.

Although this year has been challenging in terms of growing and harvesting first cut crops, Martin has harvested his first cut crop and expects it to test 70-72DMD for quality which is very acceptable considering the way in which this year’s weather has fallen.

When operating a bull beef system (and any calf to beef system for that matter) having high quality silage is paramount. This is the cornerstone of the bull finishing diet and the weanling wintering diet and must be of high quality in order to ensure that meal usage remains in check.

The key to profitability in bull beef systems is achieving a high level of output to offset the high production costs. In 2020 output of €2,018/ha was recorded (sales – purchases +/- inventory) which translated into a net profit of €105/ha when all costs were accounted for. This was an increase in output of €295/ha versus the previous year, mainly brought about by increased stock numbers reared on the farm.

The gross output of the farm is set to rise again this year to €2,627/ha. An increased number of bulls will be slaughtered in 2021, as due to increased animal performance more of the 2020 calf crop will be slaughtered in 2021 at younger ages than what would have occurred previously. This has allowed Martin to increase the number of calves he purchased this spring to 166 as the shed space to take these extra numbers through the first winter comes available due to the earlier slaughtering of finishing bulls.

Based off similar levels of cost efficiency as years previous, Martin’s farm is projected to make a net profit of €280/ha in 2021 with a negative inventory change of -€209/ha.

Looking more long term, the plan for the farm is to continue to focus on achieving the animal thrive required for all bulls to reach slaughter at 20 months of age. This will allow for all of the shed space to become available for wintering young stock as the bulls will be finished in the same shed space and gone out of the system by the beginning of the young stock’s winter housing spell.

Incremental improvements in grassland management, silage quality and calf rearing costs also have the potential to reduce the variable costs of the farm. Reducing variable costs from 70% to 65% of gross output has the potential to increase the net profits of the farm by €150/ha and will be instrumental to achieving a net profit of €500/ha on this farm. Continuing on the path to achieving the highest levels of efficiency will result in variable costs accounting for just under 60% of gross output, further increasing net profit.