How does your suckler cow measure up?


With greater emphasis on livestock efficiency and it's impact on climate change, Aidan Murray, Teagasc Beef Specialist takes an interesting look at the effects of calving date on subsequent cow and calf performance and profitability, reinforcing the early-calving cow and compact calving benefits

We are constantly being reminded, given all the data proving the inevitability of climate change, that the efficiency of our livestock will have to improve, which will be through a combination of genetics and management.

Our counterparts on the dairy side which practice block spring calving look for compact calving and maximum use of grass with cows expected to milk for 300 days in an annual lactation. Cows that don’t live up to these targets often don’t get a second chance. On the beef side we are seeing improvements in compact calving but it can be improved on further.  I was recently reading an article from Basil Lowman who works with SRUC in Scotland and he makes the point very well that the time in the calving period at which a suckler cow calves (e.g. beginning, middle or end), has a major impact on how hard they work each year and hence their condition, and as a consequence, their productivity.

As an example he takes a herd with a 3 month calving period from 1st March to the end of May. This needs a 3 month mating period, starting on 21st May and ending on 21st August. For this example I have assumed the herd is weaned on 31st October which due to housing constraints may often be the case.

To see the impact of when a cow calves, on the performance of her and her calf, we have compared a cow calving on the 1st of each month and at the end of May. 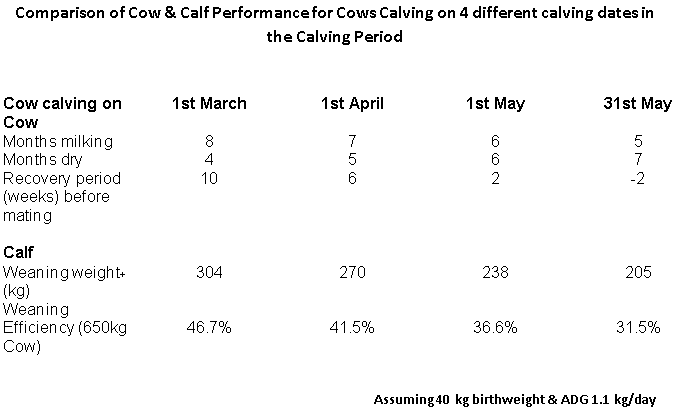 What this means for the Cow...

The first line shows how many months the cow will milk for which is also the age of her calf at weaning. Hence the first cow to calve on 1st March will be milking 3 months (60%) longer and have only a 4 month dry period compared with the 7 months (+75%) for the last cow to calve.

The good news for the first cow to calve is that she will have 10 weeks to recover from calving before the bulling or AI commences. This will have a significant effect on her fertility ensuring she is highly likely to calve early again the following year. In comparison the last cow will still be 2 weeks off calving when the breeding actually starts ensuring that she will calve late again the following year or be barren.

What this means for the Calf...

The first line shows the calculated weaning weight of the calves. There is a 100 kg difference between the first and last calf born resulting in the first calving cow producing 48% more output per year.

We often get the argument that lighter calves make more per kg when sold and often that is true. However, if we look at last weeks IFJ Martwatch figures the top 1/3 of 300-400kg bull weanlings made €2.86/kg. Projecting forward to 31st October our first calf at 304kg would be worth €869. The last born calf at 204kg would have to make €4.24/kg to equal the price of the heavier calf and currently they are making €2.98/kg.

The first cows to calve will:

These figures clearly demonstrate that the most productive/profitable cow in a commercial suckler herd will be amongst those calving in the first 3 weeks and the least profitable amongst the last to calve. This reinforces the efficiency benefits of having a compact mating/calving period.